Any action, intentional or unintentional that is based on race or skin color and that subordinates an individual or group based on skin color or race is racism. Racism can be enacted individually or institutionally.13 However, much of the scholarship on racial issues over the last 40 years has focused on individual racism.14 Nevertheless, institutions are just as capable of being racist. Institutions can behave in ways that are overtly racist (i.e., explicitly excluding Blacks from services) or inherently racist (i.e., adopting policies that result in the exclusion of Blacks). Most of the underlying causes of health inequities are due to institutional racism. As Professor Mary Douglas explains:

“When individuals disagree on elementary justice, their most insoluble conflict is between institutions . . . . The more severe the conflict, the more useful to understand the institutions that are doing most of the thinking. Exhortation will not help. Passing laws against discrimination will not help. . . . Only changing institutions can help. We should address them, not individuals, and address them continuously, not only in crises.”

Institutions can respond to Blacks and Whites differently. Institutional behavior can injure Blacks, and when it does, it is racist in the outcome, if not in intent.

To understand institutional racism, it is crucial to understand the interaction between prejudice and discrimination. Prejudice is an attitude that is based on limited information or stereotypes. While prejudice is usually negative, it can also be positive. Both positive and negative prejudices are damaging because they deny the individuality of the person. No one is entirely free of prejudices, although they may not have any significant prejudice against a particular group. Oppression is the systematic subjugation of a social group by another social group with access to social power. Power is the ability to control access to resources, the ability to influence others, and access to decision makers. Discrimination is behavior, intentional or not, which negatively treats a person or a group of people based on their racial origins. In the context of racism, power is a necessary precondition for discrimination.

Racism depends on the ability to give or withhold social benefits, facilities, services, opportunities, etc., from someone entitled to them, and is denied based on race, color, or national origin. The source of power can be formal or informal, legal or illegal, and is not limited to traditional concepts of power. The intent is irrelevant; the focus is on the result of the behavior. 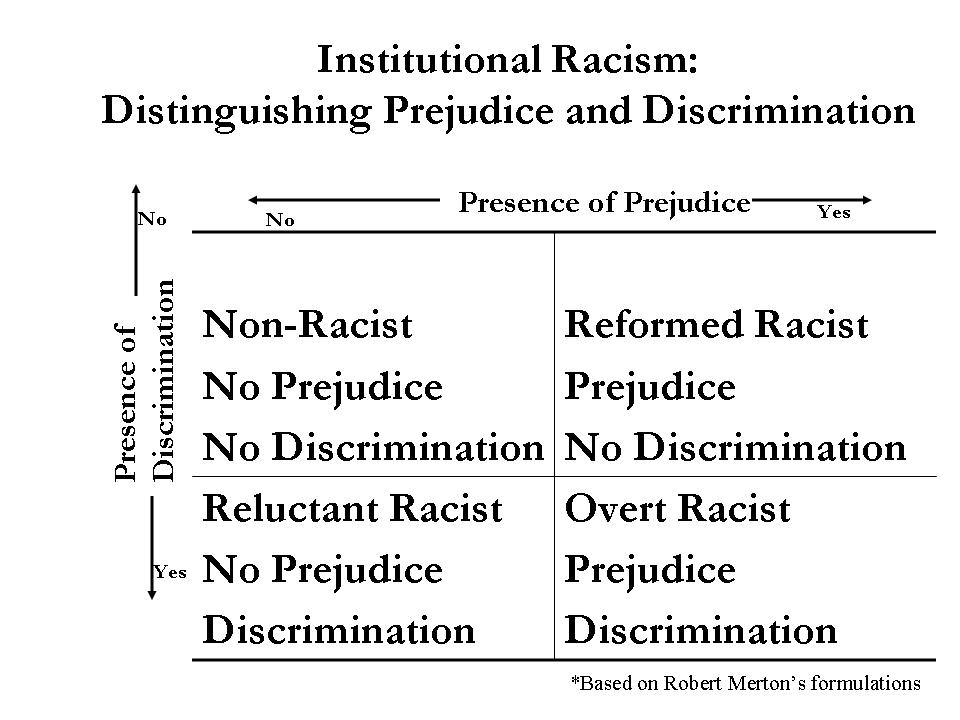 A “reformed racist” institution has definite biases or prejudices against Blacks but does not act on them. For example, an institution could hold a belief that Blacks are more likely to abuse pain medication, but notwithstanding those prejudices, pain medications are prescribed to Blacks equitably. In this situation, the institution makes no difference in health care based on race. This form of racism involves institutions that harbor biases or prejudices but are either too timid to discriminate or who are actively working on not discriminating. The prejudices or biases are still present, but these institutions do not act on them.

An “overt racist” institution has definite bias or prejudice and definite discriminatory behaviors. For example, individuals in an institution could hold a belief that Blacks are more likely to abuse pain medication, and because of those prejudices, pain medications are prescribed to Blacks differently than they would be to Whites. Most people are familiar with this form of racism. Overt racism involves actively and intentionally expressing bias or prejudice and actively discriminating against others in public and private ways. Most discrimination in health care is not overt.

A “reluctant racist” is an institution that purports to have no negative biases or prejudices against Blacks but has definite discriminatory behaviors. For example, an institution could hold no negative beliefs about Blacks but prescribe pain medications differently to Blacks as an indirect result of some other policies. This is the most pervasive form of racism and also the hardest to challenge. Reluctant racism occurs due to mistaken stereotypes, biases, or prejudices that are acted out in an unthinking manner or through policies, practices, or procedures of institutions that have a disproportionately negative impact on Blacks.17 Often, the behavior is motivated by non-race based reasons (e.g., economics). Because of this non-racial motivation, individuals leading and managing institutions usually do not believe that their institutions are being racist. Furthermore, it is even more difficult for institutions to change their behavior. For example, some teaching hospitals do pelvic exams on unconscious female black patients in surgery without the patient’s consent to train interns, and the hospitals do so without a conscious desire to discriminate. These hospitals would fit into this category of reluctant racist. As Kwame Ture (a.k.a. Stokely Carmichael) and Charles Hamilton explained in their landmark book, “Black Power: The Politics of Liberation”:

“When White terrorists bombed a Black church and killed five Black children, that is an act of individual racism, widely deplored by most segments of the society. But, . . . [when] Black babies die each year because of the lack of proper food, shelter, and medical facilities, and thousands more are destroyed and maimed physically, emotionally, and intellectually because of conditions of poverty and discrimination in the Black community, that is the function of institutional racism.”