This Is Minnesota: An Analysis of Disparities in Black Student Enrollment at the University of Minnesota Law School and the Effects of Systemic Barriers to Black Representation in the Law 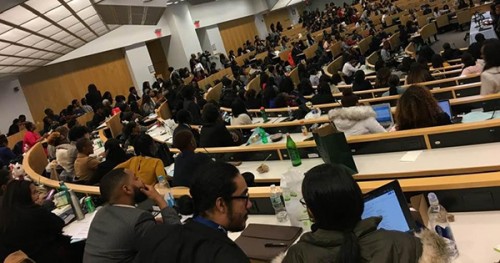 Lawyers often occupy powerful positions in the highest levels of our government and economy. Whether drafting legislation, prosecuting or defending crimes, representing indigent clients in housing court, or finalizing corporate mergers, attorneys influence and operate within one of the most critical professions in the United States. Lawyers can have a profound impact in designing and changing laws, influencing major policy regimes, and leading cities and communities. The law is often lauded for being a tool to guide society--a method to promote a system of justice and fairness. But for too long, the law has enforced a system of justice based in White supremacy and oppression. Laws were designed and implemented to steal land from indigenous communities, to enslave and oppress Africans, and to force Japanese-Americans into internment camps, amongst many other atrocities. To this day, the law is used to both expand and diminish civil rights as we continue to struggle to ensure all people are treated equitably within our society. Whether the level of power and influence in the hands of attorneys is overinflated remains an important question. However, this Article seeks to bring attention to those we are training and educating to wield this power and influence. Within the legal profession and legal education system, we must be more proactive in examining who we are leaving out and whose voices are not given a chance to be a part of this profession.

With many students becoming leaders within the legal, political, and business community, it is imperative that Minnesota Law make a more concerted effort to attract, admit, and educate a student body representative of the communities we live in and the communities we serve. We must reckon with the nature of the legal system within which we are trained: one that is built upon a system of oppression and inequity often touted as justice, safety, and fairness. A student body more reflective of the communities we live in and serve is only the first step in enhancing the legal profession's capacity to equitably and effectively serve all individuals and communities who seek legal assistance.

This Article seeks to emphasize perspectives often pushed away from legal education and the legal system. Not only does this Article present the experiences of Black students to highlight their unique and nuanced perspectives, but also to offer an alternative to the supposed objective nature of our legal system and education. In the classroom, law students are encouraged to subvert their individual experience with the presumed objectivity of the law. However, this lens of “objective logic” is rooted within the same system of White supremacy and oppression which has guided our society and legal system for centuries. Through this lens, the law diminishes the ideas and voices of those who do not share these experiences. Our legal system and legal education must adapt by incorporating and understanding perspectives of all those who seek to become attorneys, as well as those within the communities we serve.

Part I of this Article presents the personal narratives of three students currently enrolled at Minnesota Law. These courageous students have chosen to share stories of their path to law school and the barriers they faced as Black students traversing the United States' educational system.

Part II discusses the experiences of students and alumni of Minnesota Law collected through interviews and surveys within the Minnesota legal community.

Part III presents an empirical analysis of the disparities within student enrollment at Minnesota Law.

Part IV explores the ways in which these disparities inhibit the legal profession and legal system.

Finally, Part V proposes a series of actions that Minnesota Law should take to remedy some of the harms caused by these disparities and enhance the educational environment to contend with the realities of racism within the law.

The ultimate fault is that too many higher education institutions and the public resources to support them exist for the elite upper classes while too few exist for the masses. But in the end the total society pays double. Because we fail to fully overcome the burden of historic exclusionary and discriminatory racial practices in the education system, we fail to fully use and develop our most valuable national resource, our human resource.

The law is accorded a great deal of power, but actions to reform the current state of the legal system and legal education must truly contend with the nature of the harm. Individual seminars to increase awareness of racism or implicit bias or press releases that report solidarity with Black attorneys and attorneys of color without simultaneous action to meaningfully increase support and opportunity throughout the legal system are insufficient to reckon with the gravity of these issues.

This Article has depicted stories of some of our law school's most courageous students and the nefarious barriers of racism they have repeatedly faced throughout their lives and educational path on the way to Minnesota Law. Their stories must be a further reminder of the despicable ways in which racism constantly inhibits the lives of many Black individuals here in Minnesota and throughout the country. For too long, Minnesota Law has failed to create an educational environment that is attractive, supportive, and desirable for Black students. We hope that this Article serves as a catalyst for additional work at Minnesota Law, as well as in numerous other sections of legal education and the legal profession.

Maleah Riley-Brown is a second-year law student at the University of Minnesota Law School.

Samia Osman is a first-year law student at the University of Minnesota Law School.

Justice C. Shannon is a first-year law student at the University of Minnesota Law School.

Yemaya Hanna is a second-year law student at the University of Minnesota Law School.

Brandie Burris is a second-year law student at the University of Minnesota Law School.

Tony Sanchez is a first-year law student at the University of Minnesota Law School.

Joshua Cottle is a third-year law student at the University of Minnesota Law School.