Fracking in Pueblo and Diné Communities 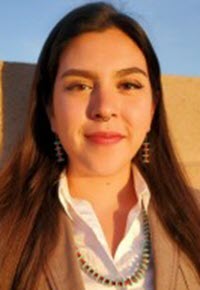 Located in the seemingly barren, yet beautiful, desert of northwestern New Mexico, the living and historic Greater Chaco landscape is surrounded by hundreds of oil and gas wells. For the fossil fuel industry, these oil and gas deposits are just the beginning. While commonly thought of as a National Park that protects impressive archaeological ruins of a complex ancient society, Chaco Culture National Historical Park and its surrounding area actually composes a sacred landscape for several tribes. For thousands of years, tribes have depended on this landscape for clean water, subsistence, and cultural uses. In recent years, however, the landscape surrounding Chaco Culture National Historical Park has come under threat by fossil fuel companies who wish to extract oil through hydraulic fracturing, also known as fracking. This proposed fracking would impact the integrity of the Chaco landscape as a priceless cultural resource and compromise the health and safety of indigenous communities who call the area home.

Proposed and ongoing fracking in the Chaco landscape presents water-related environmental justice issues for Pueblo and Diné communities in New Mexico. Indigenous communities are uniquely vulnerable to fracking because of their socioeconomic status and relationship to their homelands where fracking takes place. In particular, because water plays a large and distinct role in indigenous cultures, lifeways, and political movements, fracking disproportionately impacts Southwest indigenous communities. The Bureau of Land Management and the Bureau of Indian Affairs recently released the long-awaited Farmington Mancos-Gallup Draft Resource Management Plan Amendment and Environmental Impact Statement, which amends the original Environmental Impact Statement for the Chaco Canyon area. This plan, while meant to account for different uses of the area and different impacts of additional fracking wells on nearby communities, does little to put the affected communities at ease.

A fracking ban is warranted because fracking is unregulated, potentially threatens both groundwater and surface water, and lacks effective and efficient remediation. Moreover, given that indigenous peoples of the Southwest experienced extreme land dispossession throughout various periods of colonization, and are still denied full autonomy over lands that are culturally and politically significant to them, a fracking ban is particularly warranted in the Chaco landscape. The United States' legal system, specifically environmental and administrative law, fails to adequately regulate fracking in indigenous communities, and thereby continues to uphold this history of colonialism and white supremacy. The story of fracking in the Chaco region is more than just one isolated incident; the phenomenon of the fossil fuel industry harming indigenous peoples is endemic to the experience of colonized peoples.

To move forward from these injustices, tribes and indigenous communities must assert tribal cultural sovereignty, coregulate federal and state lands outside tribal borders, and promote anti-authoritarian approaches, such as grassroots movements, to ensure water protections for Pueblo and Diné communities in New Mexico. These strategies are essential to maintaining a healthy environment for Pueblo and Diné peoples and the future of all New Mexican communities.

We are the land. More than remembered, the Earth is the mind of the people as we are the mind of the earth ... it is not a means of survival ... It is rather part of our being, dynamic, significant, real.

Fracking has a long and complicated history for the U.S., tribes, and indigenous communities. While activists and scholars have brought attention to the potential harm to communities near fracking operations, indigenous communities are still attempting to grasp the numerous and unique ways that fracking causes harm to their people. Certain methods of correcting this harm, such as more comprehensive regulation, may be ineffective or entirely incapable of addressing the widespread damage fracking does to indigenous cultures. Thus, tribes and indigenous communities should continue to build power and fight for broad structural changes. It is important to acknowledge the political infeasibility of imposing bans on fracking and the extreme discretion that agencies have in implementing regulations, as such factors further highlight the importance of indigenous grassroots movements. These movements are representative of a greater, and historically ongoing resistance for a sustainable and just way of life.

Fracking has ravaged not just the Chaco landscape, which holds the ruins of the ancient Pueblo society, but the Pueblo and Diné communities of New Mexico who call the area home. These communities consider themselves to be a part of the landscape, not a separate component that can be removed at will. Fracking in any indigenous sacred landscape conjures two fundamental disagreements: 1) What is the value of resources like land and water? and 2) Who should control these resources? These disagreements are like a hidden illness or growing tumor, causing pain but never truly revealing themselves. Consequently, the two warring positions on each side of the fracking debate continually talk past each other without ever making a diagnosis. While these disagreements may never be amicably resolved, more light must be shed upon them in order to stop the dangerous impacts of fracking on Pueblo and Diné communities.

Melodie Meyer is a Legal Fellow at the Yurok Tribe Office of the Tribal Attorney. She is a citizen of the Pueblo of Laguna.