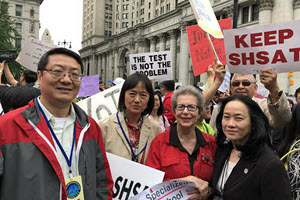 The November election of Donald J. Trump as the 45 U.S. President heightened ever-growing concerns about a retrenchment of civil rights for Americans, limiting voting rights, invoking tougher criminal penalties, keeping Guantanamo Bay prison open and returning to aggressive interrogation techniques, mass deportations and stricter immigration laws. Immigration holds particular relevance for Asian Americans because the majority of Asian Americans are foreign-born, and they along with Latinos, are among fastest growing immigrant groups in America. This immigration stream shows that immigration has never been a white/brown issue even though mainstream America tends to think of immigration as an issue only affecting Latino/a immigrants. On the contrary, immigration law and historical exclusion have shaped the Asian American legal and political identity within the existing U.S. racial hierarchy: whites on top, African Americans on the bottom, and Asian Americans as somewhere in-between. The majority of Asian Americans have been identified as immigrants or children of immigrants. Asian immigrants from Asian countries face the longest backlogs for visas. The perennial connection between race and immigration comes up often. historically and as seen and felt in last year's presidential election, race and immigration status have enhanced the unpopularity of immigrants who have become scapegoats for the nation's economic troubles.

Critical race theorist Ian Haney Lopez answers that the efforts to seal the borders allowing no one to come into this country combined with arguments about the issue of illegal immigration has nothing to do with an immigrant's racial background are disingenuous because they share “deep similarities with racial hysteria that accompanied the mass deportation of Mexican Americans during Operations Wetback in the 1950s, and the Asiatic Barred Zone that prohibited all Asian immigration through the first half of the twentieth century.”

Many citizens in the waiting, including1.3 million Asian American undocumented immigrants were hoping that that immigration reformers would happen during Obama's presidency, those hopes were dashed when a deadlocked Court last term in United States v. Texas left in place the nationwide injunction barring implementation of the Deferred Action of Parents of Americans and Lawful Permanent Residents (DAPA) and expansion of the 2012 Deferred Action for Childhood Arrivals (DACA) program, which would have provided deportation relief for up to four million unauthorized immigrants.

As this past election cycle, along with continued debates over affirmative action, immigration, police brutality, and reports of hate crimes, demonstrate, this country is far existing in the “post-racial era” that was proclaimed by some pundits when Obama, this country's first African American President, was elected into office eight years ago.

Against this backdrop, it is imperative that social coalitions for justice continue to band together during these uncertain times. To be sure, despite the cultural and class differences and the potential conflicts and impediments that have arisen, African American, Latino, and Asian American civil rights groups have joined together to preserve affirmative action and immigration, to support lesbian, gay, bisexual, transgender (“LGBT”) issues; and to advocate for criminal justice reform and against mass incarceration. Perhaps not widely-known, these issues are key components of the Asian American civil rights agenda, which has gradually expanded to accommodate the most pressing issues that affect communities of color and subordinated individuals. As this Article discusses, the past few decades of coalition building between African Americans, Latinos, Asian Americans, and others offer reasons for some optimism about future possibilities notwithstanding a Trump Presidency, a Republican-controlled Congress, and Department of Justice led by Jeff Sessions which could translate into immigration policies and guidelines targeting immigration violations, speeding up deportations, and limiting federal funding to cities refusing to cooperate with the Department.

This Article suggests that given the unique place that Asian Americans are situated in race relations in the U.S.--a racial group situated between black and white--they can inform the struggle for social justice, which has never been binary. This Article draws upon the interdisciplinary areas of social science, critical race theory, and Asian American legal scholarship to explore the manner in which Asian Americans are treated differently form other racial groups, which as seen in affirmative action, same-sex marriage, and criminal justice, can inform litigation and community activism strategy. Professor Eric Yammamoto calls this, “critical inquiry into the interplay between law and racial hierarchy.”

Far from being a single monolithic voting block holding a particular perspective on important social issues. Asian Americans are a diverse community made up of many ethnicities, holding divergent opinions. For instance, there are Asian immigrants who are against affirmative action, same-sex marriage, and do not agree with the Black Lives Matter movement. These conservative Asian immigrants are deeply insular, and deny the existence of racism, unless it affects them. These Asian Americans act of self-interest, and do not work with other Asian groups or communities of color in fight for social justice. But there are also more assimilated Asian Americans, who may have familial ties span a generation or more in the U.S., willing to work together with others seeking fairness and social justice for all, regardless of skin color or sexual orientation.

While divergent views arise on the many social and political issues amongst Asian Americans, this Article is limited to a discussion of three topical issues: (1) affirmative action; (2) same-sex marriage; and (3) police brutality. I have chosen these issues because there have been recent Supreme Court decisions and recent litigation concerning them. This Article is distinguishable from existing scholarship about Asian Americans and the because it connects three areas of civil rights litigation that are rarely discussed together, or at least in relationship to Asian American advocacy. Far from being an academic discussion applying theories to hypothetical parties in the abstract, this Article anchors itself in Supreme Court cases, trial court litigation, and advocacy by real people at the grass roots level.

This Article is divided into four sections. Part I summarizes the process in which Asian Americans have become honorary whites in this country. Historically, Asian Americans were first perceived as foreigners and then were transformed as model minorities, and during all times, compared to African Americans, and other racial groups. The section discusses how this narrative of pitting of one minority groups against another continues to this day.

Part III discusses the participation of Asian Americans in the same-sex marriage litigation involving state and federal governments, who denied an entire and identifiable group of people important benefits based solely on their membership in a disfavored class. Gay and lesbian Asian Americans find themselves in a precarious place. While some of the hardships facing Asian Americans overlap with some of the struggles experienced by the LGBT community, Asian Americans who are also LGBT, may feel alienated by their ethnic community, other racial groups, and general interest advocacy groups. Even so, as this section explains, Asian American support for LGBT issues were an opportunity to move beyond traditional conservative or regligious beliefs for the sake of justice and the greater good. This section culminates with an analysis of the recent landmark case, Obergefell v. Hodges which held that the right to same-sex marriage is a fundamental right under the Constitution.

Part IV carries over the familiar theme mentioned supra Parts One through Three: the divergent opinions held by Asian Americans can help or hinder efforts toward social justice. Part IV examines the possibilities of coalition building between Americans and African Americans and Latinos in the struggle against police brutality, police misconduct, and mass incarceration, and overcoming existing barriers in building interracial solidarity. This Article concludes by arguing that Asian Americans should not distance themselves from racial issues, or refraining from opportunities to work with other racial groups, and joint racial justice efforts, but should instead stand alongside other like-minded brethren in taking a principled stand against the politics of whiteness and subordination.

Hopefully, this Article has demonstrated that race, whiteness, and honorary whiteness are social constructions that have been historically and modernly deployed for socio-political reasons against minority groups and others subjugated and excluded from being full members of American society. Using the examples of affirmative action, equality litigation, and the repeated calls for criminal justice reform, the discussions presented have further shown that these issues involve everyone seeking social justice. More so than ever, it is imperative for coalitions standing up for justice, along with all civil rights advocates, to see beyond short-sighted cultural, racial, gender, and class differences given these uncertain times.