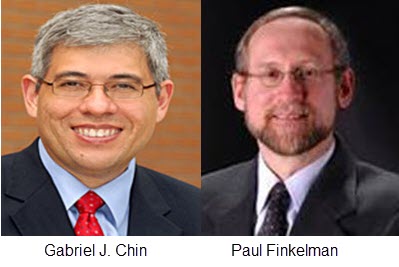 From the Founding of the United States until 1952, federal authorities often denied or questioned the citizenship of non-white immigrants and their children. Before the passage of the Civil Rights Act of 1866 and the ratification of the Fourteenth Amendment in 1868, the “rule of law” in the United States was that no one of African descent could be a U.S. citizen. Even after the adoption of the Fourteenth Amendment there were persistent questions about the citizenship status of Asian immigrants and their American-born children, Puerto Ricans, Mexicans, and Native Americans. Similarly, some now question the entitlement to U.S. citizenship of children of undocumented noncitizens and other immigrants born in the United States. The text of the Constitution seems to plainly grant them citizenship: Section 1 of the Fourteenth Amendment provides that “all persons born or naturalized in the United States, and subject to the jurisdiction thereof, are citizens of the United States, and of the state wherein they reside.” The debates over the passage of the Amendment in the House and the Senate illustrate that Congress assumed the language meant what it said. For example, in the face of vicious anti-Chinese sentiment, Congress stood firm on birth-right citizenship. Senator Edgar Cowan, a conservative Republican who opposed African American citizenship, directly asked if the Fourteenth Amendment would “have the effect of naturalizing the children of Chinese and Gypsies born in this country.” Senator Lyman Trumbull, who had drafted the Thirteenth Amendment two years earlier, answered tartly: “Undoubtedly,” and no Senator contradicted him. Senator Trumbull's view was consistent with the English tradition of birthright citizenship recognized in Calvin's Case in 1608 and followed in early American decisions. Yet, today the debate rages.

The most serious argument that there is less to the Fourteenth Amendment than meets the eye comes from the scholarship of political scientist Rogers Smith and law professor Peter Schuck. In their 1985 book Citizenship Without Consent: Illegal Aliens in the American Polity, they argue that as a republic rejecting the idea of monarchy, membership in the polity--citizenship--must be by agreement of the people. Under our government, the consent of the people comes through Congress. Of course, the Fourteenth Amendment is an act of the people through both Congress and the States, but they argue that this is insufficient evidence of consent. They assert that in 1868, when the Fourteenth Amendment was ratified, “[i]mmigration to the United States was entirely unregulated,” and thus there were no “illegal aliens” for Congress to consider. They further argue that because Congress and the states simply did not even consider the possibility that there might someday be people in the United States whose presence was prohibited by law, the Fourteenth Amendment does not automatically make the American-born children of undocumented migrants part of the political community. Now that we have federal laws restricting immigration and providing for exclusion and deportation, they believe Congress faces an entirely new situation unforeseen by the framers of the Fourteenth Amendment. Accordingly, they argue, Congress has the power, by enacting a statute, to deny citizenship to the children born here of those present without authorization of U.S. law.

Immediately after the publication of Citizenship Without Consent, and regularly since, some conservative politicians and commentators have been captivated by the argument that children of undocumented migrants can be denied citizenship. Most recently, President Donald J. Trump stated: “We're looking at that very seriously, birthright citizenship, where you have a baby on our land, you walk over the border, have a baby - congratulations, the baby is now a U.S. citizen. ... It's frankly ridiculous.” While Professors Smith and Schuck “strongly favor even more legal immigration than the U.S. now accepts, and a generous amnesty for those now here illegally,” a range of immigration restrictionists and white nationalists have enthusiastically embraced their argument that the Fourteenth Amendment does not provide birthright citizenship for children born in the U.S. if their parents are undocumented migrants.

There have been many critiques of the work of Smith and Schuck. As Neil Gotanda wrote: “Reviewers have critically examined Schuck and Smith's proposal as a question of ethical theory, of political theory, of constitutional law, and of social policy.” Professor Gotanda added his own critique, and there have been others since.

A telling objection came from Professor Gerald Neuman who pointed out that, whatever else it did, the citizenship clause unquestionably granted citizenship to the formerly enslaved African Americans born in the United States. As we note later in the Article, the parents of some of those children had been trafficked here in violation of federal laws regulating or prohibiting the slave trade, and were in fact living in the United States in violation of federal law. Accordingly, whatever else “subject to the jurisdiction thereof” might mean, it necessarily included the children of unauthorized migrants.

In response to President Trump's restrictive immigration policies and interest in revisiting birthright citizenship, Professors Schuck and Smith have once again placed their argument before the public and policymakers, and they contend that three decades of scholarly criticism have not undermined their argument. In a Washington Post op-ed they argue:

The 14th Amendment's citizenship clause did not even address, much less resolve, the question of citizenship for the U.S.-born children of undocumented immigrants ... [because] the federal government was not then restricting immigration. (The U.S. slave trade was banned by this time, but that was not immigration in any sense we think of it today.)

In a longer article in National Affairs, they contend:

In thinking about what the Citizenship Clause's “subject to the jurisdiction” proviso was intended to mean, recall the obvious fact that the category of immigrant parents here in violation of U.S. law simply did not exist at the time. Federal regulation of immigration (other than a ban on the international slave trade, foreshadowed in the original Constitution) did not begin until 1875. Some states had enacted public-health requirements for immigrants, but Congress did not enact significant bans, especially limited quotas, until well into the 20th century.

However, in these works neither Professor Neuman nor Professors Smith and Schuck closely examined the slave trade laws to explore how they operated, and their similarities and differences from “immigration” laws. Nor have they considered early acts which actually prohibited the immigration of free people of African ancestry. This Article examines the slave trade laws and those banning black immigrants to challenge the contention that “the category of immigrant parents here in violation of U.S. law simply did not exist at the time” and that the slave trade “was not immigration in any sense we think of it today.”

Of course, U.S. laws banning the African slave trade differed in many respects from the much more comprehensive Immigration and Nationality Act currently in effect. Forced and trafficked migrants such as those victimized by the slave trade undoubtedly are in a different position than those who immigrate voluntarily. Yet, there are also similarities between the slave trade laws and modern immigration law. For example, because the coverage of current immigration law extends to involuntary migrants and to trafficked persons, it now applies to enslaved persons. Because the institution of slavery affected the composition of the people of the United States, Professor Rhonda Magee has argued that the slave trade should be understood as part of immigration, even if the trafficked Africans were “unwilling immigrants.” This Article understands immigration policy as designed to “shape [] the destiny of the Nation” by using legal tools to determine “(1) who may enter the country and (2) who may stay here after entering.”

As Part I explains, the legal feature of modern immigration law that seems salient to Professors Smith and Schuck is exclusion and deportation--the decision of Congress that some people are allowed to enter and remain in the United States because of their perceived good qualities or lack of bad qualities, while others are kept out or required to depart. On this basis, the laws regulating and then banning the African slave trade and the entry of free blacks were tools of selective immigration policy just like modern immigration legislation.

Like other immigration laws, the slave trade laws determined who would be allowed to come to the United States, and what would happen to them if they arrived in the country in violation of law. The laws used now ubiquitous methods of immigration control, including interdiction, incarceration, and deportation. Under the Slave Trade Act of 1819, Congress authorized that illegally trafficked slaves be sent, at government expense, to Africa, after 1822 to a settlement created in Liberia, operated by a private organization with extensive governmental connections, the American Colonization Society (“ACS”). This deportation occurred even if the victims of the illegal trade might have preferred to stay in the United States, and even though few or none of the trafficked victims were from Liberia.

Congress purposefully designed these laws to shape the demographics of the U.S. population. In this way, they were akin to laws recognized as immigration regulation such as the Chinese Exclusion Act of 1882 or the Immigration Act of 1924, with its highly restrictive National Origins Quota System, and for that matter the Immigration and Nationality Act in force today.

Part II offers an additional reason to show why the drafters of the Fourteenth Amendment cannot be imagined to have been ignorant of, or unaware of, the possibility of undocumented migration. Immigration restriction of free people from Europe and China had been, for decades, a political issue in the states and Congress. For its part, the federal judiciary had long made clear that the government could regulate immigration, and had the power to ban or deport undesirable noncitizens.

Because the slave trade laws (including the 1803 law which prohibited bringing free people of color into states prohibiting their entry) regulated immigration, Professor Neuman's argument about the slave trade is conclusive. Congress had indeed identified a category of people who were not allowed to be here, and who could be deported under federal law if found in the United States. Nevertheless, through the Fourteenth Amendment, Congress made the children of illegally imported slaves and free blacks U.S. citizens if born in the United States. Accordingly, any statutory or regulatory attempt to deny citizenship to the children of unauthorized migrants would be unconstitutional because of the decision of the enactors of the Fourteenth Amendment to grant citizenship to the children of foreign born people who were illegally in the United States in 1868.