Our Rightful Place in the Sun: Marcus Garvey and the 1920 Declaration of Rights of the Negro Peoples of the World

Excerpted from Steven LB Jensen,  Our Rightful Place in the Sun: Marcus Garvey and the 1920 Declaration of Rights of the Negro Peoples of the World,  MAVERICK CITIZEN (August 13, 2020)(Full Document) (Last Visited: August 17, 2020)

Drafted and adopted in New York at the first annual convention of Marcus Garvey’s Universal Negro Improvement Association, the Declaration of Rights of the Negro Peoples of the World laid out many themes that have continued to shape human rights debates up until today. A forgotten document, its story deserves to be brought to light – perhaps more than ever in a year that has brought racial inequalities and the #BlackLivesMatter movement to the forefront of international political debate

Liberty Hall is brimming with excitement. Reportedly 12,000 people are in attendance. Jamaican-born Marcus Garvey, who had recently founded the Universal Negro Improvement Association (UNIA), takes the podium. At this first-ever annual convention, he explains that collectively they have spent the last two and a half years spreading “the doctrines of the UNIA to the four corners of the world”. Responding to the national and global politics of the postwar moment, a leading UNIA figure states: “We fought, bled and died on the battle plains of France and Flanders that the world might be ‘made safe for democracy’. The reality that Blacks face at this moment, however, is a far cry from this aspiration.”

To all those gathered, Garvey outlined the vision for the coming days:

“This convention of the UNIA is called for the purpose of framing a Bill of Rights for the Negro Race. We shall write a constitution within this month of August that shall guide and govern the destiny of four hundred million Negroes of the world.” 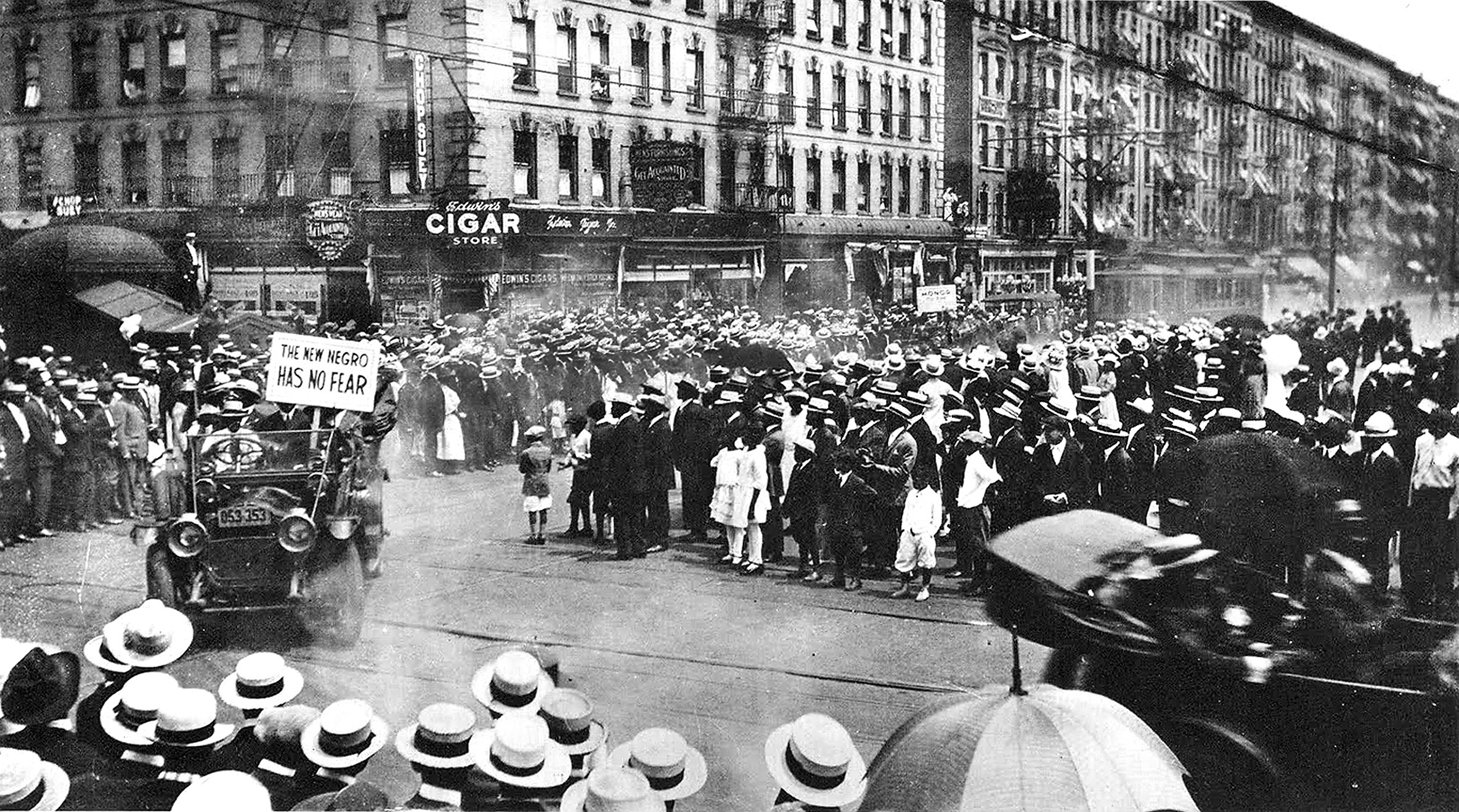 UNIA parade in Harlem, reported as being both from 1920 and 1924. (Photo: commons.wikipedia.org)

On the second day of this month-long convention more than 20,000 gather at Madison Square Garden in New York City. A parade fills the streets of Harlem on 2 August where the participants carry banners with inscriptions such as “Down With Lynching”, “Africa Must Be Free”, “The Negro Gave Civilisation to the World”, and “United We Stand for African Liberty”. One rather unique banner carries a historically informed reference to the Haitian Revolution putting the coloniser in his place: “Toussaint L’Ouverture Was an Abler Soldier Than Napoleon.”

The UNIA was feeling the force of a profoundly racist society and these demonstrations stimulated media coverage; not to mention the continued attention of the FBI who had been monitoring Garvey, intent on undermining him and his movement.

After America entered World War I in 1917, there had been a sharp increase in violence against black people. In 1918 alone, there were more than 100 lynchings reported in the United States – in addition to race riots and massacres targeting African-Americans such as the one in East St Louis in 1917. In the aftermath of the First World War, empires were falling in Europe while imperial power was being consolidated elsewhere. Independence movements in Ireland, China, Egypt, India and Eastern Europe did, however, take inspiration from US President Woodrow Wilson’s call in 1918 for self-determination as a principle.

The Universal Negro Improvement Association responded to these developments by inscribing itself as a movement for African independence challenging both imperial rule abroad and brutality and oppression in the United States. Garvey argued that the UNIA convention consisted of “the delegates of the 400,000,000 Negroes”. The agenda had a threefold purpose which demonstrated the scope of their ambition: to discuss “the great problems that confront the Negro; … framing a bill of rights for the Negro peoples of the world; … [and] laying plans for the redemption of the great continent of Africa.” The convention was to be a political manifestation that would send a message to the world that black people were mobilising for their rights and for their freedom.

The convention’s first week was focused on speeches by delegates about the discriminatory and devastating living conditions that black people faced in the United States, the Caribbean and across Africa. They were enlightening for the participants, but they also served another important purpose: to ground the drafting of the Declaration in lived experiences:

Articulating and drafting these aims began in the second week. The effort to do so was a collective one evidenced in the sizable number of people who signed the final declaration. The Universal Negro Improvement Association that Garvey had established was a multi-faceted undertaking. While there is a larger debate about Marcus Garvey’s complex character and legacy there can be little doubt about his and the UNIA’s historical significance.

The declaration was a project of black empowerment through human rights. If we are interested in a fuller appreciation of 20th-century global history and politics – especially as it relates to questions of race, imperialism, black internationalism, decolonisation and democracy – this particular moment in history may illuminate a major theme that begs further exploration, namely that of human rights. As Garvey explained to the crowd:

For whatever reason, there have been relatively few references to this moment in history. The Declaration on Rights of the Negro Peoples of the World is completely ignored in international human rights histories – which has otherwise been among the most dynamic fields of study within the discipline of history over the last decade. The 1920 declaration is also ignored in the relatively comprehensive scholarship on Marcus Garvey. Occasionally, the declaration has received a noteworthy assessment in a one-line statement by a scholar only to be overlooked immediately after without exploring the actual contents in greater detail.

In 1986, Amnesty International organised the “Conspiracy of Hope” concert tour with a range of artists assembled to raise funds for its human rights work. It was one of the largest human rights advocacy events during the 1980s. From the stage Bob Geldof and Steven van Zandt performed Bob Marley’s Redemption Song:

“Emancipate yourself from mental slavery
None but ourselves can free our minds.”

Marley borrowed those words directly from a Marcus Garvey speech. However, Garvey’s aims extended far beyond escaping mental slavery. Indeed those who gathered and drafted the Declaration in 1920 sought so much more. Their efforts merit a legitimate place in the much wider scholarship on international human rights as an intellectual achievement in its own right and as an expression of early 20th century global civil society human rights activism that speaks to some of the most profound political issues that the international community has had to face over the last century – issues that remain pervasive and persistent in their call for resolution today.

As #BlackLivesMatter protests take place amid widespread poverty, economic inequality and the disproportionate deadly impacts of Covid-19, Garvey’s words from a century ago call out:

“There is no race or nation in the world that can intimidate the present day Negro. We refuse to beg or cringe any longer; we demand our rightful place in the sun.”

The 1920 Declaration deserves to come into the light. DM/MC