Black-Owned Banks: “Anchors of a Community” 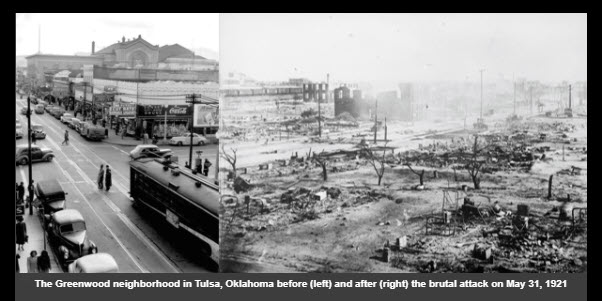 While the founding of African American-owned banks saw its hey-day in the late nineteenth and early twentieth centuries, and again from the early 1960s to 1990, only six African American-owned banks were founded between 1991 and 2019. This is what makes the recent founding of the digital Greenwood Bank so exciting, launched by rapper and activist, Michael Render, also known as Killer Mike, partnering with Atlanta Mayor and HistoryMaker Andrew Young and Ryan Glover, founder of Noontime Records.

Aimed at catering to the African American and Latinx communities, Greenwood Bank is named after the historic neighborhood in Tulsa, Oklahoma, formerly known as Black Wall Street, which was burned to the ground by a white mob in 1921. Poet and spoken word artist Abiodun Oyewole briefly explained: “Here's a town in Tulsa, Oklahoma that had over 657 businesses, 19 black millionaires in 1920, 1921… that town was… thriving… the largest hospital, the largest school, the largest church; the largest bank was all black people… But it was bombed… crop dusters… dropped two bombs on the town in 1921. Wiped the town out, killed over four hundred people, wiped out twelve thousand homes.”[1] Paying homage to this massacre, Killer Mike, Mayor Young, and Glover seek to “create a new financial platform that understands our history and our needs going forward, a banking platform built by us and for us, a platform that helps us build a stronger future for our communities.”[2]

These efforts, while certainly modernized, are not exactly new. African Americans have been starting their own banks as a direct response to white-owned banks’ discriminatory practices for over a century. Some of the earliest of these banks started with benevolent societies and the black fraternal order movement. Reverend William Washington Browne, who was previously enslaved in Georgia, founded the Grand United Order of True Reformers temperance organization in 1876. When interest in the group declined, the organization transformed into an insurance company, and by 1888, it became the first African American company to receive a bank charter. Named the True Reformers Savings Bank, Reverend Brown initially operated the bank out of his home in Richmond, Virginia. Between 1890 and 1925, 125 African American banks were founded, helping build wealth and entrepreneurship within their communities.

There was, however, a significant decrease in the number of African American banks established between 1929 and 1961. In this thirty-two year span, four were created, including Carver Federal Savings Bank in 1948 in New York City. One of the founders, William Hudgins (1907 - 2007), recalled how he was motivated to start the bank so that “Black folks [can] get a better deal. And they weren't getting a fair deal… I had to do a lot of educating people. For instance their credit, they had to protect that. You can't borrow money if you have a poor credit history and we taught that. Matter of fact we had classes on Thursday night. That was our policy--it wasn't just banking… People were invited to come and maybe have… a little refreshment and as a result people began to buy houses. White banks wouldn't loan them money to buy houses.”[3] Community leader and school physician Dr. Muriel Petioni (1914 - 2011), whose father was also a co-founder of Carver, pointed out: “Carver Federal Savings Bank… was the first black-owned bank in New York… is still the only surviving black bank in New York.”[4] The bank is now headed by Michael T. Pugh, who was named CEO in 2015, succeeding HistoryMaker Deborah C. Wright.

There was a second surge in the founding of African American-owned banks between 1962 and 1990, during which banks including Riverside National Bank, Freedom National Bank, and Seaway Bank, got their start. Right before this second wave, the founding president of Riverside National Bank Edward D. Irons, explained: “The people who were organizing banks were no smarter than anybody else. In fact, when I was at Harvard [Business School], I did a study of the educational level of people who work for banks, and only six percent of them had finished college. This was 1959… banking is a simple business… you get the deposit from the public, you invest those deposits and other income generating assets. You pay up, interest rate on time deposit, you didn't pay anything on demand deposit, and the expenses you take from the total operating function, and the balance is your profit… you don't need a Ph.D. to run a bank; you can run a bank with a high school education. You have to learn the rules… but once you learn the rules, it is not difficult, and I learned that, and so I went to [Houston,] Texas to organize a bank.”[5]

This bank, now named Unity National Bank, was founded in 1964, and, as Irons explained, “it was the first that had been given to black people in forty years in this country… I organized the directors… I went to the directors, one-on-one. And told them my vision, I said… ‘You ought to be a part of this, 'cause it's gonna be an important institution.’ And of course, I didn't have any money, and I borrowed twenty thousand dollars… when we opened the doors… people were standing outside the doors like we were giving away money. Because we built up such an exciting… environment… [and] it did what I had hoped to do: create a renaissance in the organization of black commercial banks in the nation. People begin to organize banks all over the country. I served as consultant to many of them.”[6] While it was the first African American-owned bank in Texas, it is now also the last, with Laurie Vignaud serving as its CEO.

One year after the establishment of Riverside, Freedom National Bank opened its doors in Harlem, New York. Beautician Rose Morgan (1912 - 2008), who also owned and operated the largest African American beauty salon in the nation beginning in 1942, explained the opening of this bank: “Eight of us got together. And we pooled our money and got the charter. And after we got the charter, we sold stock and raised more money… [the eight included] William Hudgins, Frank Schiffman that owned the Apollo Theater, Jack Blumstein that owned the Blumstein's Department Store, Sam Pierce was a lawyer… Jackie Robinson and Bruce Llewellyn… [and] Another woman that was a lawyer.”[7] William Hudgins pointed out, though, that “there were too many bad loans made with the bank,”[8] and it closed in 1990 with $101.9 million in assets, two branches in Brooklyn, 22,000 depositors, and 97 employees.[9]

Reverend Dr. Martin Luther King, Jr. making a deposit at Seaway Bank for his organization, the Southern Christian Leadership Conference, Chicago, 1965 The same year Freedom National Bank opened in Harlem, Seaway National Bank of Chicago was established. Entrepreneur Eugene H. Dibble, III (1929 - 2014) recalled acquiring the building for the bank: “The bank came up for sale, and I was out there one day and so I said, no, I wasn't interested in it. And then next day I was talking to somebody and they said that they might be… so I went back there and got a thirty day temporary agreement on the sale of the building. And I got some people involved in buying it, they went into it and opened the Seaway National Bank.”[10] Harvard Law School professor David B. Wilkins told of the founding, which included his father, Julian Wilkins: “A group of black business men and other leaders decided that it was time… for the black community to have its own bank. So there were very few banks on the South Side of Chicago or on the West Side of Chicago, and my father was one of a small group of black business and civic leaders who started Seaway National Bank.”[11]

Jacoby Dickens, Chairman, Seaway National Bank, c.1980s By the time entrepreneur Jacoby Dickens (1931 – 2013) became chairman of the bank in 1983, “the size of Seaway was maybe eighty seven million dollars. Today [1999] it is in excess of a quarter of a billion dollars in assets… We have a history of success and we fell in the high performing category for the last fifteen consecutive years. We're making money, we're providing a service to our community. We formed what we call a CDC [Community Development Corporation] whereby we buy… old boarded homes and rehab them… and put in low to moderate income families. We even give them the mortgage at a very good rate… people have to have financial services. And I'd like to think that we provide that and--back ten years ago [1980s] you had seven or eight financial institutions in this town [Chicago]. That has dwindled greatly.”[12]

Willard "Chuck" Lewis, founder of One Georgia Bank in Atlanta, explained why fewer black banks exist: “It really all boils down to asset quality and management. And management starts with the board of directors. I think some of the banks' boards were probably not as well equipped to adapt to a business model… a lot of the banks had the local religious community involved on the board, the academic community. And some had the business acumen and some might not have had the business acumen that it takes to properly oversee the bank and ensure that management is performing properly… from an asset quality standpoint, I think the loans that the banks made were reflective of their marketplace… the truth of the matter is a lot of the applicants that came to those banks came there as a last resort. They were typically turned down at some other bank, and then they would come there as a last resort instead of making those banks the primary option. So the support from… the strong borrowers probably wasn't there early enough to help 'em. And so you have a management issue and then you have poor credit quality, and then you end up losing your bank over it. So those are the things that typically happened. And that's not just in African American banks, but any bank, but it was particularly difficult for African American banks because the communities in which the banks tried to serve, they were economically depressed. So they really needed additional assistance outside of a pure banking model in order to make it viable.”[13] The decline continued, and the number of black-owned banks has decreased by over 50% since 2001. By August of 2019, it had furthered decreased from 48 to 22.

Greenwood Bank may be at the right place at the right time. Tens of thousands of customers signed up within the first 48 hours of the bank accepting applications, and over 100,000 applied within the first week. The bank will officially open for business in 2021, offering lower account-opening fees, online training in personal finance, car and small business loans, and home mortgages, with the hopes that its competition will encourage bigger banks to reach more communities of color.[14] This is extremely important because, as insurance executive Louis Dodd reminded, “banks in general are the anchors of a community… And these are anchors by which strong communities can and should be developed.”[15]

For more information on Greenwood Bank, visit their website: https://bankgreenwood.com/