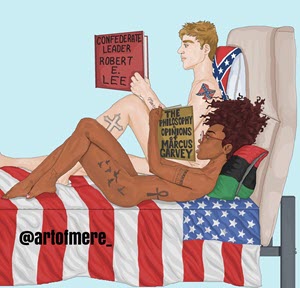 I think it’s important to clarify that the political genealogy of ‘Black Nativism’ extends far beyond Yvette Carnell, and Antonio Moore. While they are the most widely known proponents of, current day, Black nativist thought, their major contribution to its political lineage has been the creation of the #ADOS hashtag.

For those of us who have been following the political developments of this conservative strain of Black political thought, you will immediately recognize Dr. Claud Anderson as the father of 21st Century Black nativism. Over the years, there have been numerous Pan African scholars that have maintained a principled critique of the limitations of Dr. Anderson’s

Neither Yvette Carnell or Antonio Moore have presented any new findings, that haven’t already been discussed ad nauseam by Dr. Anderson. Where the two camps differ is in their solution to the problem. Dr. Claud Anderson advocates for group economics, and multiracial voter blocs, as a means to addressing the problem of Black Powerlessness.

These patterns are unchanging, and all signs point to an approaching market crash in the coming decade. The political formation of Yvette Carnell’s #ADOS is not an intelligent response to market forces, nor is it anchored in a deep historical knowledge of Black liberatory ideologies. It’s reactionary nature is evident, by the growing number of American Flags appended to social media bios to signal membership in the slave-identified American movement.

History has shown us that black people within the same country will be hostile to one another, to protect their individual economic interests. #ADOSTribalism is nothing more than hyper-individualism on a societal level, and a return to the politics of Black division.