Motion for Reconsideration of Dismissal Order

This Pleading Relates to:
Deadria Farmer-Paellmann, On behalf of herself and as representative of her enslaved ancestors and all other persons similarly situated, Plaintiff,v.Fleetboston Financial Corporation, Aetna Inc., Csx, and their predecessors, successors and/or assigns, and Corporate Does Nos. 1-100, Defendants. MDL-1491. Nos. 02 CV 7764 (CRN), 02 CV 7766 (CRN). United States District Court, N.D. Illinois, Eastern Division. July 20, 2005. 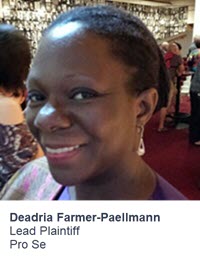 Deadria Farmer-Paellmann is a plaintiff in a Second Amended Consolidated Complaint filed on April 4, 2004, against defendant Aetna for slavery restitution stemming from injuries her enslaved ancestor Abel suffered from as a result of Aetna writing a slave life insurance policy on his life. Injuries he suffered from as a result of this practice include loss of property interest in himself and the fruit of his labor. Plaintiff also claims that she suffers from various continuous injuries as a result of Aetna's act against her ancestor Abel, including irreparable psychological damage from the loss of her African history, language and culture

Plaintiff included pendant state claims alleging recent consumer fraud by defendants FleetBoston and CSX. Plaintiff alleges that she lost money as a result of being misled by false communications defendants made to her and the public, starting in March of 2000, about their slavery business practices; and that they are unjustly enriched by money they gained from her, beginning in March of 2000, as a result of making the alleged misleading statements - in particular, public statements disassociating themselves from the practice of slavery.

Defendants moved to dismiss the case claiming, amongst other things that plaintiff's claims cannot be heard in a court in 2005.

The court granted the dismissal with prejudice, on July 6, 2005.

Plaintiff presents the court with this motion to reconsider the dismissal with prejudice.

The court has found that reconsideration is appropriate under FRCP 59(e) when “the Court has patently misunderstood a party, or has made a decision outside the adversarial issues presented to the Court by the parties, or has made an error not of reasoning but of apprehension,” or there has been a controlling or significant change in the facts since the submission of the issue to the court.

Facts Relevant to the Motion

The second basis for this motion is that(2) the court has made an error in apprehension when it states that no plaintiff in the action has a direct relationship to defendants in the action. Information supporting plaintiff's direct links to all defendants in her action is in the court's record.

In particular, the record shows that plaintiff Farmer-Paellmann claims that defendant Aetna wrote a life insurance policy on her ancestor Abel.

In addition, plaintiff claims that she was a customer of defendant FleetBoston and lost money due to misleading statements they made to her and the consuming public about their business. The complaint sets forth defendants' misleading claims.

Further, plaintiff Farmer-Paellmann claims that she is a customer of CSX as she uses Amtrak train service that runs on CSX owned rail lines. She claims that she lost money due to misleading statements CSX made to consumers about their business.

The third basis for this motion is (3) the court has made an error in apprehension when it states that plaintiffs “still fail to allege a specific, concrete harm or an ascertainable loss as a result of Defendants' alleged violations” of consumer fraud statutes. The record shows that Plaintiff does allege the specific loss of money as a result of Defendants FleetBoston and CSX alleged violations of consumer fraud statutes.

Plaintiff Alleges that Her Due Process Right Has Been Violated

The fourth basis for this motion is that (3)there has been a controlling and significant change in facts surrounding plaintiff's legal representation since the submission of her issues to the court.

In particular, the court relieved all of plaintiff's retained counsel from representing her since the filing of the First Amended Complaint, none of the remaining counselors recognize plaintiff as their client and do not advise her, and the court denied plaintiff's request to proceed pro se and to withdraw her case. Consequently, plaintiff has existed in the litigation since April of 2004, without any representation, pro se or otherwise.

Plaintiff holds that her Constitutionally protected Due Process rights have been violated. Courts have held that in order to state a claim based on a violation of the Due Process Clause, a plaintiff must allege three elements: (1) she was deprived of a life, liberty, or property interest; (2) state actors caused the deprivation and (3) the deprivation occurred without due process of law.

Plaintiff believes that the dismissal of her action with prejudice is, in large part, the result of the due process violation as existing counselors, who do not recognize her as their plaintiff, did not respond to her requests for consultation as highlighted in a court order, incomplete information was stated in her complaint, and then she was prohibited by the court to act on her own behalf to correct the problems or withdraw from the case.

Upon this discovery, Plaintiff forwarded missing facts to counsel to include in the Plaintiff's Response to Defendants' Joint Motion to Dismiss (Plaintiffs' Response), and forwarded an e-mail copy to the court, ex-parte.

Subsequently, lead counsel did include Plaintiffs links to defendants and her injuries in the footnotes of the said Plaintiff's Response.

However, the Court did not recognize the said missing facts in its Opinion and Order dismissing plaintiffs claim, even though the facts had become a part of the courts' record.

Plaintiff also asks that the court vacate its order dismissing her Second Amended Complaint, or in the alternative allow her dismissal to be “without prejudice”.

Plaintiffs Memorandum in Opposition to Defendants' Joint Motion to Dismiss, citing continuous injuries suffered by plaintiff including irreparable psychological damage resulting from Aetna's enslavement of her ancestor Abel, including the loss of her African ethnic and national identity (i.e. culture), at 1-2.

SCAC, stating that the court has supplemental jurisdiction over state consumer fraud claims. at 20.

Opinion and Order, July 6, 2005, MDL. 1491, Lead case 02-CV-7764 at 49, stating: “Further, plaintiffs cannot use their standing to pursue one type of claim in State court to establish their standing to pursue all of the claims asserted in the present case in federal court.” Here the court is erroneously concluding that plaintiffs are trying to use standing in State Unfair and Deceptive Trade Practice claims to satisfy standing in all other claims filed in the case..

The SCAC, states that “ Not only have defendants hidden their complicity in slavery for years, they continue to do so today. solely to promote their business interests in maintaining customer goodwill and in increasing their profits, defendants are engaging in continued intentional misrepresentations and deceptive statements to the consuming public about their roles in the enslavement of Africans.” at 51.

The SCAC cites, “CSX, based in Richmond Virginia says the allegations that its railroad lines were built with slave labor lack merit,” referring to a September 2002 article in the Dallas Morning News. at 53.

The SCAC, stating that the court has supplemental jurisdiction over various state claims of Consumer Fraud and Unfair and Deceptive Trade Practices. p.20.

The SCAC stating, “Plaintiffs seek consolidation of the following class and subclasses: ...All descendants of enslaved Africans who purchased product from defendant corporations who would not have done so had defendants accurately described their role in the transatlantic slave trade.”at 21.

Opinion and order, stating that: “Plaintiffs fail to allege any facts in their Complaint that directly link the specifically named Defendants to the alleged injuries suffered by Plaintiffs; nor does the Plaintiffs' complaint allege a direct connection between any of the named defendants and any of the Plaintiffs ancestors.” at 44,

Plaintiffs' Memorandum in Opposition to Defendants' Joint Motion to Dismiss. Footnote 2 sets forth that Aetna Inc.'s predecessor in interest wrote a life insurance policy on the life of Farmer-Paellmann's great-great-grandfather Abel who was enslaved in South Carolina, that plaintiff was a customer of defendant FleetBoston at the time when she was misled by the bank's statements to the consuming public disassociating itself from playing a role in slavery; and that she was a customer of CSX when it made misleading communications to the consuming public about their role in slavery. at 2-3.

Plaintiffs' Memorandum in Opposition to Defendants' Joint Motion to Dismiss , at 3.

Plaintiffs' Memorandum in Opposition to Defendants' Joint Motion to Dismiss, at 3.

Plaintiffs' Memorandum in Opposition to Defendants' Joint Motion to Dismiss, at 3. Plaintiff states that she was FleetBoston's student loan customer and she “lost money paid to them due to their said fraudulent statements in that she could have obtained similar loan servicing for less money (via loan consolidation, etc.) had she known the truth” about their role in slavery.

With respect to CSX, plaintiff states that she “lost money due to defendant's misleading statements in that she could have obtained similar transportation service for less money (i.e. bus, air flight, or local commuter train service) had she known the truth” about their role in slavery.

Plaintiff has sent requests to remaining counsel asking that they file the motion for reconsideration, and requesting clarification on whether they represent her. Two counselors have replied claiming that they do not represent her, and six counselors have failed to respond to her request and inquiry. Plaintiff has never had an attorney/client relationship with any of the counselors in this action other than those permitted to withdraw, and she does not know how they became a part of multidistrict litigation, much less how or why they might be considered her counsel by the court, if the court considers them her counsel.

Plaintiff suffered a reprimand from the court for this ex parte communication, however, she believed the communication was the only way to get counsel to include her links to defendants in the Plaintiff's Response to Defendants Joint Motion to Dismiss (Plaintiff's Response) - particularly in light of the fact that the Court's Deputy called Plaintiff and informed her that the Court was not going to rule on her Motion to Proceed Pro Se and Withdraw.