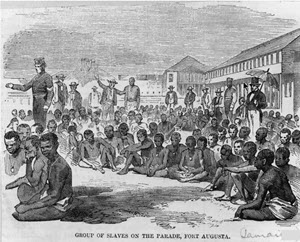 In 1865, slavery as an institution was abolished by the adoption of the 13th Amendment to the United States Constitution, declaring that "neither slavery nor involuntary servitude, except as punishment for crime whereof the party shall have been duly convicted, shall exist within the United States or any place subject to their jurisdiction."

This provision is self-executing and by its unaided force forbids not only African slavery but all other kinds of slavery as well. The term "involuntary servitude" under the 13th Amendment is not limited to chattel slavery-like conditions; it is intended to cover those forms of compulsory labor akin to African slavery which in practical operation would tend to produce like undesirable results. It is a denunciation of a condition and not a declaration in favor of a particular people; it reaches every race and every individual. Thus, the 13th Amendment protects all races, not just those that had been subject to slavery in the United States. The Amendment applies to Indian tribes. However, it only applies to persons or human beings. Unlike the 14th Amendment, it is not addressed solely to state action so that the amendment's prohibition of the practice of slavery is enforceable against private parties in the absence of state action. Any statute that is contrary to its terms is void.

The 13th Amendment is not a mere prohibition of state laws establishing or upholding slavery but is an absolute declaration that slavery or involuntary servitude shall not exist in any part of the United States. The primary purpose for outlawing involuntary servitude was to abolish all practices where subjection having some of the incidence of slavery was legally enforced, either directly, by a state's using its power to return the servant to the master, or indirectly, by subjecting persons who left the employer's service to criminal penalties.

If Congress rationally determines that something is a badge or incident of slavery, it may broadly legislate against it through section 2 of the 13th Amendment, which states that Congress has the power to enforce the article through appropriate legislation. Thus, the provision of the Hate Crimes Act, which prohibits racially motivated hate crimes resulting in death or in an attempt to kill, is a constitutional exercise of congressional authority under the 13th Amendment.