The Treaty of Guadalupe Hidalgo, the US War Against Mexico, and Racism (Searchable Database) 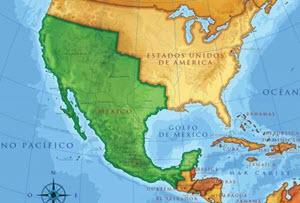 This searchable database includes  100+ law review articles on  Mexican Americans and the Treaty of Guadalupe Hidalgo. The United States had a war of aggression against a weaker neighbor. The Treaty of Guadalupe was supposed to protect the land and culture of Mexicans in the newly acquired American Territory. It was broken many times Documents were gathered through an electronic database search using the following search terms: "Guadalupe Hidalgo" [in the same sentence with] (racist or racism or racial or race.

"In 1947, Harry Truman, a Democrat, came to Mexico to reaffirm what a Republican president, Abraham Lincoln, had affirmed throughout his career: the Mexican people are not only our neighbors but the entire southwestern US was formerly their territory. Americans were the first illegal immigrants to their country, violating Mexico laws, fomenting revolt, and later with its army violating Mexico's sovereign territory."  Excerpted from: Truman and Lincoln and Mexico (Last Visited: January 14, 2022) .