Race Obliviousness and the Invisibility of Whiteness: The Court's Construction of Race (1995) 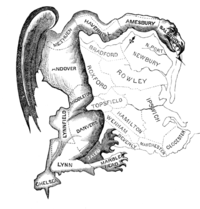 Congress passed the Voting Rights Act of 1965 in response to the long history of racial discrimination in voting rights in the United States. Section five of the Act requires certain states with a history of voting discrimination to obtain pre-clearance for any changes in voting practices from the United States Attorney General or from a three-judge panel of the United States District Court for the District of Columbia. The pre-clearance mechanism requires that a proposed change have neither the purpose nor the effect of “denying or abridging the right to vote on account of race or color.” Among the changes which require pre-clearance are congressional redistricting plans.

The Georgia General Assembly undertook a redrawing of the state's congressional districts following the 1990 Decennial Census, which indicated that Georgia's increased population entitled it to an additional congressional seat. The Georgia General Assembly submitted its redistricting plan to the United States Attorney General for pre-clearance on October 1, 1991. The assembly's redistricting plan included two majority-minority congressional districts, the fifth and eleventh, and one district that was thirty-five percent Black, the second district. The Department of Justice refused pre-clearance on January 21, 1992, because the plan created only two majority-minority districts and because the plan failed to recognize certain minority populations.

The Georgia General Assembly redrew the districts and submitted a second plan. In its second attempt to create the new district, Georgia refused to adopt a plan drafted by the American Civil Liberties Union (“ACLU”). The ACLU plan proposed three majority-minority districts. The plan Georgia eventually submitted increased the Black populations of the second, fifth, and eleventh districts, but still included only two majority-minority districts. The Department of Justice rejected Georgia's second plan, concluding that Georgia had failed to explain adequately why it had not adopted a third majority-minority district. The Georgia General Assembly then drafted a third redistricting plan based on the ACLU plan. The Department of Justice cleared this plan on April 2, 1992.

Black candidates from all three majority-minority districts were elected to Congress in the November 4, 1992, elections. On January 13, 1994, five White voters (the “Voters”) from the eleventh district filed suit against various state officials in the United States District Court for the Southern District of Georgia. The Voters alleged that the redrawing of the eleventh district constituted a racial gerrymander in violation of the Equal Protection Clause of the Fourteenth Amendment as interpreted in Shaw v. Reno. Pursuant to 28 U.S.C. s 2284, a three-judge panel convened to adjudicate the Voters' allegations. The United States and numerous Georgia residents intervened on behalf of the defendant-state officials.

The district court panel, in a two-to-one decision, held the eleventh district invalid under Shaw. The court found that race was the overriding and predominant force in the districting determination, relying on the eleventh district's irregular shape and the Georgia General Assembly's stated purpose and intent in creating the third majority-minority district. Applying strict scrutiny to the districting plan, the court assumed that compliance with the Voting Rights Act would be a compelling governmental interest. However, the court found that the redistricting plan was not narrowly tailored to comply with the Act, because the Act did not require three majority-Black districts.

On appeal in Miller v. Johnson, the United States Supreme Court held that the congressional redistricting plan drawn by the Georgia General Assembly violated the Fourteenth Amendment's Equal Protection Clause. In so doing, the Court adopted a new “race-as-predominant-factor” standard for reviewing reapportionment legislation. Under this standard, federal courts must strictly scrutinize any districting predominantly motivated by race. The Court's standard requires strict scrutiny not only when the state legislature abandons traditional districting practices, but also when traditional districting practices have been subordinated to race.

The Court improperly held that race may not play a predominant role in the creation of congressional districts. The Court's decision ultimately relied on a social construction of race which is not legally required, contradicts the principles of the Voting Rights Act, and ignores the experiences of many Black Americans. The construction of race which the Court adopted reflects the “race obliviousness” of those with race privilege and race power. Thus, the Court's decision, rather than promoting the goals of racial justice and equality, actually entrenched a construction of race that is particularly detrimental to those goals. Finally, in order to justify its race-oblivious perspective, the Court appropriated the rhetoric and moral authority of Black Americans and their allies who have struggled for racial justice in this country.

In Miller v. Johnson, the United States Supreme Court held that the congressional redistricting plan drawn by the Georgia General Assembly violated the Fourteenth Amendment's Equal Protection Clause. The Court adopted a new “race-as-predominant-factor” standard in evaluating congressional districting legislation. Under this standard, courts must strictly scrutinize congressional reapportionment plans which are predominantly motivated by race, and in which traditional districting principles are subordinated to racial considerations. In adopting this standard, the Court made clear that courts must utilize strict scrutiny when reviewing race-conscious governmental decision-making in the context of congressional reapportionment.

Ultimately, it was not a legal analysis which drove the Court's decision in Miller, but the Court's adoption of a particular social construction of race which views race as an insignificant feature of identity, entirely discrete from other features of identity, such as social, economic, and ethnic interests. Such a construction of race reflects a “race obliviousness” which is typical of those with race privilege and, correspondingly, race power. The erasure of race, the invisibility of whiteness, makes a great deal of sense to those whose race privileges them in the social, political, and economic realms. However, this construction of race is at odds with the experience of many Black Americans for whom race and ethnicity share a complicated and inextricable relationship.

One's political, social, and philosophical perspectives influence, if not determine, how one views race. However, such a view has no legal foundation. Thus, because the Court in Miller grounded its decision on its construction of race, the Court relied not on legal reasoning in adopting that construction, but rather on rhetoric and moral persuasion. Specifically, the Court appropriated the rhetoric and moral authority of the struggles of Black Americans for racial justice. The Court used strong language such as “segregation” and “political apartheid” and made broad appeals to the ideals of the Fourteenth Amendment to give the decision force. These strategies take the rhetoric and moral authority of Black Americans' struggles for justice and turn them on their heads. In Miller, the Court declares that one of the most serious threats to racial justice is acknowledging that race matters, and in so doing, the Court perpetuates the problems of racism in America.