Overcoming Gerrymandering: Analyzing past Approaches and Looking to Automation to Overcome Bias and Cognitive Limitations in Florida 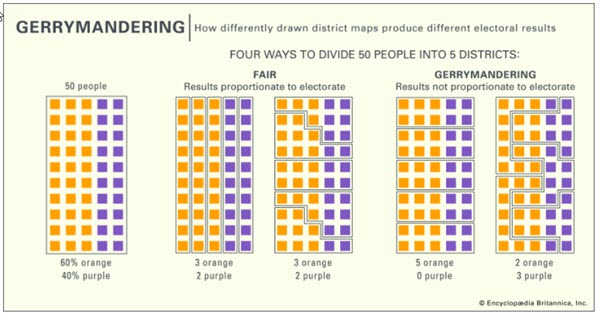 One of the most defining aspects of American democracy is the notion that the will of the people is fairly characterized by those who are elected to represent them. As Alexander Hamilton once remarked during the ratification of the United States Constitution, “the true principle of a republic is, that the people should choose whom they please to govern them.” This ideology was subsequently incorporated into portions of the Constitution concerning congressional redistricting, the process of redrawing the district boundaries from which members of the United States House of Representatives are elected. Under Article I, Section II, the United States population must be recorded every ten years, and based upon this census, seats in the House of Representatives are to be reapportioned with each state retaining at least one seat. However, redistricting doesn't just occur in states that have gained or lost a seat in the House of Representatives. As this Article will later discuss, the Supreme Court interpreted Article I to require the districts in each state have roughly equal populations. Thus, most states redraw their district boundaries following each new census to account for shifts in population throughout the state.

However, in recent years, a process that was intended to ensure equal representation among shifting populations has instead resulted in a battle among those in power to reduce competition in elections and further the aims of their respective political party by manipulating the district lines. A report by the Center for American Progress found that during the 2012, 2014, and 2016 elections, an average of fifty-nine seats in the House of Representatives shifted as a result of unfairly drawn district lines. In other words, distorted district lines caused fifty-nine politicians, who would not have otherwise been chosen based on “statewide voter support for their party,” to be elected every other November during this period. Additionally, a 2012 analysis by the Brennan Center for Justice reports that in the seventeen states where Republicans redrew district maps for the 2010 redistricting cycle, their candidates won about fifty-three percent of the vote but retained seventy-two percent of the seats. Similarly, in the six states where Democrats drew the lines, their candidates won about fifty-six percent of the vote but retained seventy-one percent of the seats. For the remaining twenty-seven states, redistricting power was shared between the parties; there was only one congressional district in the state; or the lines were drawn by an appointed commission or court.

The process that yields such skewed outcomes is known as gerrymandering. However, the “harm of gerrymandering is ... more than seat shares that are out of whack with vote shares. It is the ideological skewing of representation--and, with it, the policies that shape people's lives.” This harm reached Florida following the 2010 census when the Florida Supreme Court determined that district lines used during the 2014 election cycle were distorted for political gain and ordered eight districts to be redrawn within months of the 2016 election. In 2021, the United States Census Bureau will release data from the 2020 Census for reapportionment. After this release, Florida is expected to gain two additional seats in the House of Representatives, which will be incorporated into the new maps drawn for the current decade. For many, a repeat of the 2010 theatrics is a looming concern as the 2022 redistricting process nears.

Although political gerrymandering has existed throughout most of United States history and many experts have sought to prevent it, recent technological advancements have increased the accuracy and frequency through which it has been employed. In looking to solve this problem, some states have attempted to limit conflict by appointing independent commissions to perform their redistricting, while others have tasked the courts with this duty. Additional proposed solutions place strict guidelines on how redistricting should be conducted, such as requiring contiguity, or maximizing compactness, competitiveness, or proportionality. Others, however, note that when recent technological developments are considered, redistricting may be most successful when left devoid of human manipulation; they advocate instead for automated redistricting through the use of computer algorithms.

This Article will argue that Florida should adopt the use of computer algorithms in its redistricting process. Part II will discuss the origins of gerrymandering, the methods through which it is achieved, and the actions taken by the Supreme Court and legislature to limit its effect. Part III will discuss the role gerrymandering played in the redistricting process in Florida following the 2010 census and how similar results might be prevented under a new management system.

Part IV will address the different solutions states have implemented to combat gerrymandering, including those which have received strong support, highlighting both the benefits and drawbacks of each. This section will distinguish between three categories of solutions: (1) those which focus on who should draw the lines (legislatures, independent commissions, advisory commissions, or computer modeling programs); (2) those that advocate for an overarching philosophy behind the line-drawing (communities of interest, competitiveness, compactness, electoral outcomes, or contiguity); and (3) those that attempt to redefine the redistricting process as a whole (true proportional representation).

From there, Part V will further analyze the impact of implementing an automated redistricting program maximizing compactness in Florida and its ability to produce more universally accepted districts while freeing up litigation in the state court system. As part of this analysis, Part V will compare this solution to those discussed in Part IV and examine other possible specializations such a program could seek to maximize (competitiveness, electoral outcomes, contiguity). Part VI will evaluate the hurdles in implementing such a program, the probability of its enactment in Florida, and the role advisory commissions could play in its management.

The goal of redistricting should be to ensure fair and equal representation. However, in Florida and many states across the United States, current redistricting plans are subject to the cognitive limitations of human mapmakers and often produce districts that unfairly favor a political party, incumbent, or group of voters. By contrast, automated districting maximizing compactness would amplify technological resources, generate a more transparent discussion regarding redistricting goals, and ultimately produce districts that provide voters with a more meaningful choice when selecting a representative rather than permitting representatives to barter voters for political gain.

Candidate for Juris Doctor, Stetson University College of Law, 2022; B.S. in Entrepreneurship, The University of Tampa, 2018.