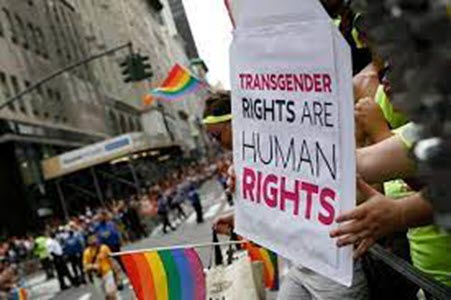 2020 was a monumental year for the transgender rights movement, which presents unique legal issues within the broader struggle for LGBTQ+ equality. While trans individuals continue to face disproportionate discrimination and violence, in Bostock v. Clayton County, the Supreme Court monumentally held that Title VII explicitly protects trans employees. Furthermore, high-profile trans individuals, such as Sarah McBride, who recently became the United States' first trans state senator, are bringing heightened visibility and support to the struggle for transgender rights and social acceptance. In recent years, trans individuals have competed in the U.S. Open, graced the cover of TIME and Vanity Fair, presided over courtrooms as judges, and served with distinction in the military. The struggle for trans equality has also been fought on the political and legal fronts. The first transgender lobbying day took place in 1995 in Washington, D.C. Thirteen years later, the first transgender mayor of a U.S city, Stu Rasmussen, was elected. The following year, President Barack Obama nominated the first openly transgender federal appointees to serve in his administration, later hiring the White House's first openly transgender staff member. In 2021, newly elected President Joe Biden nominated Rachel Levine to serve as the Assistant Secretary of Health. Levine will be the first openly transgender federal official confirmed by the U.S. Senate.

While trans visibility in popular culture and media is increasing, and efforts are being made to center trans people in social movements, such as #BlackLivesMatter, trans people are still subject to stigma, discrimination, and violence at disproportionate levels. Federal Bureau of Investigation data shows that incidents of hate crimes motivated by gender identity rose from 33 in 2013 to 118 in 2015 and have remained in the triple-digits in the years since. Lack of uniform documentation procedures, failure to properly identify and distinguish gender identity from sexual orientation, and questionable reporting rates cast doubts on the accuracy of current data, suggesting that hate crimes motivated by gender identity are more common than statistics indicate.

This Article uses the terms “transgender” or “trans” to refer to a person whose gender identity is different from the sex assigned to them at birth. Gender identity is distinct from sexual orientation. Gender identity refers “to each person's deeply felt internal and individual experience of gender--which may or may not correspond with the sex assigned at birth-- including the personal sense of the body and other expressions of gender” such as dress, speech, and mannerisms. Sexual orientation, meanwhile, refers to an individual's emotional, affectional, and sexual attraction to individuals of a different gender, the same gender, or any gender.

On both the state and federal level, trans people lack the legal protections needed to lead healthy, safe, and dignified lives. This Article addresses the current state of legal protections for transgender people. Part II describes workplace discrimination protections based on gender identity at the state and federal level. Part III covers access to gender-affirming healthcare, including challenges with insurance and discrimination when accessing care such as hormone replacement therapy (HRT) under the Affordable Care Act and its state-level companions. Part IV provides an overview of violence against transgender individuals by various actors and discusses legislative efforts to address disparities across intersectional lines. Part V summarizes challenges facing, and protections for, transgender people in accessing public accommodations and housing. Part VI emphasizes the importance of obtaining identity documents that reflect one's gender identity, and it discusses the varied difficulty with which trans people can obtain or change those documents on the federal and state levels.

The movement for transgender equality has grown over time, with increased media visibility and social understanding surrounding the challenges and hardships unique to the transgender community. Recent legislation such as Georgia's new hate crime law, which imposes additional penalties on defendants who commit crimes motivated by the victim's sexual orientation or gender (among other protected categories), demonstrate the legal and political advancements being achieved by the LGBTQ+ community. Similarly, in holding that transgender employees are protected by Title VII in the monumental Bostock v. Clayton County decision, the Supreme Court affirmatively provided support for the transgender community at the federal level. On the other hand, transgender people still suffer disproportionately from stigma, discrimination, and violence compared to cisgender people. Despite an increase in social acceptance, data from the Federal Bureau of Investigation demonstrates that there are still consistently more than one hundred instances of hate crimes motivated by the victim's gender identity each year in the United States, and in all likelihood this actually underestimates the true rate of violence against transgender people. Thus, while the transgender rights movement is clearly making strides in its pursuit for equality, it is equally obvious that there is still more work to be done to ensure that transgender people across the country are able to live their lives safely, happily, and with the respect they deserve.