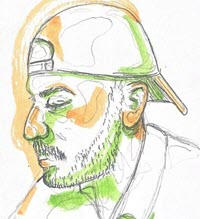 Summertime in Egypt is hot and dry. Its capital is Cairo--one hundred miles south of the Mediterranean and seventy-five miles west of the Gulf of Suez. To the west: over five-thousand miles of desert. Thermometers touch 104 in the summertime. Locals seek shade, and travelers seek other destinations. Yet in the summer of 1964, Malcom X knelt in the heat, reflecting on his recent months.

In March, he met the Rev. Dr. Martin Luther King, Jr. in Washington, D.C. By April, he was in Saudi Arabia beginning his hajj. He had toured the whole of Africa by August. At summer's peak he was in Egypt, professing his change of heart in local papers. “I no longer subscribe to sweeping indictments of any one race,” he wrote. Racism was a ghost, invisible to the eye but illuminated by the mind. His mind, for decades, was guided by the ideals of the Nation of Islam. When he severed from the Nation, creating room for new ideas, the ghost changed form before his eyes. What had he really been fighting all those years?

Nearly sixty years later, racism is still a ghost. In the United States, courts struggle to define and regulate racist behavior. The result is the feeling of a bifurcated universe: On one side, racialized socioeconomic inequality is racism; on the other, that inequality is not racism without clear racial animus. International courts similarly struggle to catch the ghost; after World War II, global negotiations over United Nations (UN) treaties on racism stalled when Saudi and Israeli diplomats disagreed on whether antisemitism was racism or religious persecution. In either case, the issue is that a person's vision of racism is informed by the ideas animating their mind at that time.

Scholars have recently reframed racism with great effect. Under modern frameworks, racism is best understood as describing the character, rather than the motivation, of an object or action. A racist is a person whose actions produce racial inequality. Comparatively, an artist is a person whose actions produce a lot of art--even if the person has never intended to make art. The word racism can certainly describe a state of mind, but properly used, it always describes a state of being--racism is a condition, not an objective.

Part I defines racism and antiracism, then discusses how racist and antiracist ideas are realized through government power. Next, this Essay visits one of the most prominent moments of judicial racial history: the story of Dred Scott.

Part II walks through the procedural history of the entire legal battle using the antiracist lexicon. In so doing, this Essay shows how racist and antiracist ideas are realized with judicial power.

Part III proceeds to the seminal case, Dred Scott v. Sandford. Therein, the Essay continues to describe judicial conduct in racist/antiracist terms, and it further emphasizes the different qualities of judicial actors: lawyers, parties, and judges. Throughout, the reader observes courts as judicial institutions whose conduct can take on racist or antiracist character. In conclusion, this Essay exhales with thoughts of racism's shifting nature. I encourage future advocates of equality to give less faith to the U.S. judicial system as a reliable vehicle for empowering antiracist ideas. Instead, nontraditional paths must be considered.

After the Supreme Court decided their case, the Scotts were eventually freed for good. Recall how Irene Emerson left and married an abolitionist in Massachusetts? He took issue with the fact that his brother-in-law, John Sanford, just won the most prominent proslavery judicial opinion in American history. He moved to have the Scotts freed, and they were. Nonetheless, racism was given so much power in that case that freeing the Scotts would do nothing to prevent the damage: Dred Scott v. Sandford arguably caused the Civil War.

The history of judicial racism and antiracism does not end with Dred Scott. Judicial history is a history of racism and antiracism, and judicial history continues to this day. As such, scholars now have over two hundred years of judicial conduct to scrutinize. Consider also that Justice Sotomayor has implied the Supreme Court is bending to political whims. One does not have to look too deep into the context of her claim to see its potential truth: Within the past decade, the Supreme Court has stripped parts of the Voting Rights Act and upheld partisan gerrymandering.

Over the few months this Essay was under review, the Supreme Court weakened immigration protection for the children of undocumented immigrants, and it granted an emergency stay to pause census collection one month before a Presidential election. The Court just moved--overnight--to block Wisconsin's decision to expand absentee voting in the middle of a global pandemic. It may hear cases on the constitutionality of race-conscious affirmative action. Now, as in the nineteenth century, the Supreme Court remains an institution of government whose conduct defines liberty, equality, and freedom as enforced by the United States. The present and three recent presidential administrations have been scrutinized for dramatically expanding the scope of executive power, possibly influencing the Court to support that expansion. The U.S. House of Representatives, fortunately, has experienced resurgences of progressive ideologies, especially those related to racial equality. Nonetheless, the fact remains that the Supreme Court is one of three sources of government power, none of which have a distinctly antiracist character.

Moving forward, antiracist advocates should be organized in terms of that racist institutional structure. It follows that judicial antiracists must be cognizant of the judicial branch's amenability to antiracism. Further, judicial antiracists should adopt the modern definitions of racism and antiracism so that they can more clearly discern racist and antiracist conduct. A fantastic example is the Create a Respectful and Open World for Natural Hair (CROWN) Act, which advances the antiracist idea that Black peoples' hair is no more or less socially acceptable than the hair of their fairer neighbors. This Act covers not only open and clear racism--hey, no black hair allowed because black hair is unkempt--but also hey, no dreads because dreads are unprofessional. Such antiracist law is forward-looking because it addresses racism as a measure of conduct, rather than just a measure of intent.

Conversely today's federal common law standard for illegal racism revolves around the “narrow purposeful discrimination rule.” That rule makes racism judicially cognizable only where a court can see the purpose of the conduct as racist. An example is Memphis v. Greene, wherein a court reasoned that no illegal racism existed when a city organized the private sale of a street to prevent Black pedestrians from walking through a white neighborhood. Similarly, the Supreme Court held that racism was no judiciable issue in recent cases of gerrymandering. Majority Democrat neighborhoods had their votes diluted by 10-2 Republican-Democrat district structures; a similar fate was suffered by tens of thousands of Wisconsinites who were told to go to crowded polling sites in a viral pandemic if they wanted to vote. On their surface, issues like these do not portend racial animus, even though their racial effect is a statistical certainty. As such, the judicial system has become a poor vehicle to advance antiracist ideas, a shift from the judicial antiracism of the Civil Rights Revolution.

But it follows that if antiracist advocacy via government channels is moot, then traditional civil rights litigation is moot even where it seems to work. I agree with Brother Malcom's suggestion that racism is a human rights issue that should be adjudicated with international law; but the U.S. Constitution applies to my neighbors and I, so I also respect racism as a civil rights issue that is resolved with constitutional law. International law might be advantageous terrain, though, like grassroots organizers, international advocates are not necessarily seeking answers or permission from U.S. institutions. Dred Scott had no other option--the Supreme Court was his Hail Mary. Today, victims of racism and other forms of oppression benefit from a much more connected world. Judicial history does not have to continue the way that it has--we can support innovation, and we can support a new era of judicial antiracism. By accomplishing that goal, we advance human equality.

DeVaughn Jones is completing his final year at the American University, Washington College of Law.