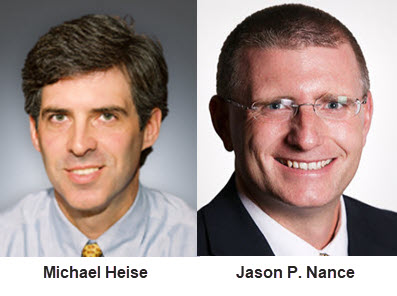 While it is not clear at this juncture which lasting legal and policy changes may emerge from recent and ongoing efforts to “Defund the Police,” attributable to the resurgent Black Lives Matters movement, one specific change is already clear: a growing number of public school districts are now confronting related demands to “defund” school resource officer (“SRO/police”) programs that operate in one-half of the nation's public elementary and secondary schools. Despite a sustained growth in SRO/police presence in public elementary and secondary schools over time, much remains unknown about the full suite of costs and benefits for students, schools, and families attributable to these programs. What remains all but assumed amid this uncertainty, however, is that a school's SRO/police presence helps fuel a “school-to-prison pipeline.”

The growing school-to-prison pipeline research literature features two general claims that frame key debates about how public schools approach student discipline. One claim is that schools' student discipline practices have become increasingly legalized. A steadily increasing SRO/police presence in the nation's public schools both contributes to, and reflects, this trend. Aside from an array of factors that help account for an increased SRO/police presence in public schools, schools' evolving posture towards student discipline raises important policy concerns. An increasingly legalized school environment may contribute to a net increase in overall school safety and a concurrent decrease in school violence. Even if such benefits are realized, important potential costs also lurk. Absent a truly randomized and controlled experiment, efforts to assess and weigh the benefits and costs associated with schools' increasingly legalized approach toward student discipline impose significant demands on potential research designs.

Notwithstanding important research design challenges, much of the public and scholarly attention to schools' evolving posture toward student discipline dwells on the possible negative spill-over effects imposed on students, their families, and schools. One potential cost that has attracted particular scholarly (and public) attention involves students' increased exposure to the criminal justice system. Given the important stakes involved, concerns about adverse implications for individual students and their futures attributable to an increasingly legalized student discipline model are important and warrant careful attention. This is especially so if schools' motivations for this policy shift include a desire to functionally out-source a greater share of responsibility for student discipline to law enforcement agencies. Making matters worse is that referrals of student incidents to law enforcement agencies--particularly for lower-level non-violent student incidents that were traditionally handled internally within schools--often set into motion a series of legal events that can culminate in ways that deleteriously impact students' lives. Operationalizing this first general claim--that schools' approach to student discipline is becoming increasingly legalized--contributes to the following hypothesis: SRO/police presence (no matter how small or large) at a school corresponds with an increase in the likelihood that the school will report student discipline incidents to law enforcement agencies. A related, though distinct, form of this hypothesis is that as a school's SRO/police presence increases so too does the likelihood that the school will report student discipline incidents to law enforcement agencies.

Despite both claims having already secured general acceptance in the school-to-prison pipeline literature, we find mixed empirical support when these two claims are subjected to the nation's leading cross-sectional data set on public school crime and safety, the U.S. Department of Education's 2015-2016 School Survey on Crime and Safety (“SSOCS”). With respect to the first claim, we find evidence that a school's SRO/police presence corresponds with an increased likelihood that the school will report student incidents to law enforcement agencies. Our finding on this first claim generally comports with prior studies that analyze earlier versions of the SSOCS data set.

At the same time, however, we do not find direct empirical support for the second claim: that school reports of student incidents to law enforcement agencies systematically distribute unevenly across various student subgroups. Direct evidence on this specific claim is simply not possible owing to the absence in the SSOCS data set of any individual-level demographic data (e.g., race/ethnicity, gender, socio-economic status) on students whose conduct triggered a school referral to law enforcement agencies. To be clear, however, this hypothesis remains a viable possibility as supportive anecdotal and related evidence exists.

Our narrower point is that there is no direct empirical support from the SSOCS data set that school referrals to law enforcement raise troubling distributional issues. Moreover, the weight of the indirect evidence from school-level data similarly does not imply troubling distributional outcomes. Notably, the paucity of supportive empirical evidence from our study generally contrasts with broader scholarly and public claims about uneven distributions of school discipline across various student sub-groups.

Our study of the relation between a school's SRO/police presence and the school's likelihood of referring student disciplinary incidents to law enforcement agencies seeks to contribute to the existing research literature in three specific ways. First, our analyses exploit a more recent (2015-16) version of the SSOCS data set. Second, our various models include such complementary data on state-level mandatory reporting requirements as well as district-level per pupil spending information. These complimentary data provide helpful, and perhaps essential, controls for any modeling efforts. Third, we explore three distinct analytic approaches, including logistic regression, fractional response regression, and Heckman selection specifications in an effort to better isolate the possible independent influence of a school's SRO/police presence along with the magnitude of that presence on a school's student discipline reporting behavior.

This Article proceeds as follows. Part I briefly summarizes the relevant research literatures. Part II describes our data and empirical strategy. We present our results in Part III and consider their legal and policy implications. We conclude in Part IV and discuss possible next steps for subsequent research.

When we submit two persistent and key school-to-prison pipeline claims to more recent SSOCS data and more granular empirical testing, what emerges, on balance, is persistent support for one claim and a notable deficit of direct support for the other. When it comes to either whether a school reports any student disciplinary incidents to law enforcement agencies or a school's rate of reporting, we find consistent and robust evidence--and across virtually all of our models--that a school's SRO/police presence exerts upward influence on schools' inclination to report and rate of reporting. While we did not undertake a precise or literal “replication” of prior studies, our core findings on these points generally comport with prior research on earlier SSOCS data sets.

A second core school-to-prison pipeline hypothesis dwells on distributional claims. Specifically, many critics of an increasingly “legalized” approach to student discipline in schools argue that increases in school reporting, flowing from increases in schools' SRO/police presence, disproportionately involve students of color, boys, students from low-income households, and other vulnerable student sub-groups. As we noted previously, direct evidence on this specific claim from the SSOCS data set is simply not possible owing to the absence of any individual-level demographic data (e.g., race/ethnicity, gender, socio-economic status) on the students whose conduct triggered a possible school referral to law enforcement agencies.

Despite the absence of more helpful student-level demographic data, our school-level findings do not hint at any obvious distributional concerns. Virtually all of the (few) instances where any of the traditional “distributional-concerning” variables achieved statistical significance involve gender. And, somewhat surprisingly, our results imply that a decrease in a school's percentage of male students corresponds with an increase in school reporting rates. While our distributional-related findings generally comport with past empirical research using earlier SSOCS data sets, our findings remain somewhat at odds with received popular wisdom.

Going forward, future research on these and other, related school-to-prison pipeline claims would benefit from improved individual-level data, especially as it relates to the individual students whose conduct triggered a possible school referral to law enforcement agencies. Another current data deficit relates to information on the criminal justice outcomes for those students whose conduct triggered a school referral to law enforcement agencies. While it is certainly plausible to assert that any adverse interaction between a student and a law enforcement agency is, on balance, negative, more granular data on the formal legal dispositions of these interactions would provide helpful information for a broader sweep of related research questions.

We close by emphasizing the complexity of this issue, the increasingly charged area of student discipline, and the growing demands from parents, students, and school administrators for greater school security and order. The nuanced, complex, and varied interactions with a school's SRO/police presence, and whether such a presence's net costs exceed its benefits, is not obvious and likely varies across school districts and, perhaps, schools. While such decisions will inevitably involve some degree of political calculation, surrendering these decisions to an unusually politicized environment--and with total disregard for available data--invites self-defeat. Indeed, it is precisely moments like these, where political emotions appear especially raw and enflamed, when a good-faith commitment to “following data” is at a premium.

Michael Heise is the William G. McRoberts Professor in the Empirical Study of Law at Cornell Law School. Author correspondence: This email address is being protected from spambots. You need JavaScript enabled to view it..

Jason P. Nance is a Professor at the University of Florida Levin College of Law.