Consequences of Police in Schools: The Criminalization of Children in an Era of Mass Incarceration

Excerpted From: Katherine Elizabeth Holloway, Consequences of Police in Schools: The Criminalization of Children in an Era of Mass Incarceration, 19 Hastings Race and Poverty Law Journal 3 (Winter 2021) (273 Footnotes) (Full Document) 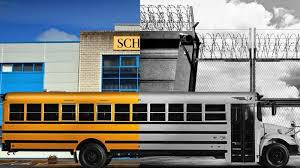 The presence of police in schools has become quite common since the first police officer was placed in Flint, Michigan's Bryant Community Junior High School in 1958. Between 2017 and 2018, 51 percent of U.S. public schools were visited by sworn police officers, including 71 percent of middle schools and 76 percent of high schools. In some jurisdictions like Florida, Maryland, North Carolina, South Carolina, Tennessee, and Virginia, 90 percent of high school students report they attended a school that has police presence.

Proponents of police officers on school campuses state that officers make schools safer, and especially protects against active shooting events. However, data suggests that police on school campuses do not actually make schools safer, nor are they effective at intervening in school shootings. In fact, data suggests that the placement of police in schools increases disorder and school crime, increases exclusionary disciplinary practices, increases dropout rates, and decreases college enrollment. Data also reflects horrific disparate treatment of students of color, particularly Black students, and students with disabilities, from disciplinary events, referrals to law enforcement and arrests, to physical abuses.

This article proposes the presence of police in schools is not effective at promoting safety, but is in fact a major player in the school-to-prison pipeline phenomenon experienced across the U.S. This article challenges the practice of placing police in schools and calls into question the legitimacy of school police when evaluating the practice's historical roots in the “tough of crime” era and the age of the “superpredator myth.” This article draws comparisons and relationships between events that catapulted the U.S. into an era of mass incarceration, and those that led to a pipelining of students from schools into juvenile detention. This article further proposes that students are not adequately protected from police in schools by our courts, and with the absence of adequate standards that prevent disparities in discipline and education, police should be removed from schools completely.

In support of these arguments, Part II of this article provides a recapitulation of the development of police presence in schools and highlights relevant historical eras of corresponding discrimination. Part III provides an assessment of the contemporary school-based police program, (1) how police presence in schools works in theory, (2) how police presence affect schools in practice, (3) the effects of police in schools on safety, discipline, and the criminalization of children, and (4) the effect school police have on communities. Part IV provides a brief assessment of where the law falls short of protecting students from dangerous encounters with school-based police. And finally, Part V concludes that, absent accountability for officers, and in light of the risks police pose for children, police should be removed from schools, and schools should sever their relationship with police departments all together and bring discipline back into the classroom.

It is not enough that permanent police patrols discontinue and be removed from campus; the relationship between schools and police departments that facilitate any call for service from police that does not relate to a genuine concern for safety should be severed completely. Even during the COVID-19 pandemic and in the midst of distance learning (and thus the removal of students away from SROs), school officials still call on police to enforce discipline. In Baltimore County, Maryland, a teacher reported an 11-year-old student to school administration because a BB gun was visible over his camera during the virtual class. The 11-year-old was unaware that the BB gun was visible in the background. Nevertheless, school administrators called the police requesting the home be searched. Later, the teacher and administrator cited a school rule prohibiting students from bringing guns to school, and claimed the rule extended to virtual classes.

The preoccupation with behavioral control and the demand for compliance proliferates both school and policing institutions. Both institutions have a history of racial discrimination and engaging in practices that have a disproportionately negative affect on people of color. The implementation of police in school is in large part a product of the “tough on crime” era and “superpredator” myth, which carries with it a lack of legitimacy and signals a need to remove police from schools altogether. Just as those policies lead to mass incarceration in the U.S., they lead to students being pipelined out of school and into prison themselves.

The removal of police from schools will affect quick and positive change for students in their learning environment, decrease referrals to the juvenile justice system, and provide an environment free from the threats SROs pose that our courts fail to protect students against. However, the complete removal of SROs and the severing of school-police relationships is a first step. Institutional and individual racism and biases within the school must be addressed to effect long lasting positive changes. Teachers and administrators must learn how to discipline and manage classrooms without zero-tolerance policies and without relying on SROs to wield authority over students. The complete removal of police presence from schools should be the end of an era in school policing, but the beginning of a new era in teaching and school discipline.