From Fear to Rage: Black Rage as a Natural Progression from and Functional Equivalent of Battered Woman Syndrome 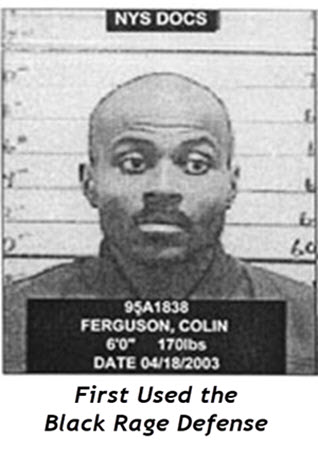 Between 1993 and 1995, Americans witnessed a series of notable, highly publicized criminal trials. The most recent notable trial, that of O.J. Simpson, resulted in a not guilty verdict that proved difficult for some to accept. The criminal verdict also was accompanied by a decrease in the level of faith in the criminal justice system. For many, however, doubts about the ability of the current criminal justice system to punish wrongdoers and by extension, to protect society at large, likely predated the Simpson verdict.

From the much publicized Menendez trial, to the much discussed Bobbitt trial, Americans have questioned judicial acceptance of “abuse excuses.” When evaluating the guilt or innocence of the accused, jurors were urged to consider battered child syndrome in the Menendez trial and battered woman syndrome in the Bobbitt trial. Both battered child syndrome and battered woman syndrome are commonly asserted abuse excuses. Although some people may not accept them as valid defenses to criminal behavior, defense attorneys expect to use abuse excuses whenever the opportunity should present itself. Few people, however, anticipated the black rage defense claimed by Colin Ferguson, the assailant in the Long Island Railroad shooting, and even fewer people were willing to accept the black rage defense. Some commentators argue that as long as the excuses are legitimate, they should be allowed. Others, including some defense attorneys, warn that accepting an expanding number of abuse excuses as defenses eventually will undermine the functioning of our criminal justice system.

The first section presents a brief overview of traditional defenses to homicide such as self-defense and insanity and addresses the admissibility of psychological expert testimony in general.

The second section defines battered woman syndrome, battered child syndrome, and black rage and analyzes the method by which courts accept and employ each defense.

The third section argues for admissibility of expert testimony regarding black rage in order to establish a defendant's insanity. This section also asserts that battered woman syndrome and black rage should receive equivalent treatment.

Finally, the fourth section cautions that although black rage theoretically is viable, in practical application the consequences of accepting black rage may prove too enormous for it to become a successful defense.

The viability of black rage as a defense to the homicide of white victims by black defendants remains uncertain. Permitting expert testimony regarding black rage and its relation to insanity would not alter the course of criminal jurisprudence significantly. Rather, admitting expert testimony regarding black rage would serve to provide a more complete picture of the accused's circumstances for the trier of fact. Battered woman syndrome and battered child syndrome acknowledge the fact that physical and sexual abuse leave psychological scars on the victim. Black rage similarly can illustrate how emotional, economic, and psychological abuse by a racist society leave psychological scars on the black victim. Regardless of whether courts believe that black rage is a catalyst for insanity or whether courts view black rage as another abuse excuse, similar to battered woman syndrome, expert testimony regarding black rage should be admitted by the court in order to assist the trier of fact.

The trier of fact will have the most difficult task of assessing black rage. The trier of fact must carefully evaluate complex psychological testimony while balancing legal and societal interests. A complete balance ultimately should lead the trier of fact to a verdict of NGRI. NGRI allows criminal commitment without finding the defendant was legally capable of knowing and appreciating his actions. Verdicts pronouncing legal insanity however, generally are not favored in society.

Law and society are irrevocably intertwined and functionally interdependent. Society legitimately fears letting murderers roam free. Likewise, the judicial system has a legitimate interest in punishing wrongdoers and deterring potential wrongdoers. These interests, however, should never be furthered at the expense of those who cannot form the requisite intent to commit the crime charged. To allow unjust punishment and incarceration because of societal fears or because of the inability to understand and cure the racism that triggers black rage would produce more harm to America's judicial system than the so-called “abuse excuses” themselves. In the final analysis of black rage, courts are left in the undesirable position of deciding to what extent and by which device the criminal justice system will be harmed: by expanding current abuse excuses to include black rage and alienating society or by denying a black rage sufferer an opportunity to enter evidence of black rage, thereby undermining the mens rea element in criminal jurisprudence.