Beyond Borders: How Principles of Prison Abolition Can Shape the Future of Immigration Reform 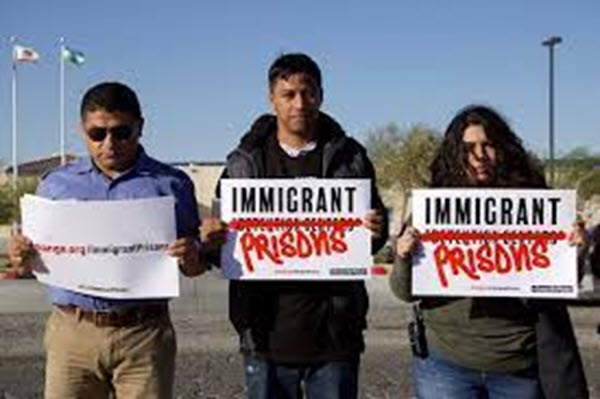 Prison abolition is a movement that advocates for moving beyond reliance on incarceration and punitive law enforcement responses to the social harms we conceptualize as crime. Prison abolition is often used as an umbrella term, referring not only to the work of activist movements and advocacy groups but also to the large body of writing and theory that has emerged on the subject. Pointing to the inhumanity of incarceration, its high economic cost, and its inadequacy as a response to the complex social issues that contribute to crime rates, abolitionists are critical of the ever-increasing role incarceration plays in American society. Instead, abolition movements generally advocate for positive social projects that address the root causes of crime and for restorative justice methods that focus on repairing harm rather than punishing or imprisoning offenders. As leading abolitionist activist and scholar Angela Davis writes, abolition asks us to “envision life beyond the prison.” On this point, abolition movements also stand in contrast to efforts focused solely on reforming imprisonment and the criminal legal system at large. From an abolitionist perspective, seeking to reform incarceration without questioning its necessity reinforces the idea that “nothing lies beyond the prison.”

Prison abolition, despite gaining recent popularity in public discussion, is not a new concept. The tenets of prison abolition have a long history, dating back to eighteenth- and nineteenth-century discussions of prisons and policing as the main forms of punishment and responses to crime. Additionally, abolition theory draws significantly from the slavery abolition movement, such as the writings of W.E.B. Du Bois. Du Bois called for the abolition of slavery to be “a positive project,” requiring the creation of new institutions to empower those formerly enslaved, rather than merely a “negative one,” stopping at the eradication of the forced labor of slavery. Modern prison abolition theory similarly calls not only for the “negative” eradication of prisons but also for the “positive” creation of institutions of social support as a continuation of the work done by slavery abolitionists. In fact, Davis points to prison abolition as the next step following the abolition of slavery, the abolition of lynching, and the abolition of segregation; each is an institution it was once impossible for many to imagine life without.

Despite the movement's historical ties, many heard the term “prison abolition” for the first time in recent news and public discourse. In the summer of 2020, following the killing of George Floyd by law enforcement officers in Minneapolis, the United States experienced nationwide protests and civic unrest in response to the continued brutality against Black Americans at the hands of police. In the wake of these protests, the nation seemed to face the question of racism and criminal justice in the United States with renewed energy, and mentions of prison abolition and calls to defund the police appeared in mainstream media. However, even before this, activists from the Black Lives Matter movement, scholars such as Ruth Wilson Gilmore, and even U.S. Representative Alexandria Ocasio-Cortez had begun to bring prison abolition more squarely into the public arena.

This increased national discussion of more “radical” changes in the criminal context also mirrors the national conversation around immigration enforcement. In recent years, immigration enforcement has come under increased scrutiny following the Trump administration's controversial family separation policy, under which minor children were taken from their parents and placed in detention facilities as a result of a zero-tolerance policy of federally prosecuting all unlawful border crossings. Alongside this criticism has been increased discussion of more radical, abolition-minded immigration reform efforts, such as calls to abolish Immigration and Customs Enforcement (ICE) and to end immigration detention entirely.

As plain-talking President Harry Truman put it when he unsuccessfully vetoed the Immigration and Nationality Act of 1952, the quota system was premised on the view “that Americans with English or Irish names were better people and better citizens than Americans with Italian or Greek or Polish names. It was thought that people of West European origin made better citizens than Rumanians or Yugoslavs or Ukrainians or Hungarians or Balts or Austrians. Such a concept ... violates the great political doctrine of the Declaration of Independence that 'all men are created equal.”’

Further, individuals have historically been targets of immigration enforcement for even perceived nationality--based upon their race. The modern immigration rhetoric of the Trump administration has been criticized as thinly veiled racism against the Mexican, and more broadly Latinx, communities. Even those immigration policies that are not expressly discriminatory often have racial impacts, which are “often hidden by the opaque technicalities of the immigration laws.” The immigration system not only disproportionately deports Latin-American males in terms of sheer numbers but has also been demonstrated to function in a way that is disproportionately anti-Black.

The criminal legal system, though different in its origins, also shares a history that is inextricably intertwined with America's legacy of racism-- specifically, anti-Black racism. Many have highlighted the role that criminal law played in the continuing oppression of Black communities following the abolition of slavery. Black Codes--legislation passed in former slave states--criminalized behavior such as “vagrancy” and “absence from work.” This created crimes “for which only black people could be 'duly convicted”’ and consequently led to a sharp rise in Black prison populations. Despite the eradication of explicit racial distinctions in criminal law, the criminal legal system continues to operate in a racially disparate manner:

These disparate impacts permeate every step of the criminal legal system and continue to be explored as complex social and political phenomena, from the relationship between poverty, segregation, and policing, to the racial impact of drastic sentencing disparities between crack and powder cocaine, to inconsistencies in the imposition of the death penalty based on the race of the defendant and victim.

The racial histories of the immigration system and criminal legal system, as well as the two systems' similarities and differences, are rich topics, any of which could be the subject of an entire paper on its own. This Note briefly summarizes them only to demonstrate that the principles which guide abolition in the criminal context can be aptly applied to reform efforts in the immigration context as well.

Second, and related, both systems seek to categorize individuals--to determine who “belongs” in society and who does not--with serious consequences for individuals who are placed into certain categories. Immigration law “has been understood as the study of the acquisition of membership and its corresponding rights and privileges.” The Immigration and Nationality Act (the legislation which governs immigration law) contains provisions meticulously detailing who is subject to immigration detention, who is subject to removal or deportation, and who is eligible for forms of relief like asylum. The role of an immigration judge or agency official is then to parse exactly where an individual falls within this complex system of buckets. As such, immigration enforcement is engaged in a practice of categorization and labeling; there are those who may be granted citizenship and its corresponding rights and those who may not. Similarly, the criminal legal system seeks to determine whether someone should be found guilty and labeled as a criminal, bearing not only the moral culpability of that label but also the practical consequences that follow as well. Often included in those consequences is incarceration, a fate reserved for those who are categorized as criminal. Both the immigration system and the criminal legal system expend significant government resources categorizing and labeling individuals. In both cases, these labels have a significant impact on people's lives: possible detention and deportation in the immigration context, and possible incarceration and other consequences of conviction in the criminal context. Given these structural similarities, many tenets of prison abolition can also be applied to the immigration system.

Abolition theory provides an applicable framework to analyze immigration enforcement and conceptualize a different approach to migration. Though the necessity of strict immigration enforcement to a safe and functioning society may seem like a foregone conclusion, history shows otherwise. In reality, U.S. immigration policy has fluctuated widely, with the modern restrictionist approach only developing over the last several decades. Further, there is ample evidence that this approach not only has not met its purported goals but has also actively worked against the interests of the nation. In the place of this restrictionist regime, an approach that presumes that migration is lawful can be conceptualized. Further, the immigration system exacts an incredibly high human cost that makes its functioning additionally difficult to justify. These principles can animate immigration advocacy efforts by challenging the assumption that enforcement is necessary and avoiding reforms that only validate and expand the system of enforcement. As abolition theory encourages us to envision, there is something beyond immigration enforcement.

Anna Hales is a 2021 J.D. graduate from the UC Irvine School of Law.