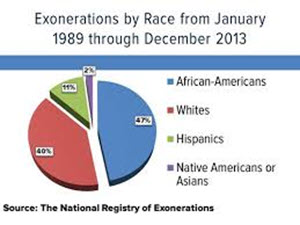 Wrongful convictions are the result of a combination of errors and biases, which not only undermine the credibility of the criminal justice system, but have lifelong detrimental effects on exonerees and their families (Chunias & Aufgang, 2008; Weigand, 2008). The National Registry of Exonerations (2020) has identified more than 2,600 exonerees, who have collectively lost more than 23,000 years of freedom. Many of these exonerees are Black and Indigenous individuals, who are not only overrepresented in the prison population in the United States and Canada, respectively (Carson, 2018; Department of Justice Canada, 2017), but are also overrepresented in the proportion of exonerees (Innocence Canada website: [http://www.innocencecanada.com/]; The National Registry of Exonerations, 2020; Roach, 2015). Specifically, in the United States, although Black individuals represent 13% of the population, they comprise 33% of the prison population, and 48% of the proportion of exonerees (Carson, 2018). In Canada, Indigenous individuals represent 4.3% of the Canadian population, but comprise 27% of the prison population, and approximately 20% of the proportion of exonerees (Department of Justice Canada, 2017; Roach, 2015).

While being released from prison is undoubtedly a triumph for exonerees, it does not represent the end of their struggle. Unfortunately, exonerees report facing numerous challenges when attempting to reintegrate back into their communities (Roberts & Stanton, 2007; Westervelt & Cook, 2012). For example, exonerees report experiencing negative psychological effects upon release, including feelings of isolation and low self-worth, difficulty trusting others, and poor emotion regulation (Cooper & Berwick, 2001; Haney, 2003; Westervelt & Cook, 2010). Research has demonstrated that reintegration programming such as vocational training, work release programs, and halfway house programs increase the likelihood that individuals secure employment and housing upon release (Bouffard, MacKenzie, & Hickman, 2000; Seiter & Kadela, 2003). However, wrongfully convicted individuals are typically ineligible for, and thus do not receive, these services (Roberts & Stanton, 2007; Westervelt & Cook, 2010).

In addition, exonerees report experiencing stigma from members of their communities, which may further complicate their reintegration efforts (e.g., Blandisi, Clow, & Ricciardelli, 2015; Rade, Desmarais, & Mitchell, 2016; Westervelt & Cook, 2010). In Canada, exonerees are not provided with a legal designation or written documentation certifying their innocence and thus they are unable to definitively “prove” their innocence to members of the community, employers, or landlords. In fact, past research on exoneree stigma has found that some individuals even doubt DNA exonerations (Clow, Ricciardelli, & Cain, 2012; Scherr, Normile, & Putney, 2018), which are arguably the most convincing cases of factual innocence (Findley & Scott, 2006). Although the majority of Canadian exonerees eventually obtain an acquittal (Campbell, 2018), many guilty individuals are also acquitted, and thus an acquittal may also fail to serve as conclusive proof of innocence. Because it is so difficult for exonerees to prove their innocence, individuals, such as employers and landlords, may believe that exonerees who maintain their innocence are being dishonest, and therefore view them as guilty.

According to the just-world hypothesis (Hafer, 2000; Lerner, 1980; Reich & Wang, 2015), individuals want to believe that the world is a just and fair place, and in a just and fair world, innocent people are not convicted of crimes they did not commit. Therefore, to maintain just-world beliefs, individuals (e.g., employers and landlords) may employ strategies such as victim blaming and derogation to rationalize their beliefs that exonerees must not truly be innocent (e.g., Hafer, 2000). Therefore, the just-world hypothesis predicts that exonerees may experience stigmatization to a similar degree to releasees, albeit for different reasons. While releasees may be perceived as having committed a crime for which they have been appropriately punished, exonerees may be perceived as having also committed a crime but without the subsequent consequences. Alternatively, individuals may be unable to reconcile how an injustice such as a wrongful conviction would happen to a “good” person. Consequently, individuals (e.g., employers and landlords) may perceive exonerees as “bad” people who have invited their circumstances in some way. Therefore, although landlords may be hesitant to rent to a releasee, they may be equally hesitant to rent to an exoneree.

Understanding the stigma that exonerees experience is particularly important for two reasons. First, research suggests that individuals who experience stigma are at an increased risk of experiencing physical and mental health issues such as depression, low self-esteem, and low self-worth, compared to individuals who do not experience stigma (Link & Phelan, 2006; Pascoe & Smart Richman, 2009; Schmitt, Branscombe, Postmes, & Garcia, 2014). Second, the Canadian government has not yet introduced legislation that provides financial compensation or reintegration services to exonerees. In fact, in most cases, the government fails to apologize for these miscarriages of justice (Blandisi et al., 2015; Ontario Ministry of the Attorney General, 2016). By shedding light on exonerees' postrelease experiences, we can increase public awareness about the stigma that wrongfully convicted individuals experience and the consequences associated with this stigma. With greater public awareness about these issues, governments may be pressured to develop compensation statutes and programming for exonerees (Burstein, 2020).

Individuals who have been wrongfully convicted have endured a grave injustice. Exonerees have expressed, anecdotally, that they experience difficulty obtaining housing upon release. This study is the first to experimentally test--and provide empirical evidence for--their reported difficulties. With more research in this area, we can move toward a discourse that acknowledges the negative effects of, and barriers associated with, wrongful convictions. Ideally, these strides will lead to greater resources and services for exonerees' reentry.