zPolice- Cops Killing Kids Has Got to Stop! 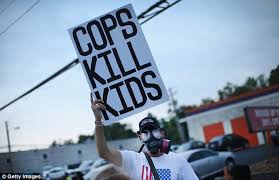 Kameron Prescott is dead — the latest in a horrific string of children killed by America’s fearful and quick-to-shoot law enforcement professionals.

Six-year-old Kameron, who was shot in Bexar County outside San Antonio, Texas, wasn’t killed like Tamir Rice in Cleveland, who was mowed down by a police officer within seconds of his arrival on the scene as the boy sat peacefully on a bench in a park pavilion holding a toy gun. Kameron wasn’t deliberately shot. He was just “collateral damage” in America’s militarized police war on the public — killed inadvertently by a deputy’s bullet which had missed its intended target (an unarmed woman), instead penetrating the flimsy wall of the trailer and the soft abdomen of the little kid who was playing peacefully by himself inside.

The reason Kameron had his all too short life cut brutally short was because some deputy “feared for his life.” What the shooter feared was 30-year-old Amanda Jones, whom he had been reportedly chasing for two hours through the woods and a deep stream after having interrupted her allegedly trying to break into a car. According to news reports, halfway through the long pursuit, Jones had been found by police hiding in a closet in a mobile home she had broken into to. They claimed she had “brandished a gun,” though inexplicably, she had managed to escape them and run off again.

When the Bexar County sheriff’s deputies — four of them by then — finally caught up with her, Jones was standing on the porch of young Kameron’s trailer. At that point, whether she in fact had ever actually had a gun at all, there is no indication that she had a gun in her hand. But no matter, the four deputies on the scene all reportedly opened up on her with their service revolvers and also with a rifle. They managed, among them, to kill her, but they also missed her in their panicky fusillade, and one of those errant bullets pierced the trailer and killed the little boy inside. No gun was found on the scene, which raises the question: Why did they shoot the woman? We’re to believe that four burly sheriff’s deputies — no doubt wearing body armor — couldn’t subdue an unarmed young woman?

There were reportedly two adults — grandparents according to one report, unrelated to Jones — also inside the trailer who had better luck than little Kameron. They were not hit by any stray bullets, but I’m sure their hearts were broken.

Sheriff Javier Salazar told reporters somberly at a press conference that “any one of my us” in the department would “gladly have traded places with that boy.” Nice sentiment, sheriff, but I really doubt any of them would have actually taken Kameron’s bullet for him. The reason the police unloaded their weapons at Jones was precisely because they are so afraid of being shot they’d kill an unarmed woman without hesitation, and not worry about innocent bystanders either.

The point is, cops and sheriff’s deputies should know that a trailer doesn’t offer much protection against a bullet. A standard-issue police .45-calibre projectile will tear right through the light tin of such a structure and thus pose a grave risk to anyone who might be inside.

The deputies should have assumed immediately that it was possible there might be people inside. That is or should be a key part — actually the key part — of their job: Protecting the public. They failed miserably at that.

They just blew the perp away, and they blew away an innocent six-year-old child along with her.

Sheriff Salazar placed the four deputies who killed Jones and little Kameron on five days’ suspension, but he also told reporters, “In my opinion it’s a tragic accident that led to the death of this young man (sic). We are looking into all of it. Internal Affairs is still investigating it. But again preliminarily it appears that policies and procedures [on use of deadly force] were complied with.”

First of all let’s get one thing straight, Sheriff Salazar, Kameron is not, and now never will be a “young man.” He was a six-year-old little boy, and that’s the way he should be described as we examine at what happened.

Secondly, if this sorry chase and slaughter was done by the book, as you say, with all Sheriff’s Department policies “complied with,” then those policies you have in your department on use of force need to be scrapped and completely redrawn.

I am sick to death of reading about innocent people, and especially young kids, dying because some “brave hero” cop “feared for his life” or thought someone “might” have a gun. Then the story is always the same: the cops fight to keep their jobs, and the investigation ends up clearing them. (When have we seen a cop who kills an innocent person, especially a child, through carelessness or cowardice come forward and say he or she is quitting the force because of doing something awful?)

The primary goal of a police office should be protecting human life. You can’t do that if you’re shooting up a trailer without knowing for sure that it’s empty — especially if the person you’re shooting at doesn’t even have a gun to threaten you with.

But I’d go further. If the four deputies who had cornered the late Amanda Jones hadn’t been so quick on the trigger, they could have stayed back at a safe distance, spread out to prevent her from running again, and tried to talk her down, meanwhile getting a chance to check out exactly how threatening she might be. That would have also enabled at least one of the officers to get to an angle where, if she did somehow manage to pull that nonexistent gun out of her waistband, he’d have been able to get a shot off at her from an angle that wouldn’t have put people inside the trailer at risk (and maybe taking the time to try and wound instead of kill her). Either way little Kameron would at least still have a chance to grow into a young man.

Some people, I know, are going to argue that you cannot second guess a cop in situation like this, but I disagree. The problem is that cops are given a blank check to fire their weapons if they “feel threatened.” That’s not the standard we should be using.

Too many innocents, including children, are dying on the basis of it.

Police should stick with “protect and serve.” Their guns should only be used as a last, not first resort, and then only if there is no risk posed to innocents. If someone cannot operate under those conditions, he or she should look for a different career.