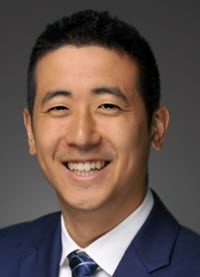 I am the son and grandson of courageous immigrants who left home and created a new life in the United States. Though my family came to the United States for myriad reasons, one driving factor was the search for a stable economic and political environment. Their lives had seen great political upheaval and societal change--following the fall of the last Chinese dynasty, my grandparents witnessed the birth of the Chinese Republic, the Japanese occupation, and the founding of the People's Republic of China.

I grew up listening to stories of my family's hard work and sacrifices after they came to the United States. As a doctor, my paternal grandfather never left the hospital during his first eight months in the United States. Instead, he ate, slept, and diligently worked to improve his English. My paternal grandmother worked full time as a nurse and raised my father and his brother. My maternal grandmother raised four children on her own, all while working full time at a print shop.

My family did the hard work. They learned English without an accent, became professionals, and assimilated to create opportunities for me to reap the benefits of the “American Dream.” My father grew up being taught the adage to “work twice as hard as a white person to be treated as his equal.” They swallowed the indignities and injustices of being treated unequally at work, and, as a result, I was raised with a life of great privilege. However, life and the law are more complicated than the proverbial house with a white picket fence that my forebearers were able to provide for me.

Realizing this “American Dream” came at significant personal cost. For my family and countless others, they were uprooted from home--taken from a rich cultural context filled with music, food, and a shared mother tongue. They exchanged mooncakes and ducks for mashed potatoes and turkeys on holidays. Implicit in the directive to learn to speak English without an accent was learning to be white.

This Note investigates the impact Asian Americans have had on the development of law in the United States, starting with outright exclusion from entry to the United States, moving through the civil rights laws of the 1960s, and ending with the present where discrimination is more prevalent in places the law does not yet reach. Specifically, there are now covering demands placed on Asian Americans to conform to the trappings of white U.S. culture. Though subtle and at times less harsh than exclusion, the implicit and explicit demands to cover rest on the United States' history of racist statutes, case law, and policies. This Note stands on the shoulders of a long line of scholars who have combatted the erasure of Asian Americans from the law by publishing “identity projects” that challenge and nuance the Black-white dichotomy prevalent in the U.S. legal system.

Part I surveys the xenophobia in the late 1880s that was rooted in the belief that Asian immigrants were inferior and perpetually foreign. It also examines litigation Asian immigrants brought trying to claim whiteness and the Alien Land Laws that prevented land ownership and how these laws seeded the ground for the Japanese internment. Part II examines the cultural makeover of Asian Americans following the enactment of the civil rights laws of the 1960s, exploring assimilation and the model minority myth.

Part III investigates the tension faced by the descendants of earlier generations of Asian Americans, those who have benefitted from assimilation-- whether to claim honorary white status or to further ally themselves with Black, Indigenous, and People of Color (BIPOC) communities. Finally, Part IV proposes that Asian Americans could and should do more than simply respond to racism and instead work towards racial solidarity while challenging implicit demands to cover.

There is a Japanese concept called “kimin,” which can be roughly translated as “abandoned people.” Law Professor Robert Chang wrote that this concept resonates when thinking about Ozawa because Takao Ozawa had been forsaken by both a Japanese government that did not join his lawsuit and the United States, which refused him citizenship. Asian Americans have spilled much ink over defining ourselves in proximity to and distance from whiteness. Unfortunately, neither path allows for a full celebration of our heritage nor an acknowledgment of the deep cost associated with assimilation and covering.

As the United States deals with a resurgence of latent anti-Asian hate, the perpetual foreigner stereotype and model minority myth gained greater visibility. The Japanese American internment, the Alien Land Laws, and even the Chinese Exclusion Act seemed less historical artifacts and more unignorable pieces of United States history. Encouragingly though, many Asian Americans refused to be silent and instead marched in solidarity with BIPOC communities-- viewing our liberation as inextricably tied to theirs. As we navigate this next decade, hate crimes, education, and immigration will continue to be contested areas of law. Asian Americans must bring the lens of coerced covering to the conversation so that we can fight to fully realize our humanity.

I am here thanks to the sacrifices of my family and intend to use that privilege to speak out loudly for justice. While my family obtained stability because of their hard work, important parts of “home” were lost in the process of covering. Covering meant conceding that we would play by the rules of white supremacy. I have both the opportunity and responsibility to chart a new path. Before notions of the perpetual foreigner render Asian Americans kimin--never properly here, never properly there-- it is past time to assert a collective identity that takes our history into consideration and celebrates the richness of our humanity. This may be the only way to retain our integrity.