2015 Report on Descendants of Africans Enslaved in the United States

WHO ARE DAEUS AND WHY FOCUS ON DAEUS? [6]

13.     Black Americans are Americans of black African descendant, including African Americans and immigrants from Africa, South America, Europe, Asia and the Caribbean. [7]

15.     To understand the effects of systemic white supremacy and anti-black racism in the US, we need to understand the historical circumstances that make DAEUS an especially vulnerable group. Many groups address intersectionality the compounding effect of being for example, gay, fe male,  , Latino. Few address the impact of being descendants of enslaved Africans and legal apartheid.

16.     TThe existence of DAEUS in the United States resulted from a unique confluence of historical events that brought Europeans, Native Americans, and Africans together, creating the so-called “New World” of the Americas based on Atlantic worlds of economic, cultural, and political connections. The racial and ethnic uniqueness of DAEUS from the “discovery” and colonization of this “New World” and by subsequent events that culminated in the creation of the United States. The United States established a distinctive legal framework that espoused freedom and democracy while brutally suppressing people of African descent regarding them as nothing but property and chattel. Over 544 years, in three phases of American history, the law has been used to oppress people of African descent: the invention of racial slavery, the re-creation of slave-like condition through legal Apartheid (also known as Jim Crow) and the re-creation of Jim Crow through the new American Apartheid.

17.     Understanding this historical trajectory is essential to understanding the situation of DAEUS. The cultural and social dynamics that followed each phase of these historical periods targeted DAEUS. DAEUS fought, struggled, and died to hold the nation founded on the principles of freedom and democracy to these philosophical ideals. From 1492 through the Modern Civil Rights Movement to today in the new American Apartheid, a system of white supremacy based on anti-black racism has been allowed to continue. Thus, the Descendants of Enslaved Africans have been vulnerable throughout this history.

18.     The situation of DAEUS is a result of racial slavery. Without the mass transfer of people from the African continent to the Americas, the invention of the white race, the construction of racial slavery under British colonial rule, and the consequent racial mixing with people of European and Native American descent, the racial category of DAEUS would not exist. Because of the brutality of American slavery, most DAEUS cannot trace their family histories beyond their sale to a slaveholder.[8] DAEUS, who can trace their ancestors to the period of slavery, usually cannot identify the trail into any specific country or tribe in African. They have no knowledge of their African ancestry, only that their forebears arrived in the "New World" as property. This is not only tragic, but it uniquely defines native-born DAEUS as a special group in world history – we are a product of the creation of this “New World” and deserve special recognition as a people.

19.     The horror of this Middle Passage was the start of the DAEUS identity. The survivors of the Middle Passage came to comprise a generalized African culture through this shared experience of brutal suppression and exploitation.

20.     In the “New World,” enslaved Africans, burdened with the responsibility of trying to understand themselves and form a new identity as their captors tried to strip them of their psychological and cultural individuality, identity, and dignity. In the British North Americas, the Africans were sent into regionally distinct colonies, each having established legal perpetual and hereditary slavery based on race. In each of these 13 colonies, people of African descent were held as property, and free blacks were less than and separate from whites under the law. Whether enslaved African or free, to be black meant enslavement or in a state close to slavery. For example, within the first century of Virginia’s establishment (the flagship colony of the British), laws defining hereditary enslavement were based on the woman’s enslavement status. This enabled holders of enslaved Africans to prosper from black women’s reproductive abilities through rape and forced breeding of enslaved women to natural increase their property ownership and the profit of the slaveholder. There were miscegenation laws, where free blacks and free whites could not legally marry. The children of such unions were deemed “bastards” and were bound out by the courts. Slave-owners frequently separated enslaved children from their parents. Slaveowners socialized enslaved African children as subjected people, as servants. The model of enslavement and the institution of racial slavery based on black subjugation in this first British colony in the New World set up the legal and economic model of slavery in Britain's other colonies.

21.     There have been many deep and profound questions about how black slavery and white freedom could and would co-exist in a nation that was founded not only religious freedom but also upon the principles of economic and political freedom and opportunity. Holders of Enslaved Africans wrote the founding documents like the Declaration of Independence and the United States Constitution. This allowed for an acceptance of the coexistence of slavery and freedom in the American mind, and the centrality of racial slavery and black subjugation in the nation’s legal and racial consciousness. Americans have therefore inherited an acceptance of legal racial disparities. Even the U.S. Constitution did not have any explicit references to slavery or enslavement; it was left up to federal and state lawmakers to decide whether or not a state would be slave owning. This conflict of state laws led to the American Civil War.

22.     Even though the Civil War was fought to eliminate slavery and Constitutional amendments secured citizenship rights for DAEUS, the 13th amendment specifically permits slavery and involuntary servitude as punishment for a crime. Thus, a protracted system of black codes established legal apartheid at the federal and state levels. This legal apartheid, commonly known as Jim Crow, resulted in separate and unequal educational facilities and opportunities, substandard housing, limited access to quality health care, and limited economic and political opportunities. Also, lynchings and murders of DAEUS men and women went unprosecuted and created a climate of terror under which DAEUS had no legal recourse.

24.     This history, of American racial slavery and legal apartheid, survives in the nation’s racial and legal consciousness and perpetuates racial disparities in the United States. However, many DAEUS without doing their own family’s research, only know these broad strokes (if that) in their individual identity as a people or in their understanding of self. It is a rich history, but one that is unveiled only through study and self-education. What makes DAEUS unique is that they were placed into their condition by force. Their segregation and subjugation as a result of their historical, political, and cultural, exploitation benefitted the United States. The enslavement of African thus gave other oppressed groups a legal, cultural, economic, and political advantage when they voluntarily migrated to the United States. 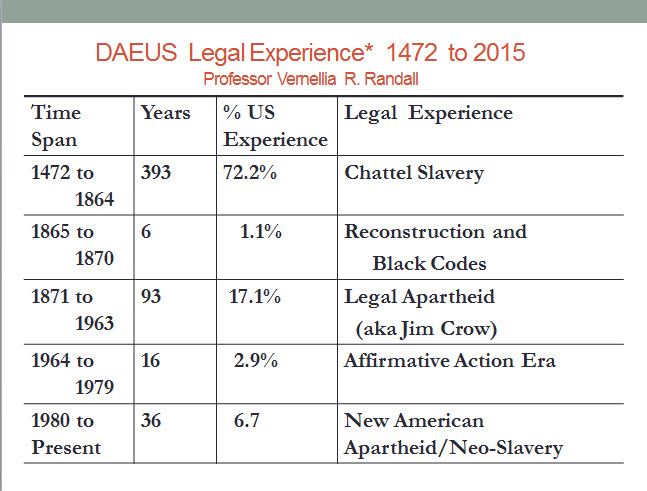