2015 Report on Descendants of Africans Enslaved in the United States

ANTI-BLACK RACISM AND ITS IMPACT

25.     "There is no hierarchy of oppressions where race is concerned, but anti-black racism is the fulcrum of white supremacy." Scott Nakagawa[9]

26.     A fulcrum is "the spot about which a lever turns" or "one that supplies capability for action." Enslaved Africans and their descendants laid the economic foundation for American prosperity. At the same time, DAEUS became the common enemy to unite "white -skinned" people. Fear and loathing are the driving force of modern-day racial politics. Anti-black biases are so widespread that 75% of whites and 42% of blacks reportedly have a pro-white, anti-black bias.[10]

27.     Anti-black racism is killing the descendants of Africans enslaved in the United States. By looking at the health of DAEUS, one can get a full understanding of the impact of systemic racism.

28.     In the United States, an estimated 80,000 to 200,000 excess black deaths occur each year. "Excess deaths" are those that would not happen if black Americans had the same death rate as white Americans.[11] These figures are the equivalent of one jumbo jet of African-American passengers and crew crashing and killing everyone each day.

29.     The figure on life expectancy can also show the impact of systemic racism on Black Americans. According to the World Factbook of the Central Intelligence Agency, life expectancy at birth is a measure of the quality of life in a country.[12]

30.     Based on international comparisons of life expectancy, the quality of life for black American males and females is worse than males and females in several so-called developing countries, including Chile, Barbados, Cuba and Jamaica. That is if black American men’s life expectancy were ranked as a country at 69 years old, black males ranked 75th behind Jamaica; black women ranked 55th behind Bosnia and similar to Jamaica. [13] This ranking is 45 points lower than white males and 20 points lower than white females. The burden that is being carried by Descendants of Africans Enslaved in the United States (DAEUS) is unknown because the United States does not collect data specific to our status. 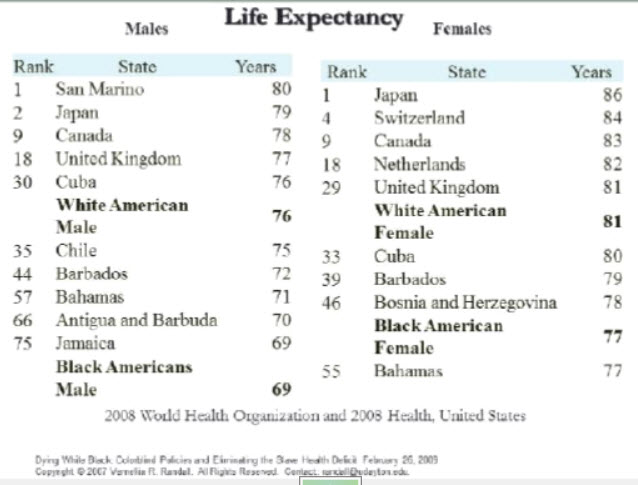 31.    For DAEUS, this difference in health is a result of institutional and systemic racism and the impact of slavery, legal apartheid, and the new American apartheid.

33.     This is because the United States has a system of oppression that is every bit as onerous as legal apartheid. Racially neutral laws and policies form the basis of the new American apartheid. However, these laws and practices are implemented in a way that has an unintended discriminatory effect. US anti-discrimination law addresses only intentional racism. Congressional Republicans and Democrats have both refused to allow DAEUS and other’s access to the courts for implicit and institutional discrimination.

36.     The old system of racism on which much of American law is based requires an explicit belief in white superiority, active promotion of segregation, a belief in a biological-based intellectual inferiority, blatant discrimination and the promotion of terror through lynching and violence. This sort of discrimination is perpetrated by individuals and institutions. In the new American apartheid, the racial discourse and practices that have a discriminatory impact are increasingly covert based on implicit biases. The new American apartheid avoids racial terminology, claims that whites are also victims of discrimination, avoids direct racial references in politics, and has rendered the mechanisms of racial inequality invisible. The new American apartheid has reestablished many of the elements of legal apartheid. Among those elements are stated-sanctioned violence, residential and educational segregation, a system of economics that depends on keeping blacks from fully participating in the system, and restrictions on their political and civil rights.

37.     Both liberals and conservatives promote this new American apartheid. Conservative defenders of the new American apartheid believe that the racial hierarchy is legally irrelevant to the constitutional principle of legal protection unless it is state-sponsored, conscious discrimination and unless that behavior is the proximate cause. The conservative response to racial inequality is to do nothing. Moreover, conservatives are convinced that racial re-marginalized groups should merely choose the proper cultural values so that they can take advantage of the new race-blind landscape.

38.     Liberal supporters of the new American apartheid think that race does matter but not much. They are sometimes capable of being race-sensitive, but rarely. They view frontal attacks on racial conditions as divisive and prefer not to take direct action against racial inequality. They, like conservatives supporters of the new American apartheid, are convinced that racially marginalized groups should just change their cultural values.

39.     What both liberal and conservative supporters of the new American apartheid ignore is that systemic and cultural racism is having a devastating impact on the descendants of Africans enslaved in the United States.

40.     The entire history of enslaved Africans and their descendants has been one of deprivation and oppression. DAEUS ancestors were stolen from the continent of Africa and dragged to the Americas. Slavery in the United States denied enslaved African and their descendants any legal status and severed their connections to their traditional culture, language, religion and history. DAEUS origins are only here in the United States and cannot be compared to African immigrants any other racial or ethnic group. 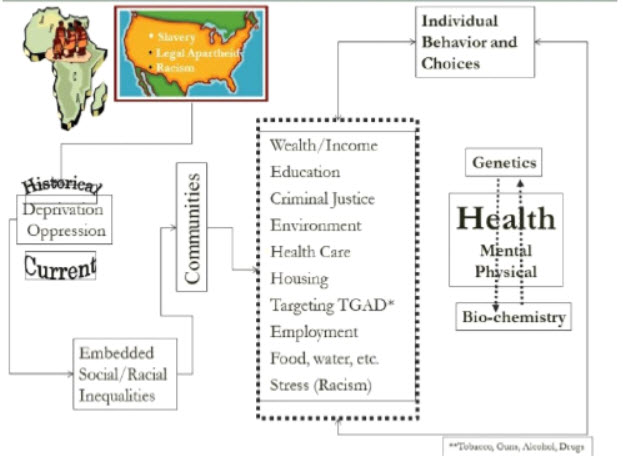 41.     Oppression based on socioeconomic class, gender, religion and sexual identity complicate the situation of some DAEUS.17

42.     DAEUS suffer harm passed down from generations of and a current system of embedded social and racial inequalities that deprive them of opportunities and undermine the welfare of each member of the community regardless of his or her socioeconomic class.

43.     Supporters of the new American apartheid fail to recognize that the choices that DAEUS make are based on the choices that are available to them. In the sea of racial oppression and deprivation, DAEUS do not have the same choices or receive the same treatment of that similarly situated whites do.[14]

44.     In relationship to DAEUS, the United States has violated Articles 2, 3 and 5 of the Convention on the Elimination of All Forms of Racial Discrimination.[15]

46.     Furthermore, United States has blocked direct access to the court for disparate impact discrimination. In 2001, in Alexander v. Sandoval[17], the Supreme Court held that individuals could not sue for disparate impact discrimination because it was a right of action created by regulation. The Court held that the only recourse was to file a complaint with the appropriate government agency. Given the political nature of agency, this effectively limits access to a remedy. This could have been remedied by the passage of a law granting direct access to the courts. However, in the 14 years since that decision, there has been no attempt to solve this problem by any president or Congress. This is devastating since most discrimination is disparate impact or negligent discrimination based on implicit bias rather than intent. Thus, the United States has allowed a law to stand that perpetuates racial discrimination rather than eliminate it.

47.     The United States has established and maintained a system of racial segregation and legal apartheid.[18]

48.      Since slavery, the United States has supported segregation in housing and education. Despite the Brown v. Board of Education of Topeka[19] and Civil Rights Act of 1964[20], the segregation and isolation of black children has increased. In fact, “40 percent students attend schools that are more than 90 percent minority, up from 34 percent 20 years ago. Then, black students typically attended schools where 40 percent were low-income; it is now 60 percent.”25

49.     Furthermore, through mass incarceration, United States have de facto re-established slavery. The prison system has become a financial center fueled by black bodies. “Between 1990 and 2009, the inmate population of private prisons grew by 1,664%. Today approximately 130,000 people are incarcerated by for-profit companies. In 2010, annual revenues for two largest companies — Corrections Corporation of America and the GEO Group — were near $3 billion.”[21]

51.     DAEUS communities are immersed in a sea of systemic and cultural racism that limits the individual and community choices and opportunities.[23]

52.     Systemic and cultural anti-black racism are evident in black-white disparities in every major area of American life.[24] For instance:

Wealth and income For every $6.00 Whites have in wealth Blacks have $1.00.[25] For every $2.00 Whites have in income Blacks have $1.00.[26]
Educational For example, Black students represent just 18 percent of preschool enrollment but 42 percent of the students who are suspended once and 48 percent of the students who are suspended more than once.[27]
Criminal Justice For example, Black men are more than six times as likely as white men to be incarcerated.[28]
Healthcare For example, Blacks are 3 times less likely to receive heart catheterization, angiography or coronary heart bypass even when one controls for severity of Illness and ability to pay.[29]
Housing For example, Blacks since 2007, nearly 8% of Black Americans lost their homes to foreclosure compared to 4.5% of whites at similar income levels. In fact, Black Americans are more than 70% more likely to have been foreclosed.[30]
Employment For example, the black unemployment rate averaged 16.1 percent in April, May, and June 2011, compared to an average of 7.9 percent for whites. That is, the Black unemployment rate two years into the recovery was more than twice as high as the white unemployment rate.[31]
Food For example, only eight percent of blacks live in a tract with a supermarket, compared to 31 percent of whites.[32]
Land For example, Black Farmers represent less than 1% of all farmers in the U.S., but more than 60% are in jeopardy of losing their land and their farms[33]
Targeting Black communities with tobacco, guns, alcohol, and drugs.[34]

The total 2015 Equality Index of Black America was 72.2%, meaning that black Americans enjoy less than 75% of the benefits and privileges of white Americans.[35]

53.     The situation has gotten worse since 2006, with the equality index dropping by two points. The most disturbing drop is in “Social Justice."43 In eight years, Blacks have lost almost 20 points in “Social Justice," meaning that
Blacks have only slightly more than 50% of the rights and opportunities that whites do when it comes to “equality before the law” and “victimization and mental anguish." 44 This is due to rampant racial profiling and "Stand your Ground" laws that permit killings based on fear and suspicion. Furthermore, given the anti-black bias, these laws are not enforced equitably.

54.     Even more disturbing is the widespread lynching of Black Americans. Between 1882 and 1968, there was 3446 known lynching. That is, on average 40 per year.[36] In 2012, there were 136 extrajudicial killings or lynching of unarmed black men by police, security guards and vigilantes. Thus, in 2012, one black person was killed in an extrajudicial shooting every 28 hours.[37]

55.     Another area of racial oppression is mass incarceration. 1 in every 15 Black men are incarcerated in comparison to 1 in every 106 white men.[38] Black women are three times more likely than white women to be incarcerated.48

56.     This is especially disturbing as the for-profit prison system takes over responsibility for incarceration. Given the profit and economics in prisoners, it returns black bodies to the state of slavery and legal apartheid. The federal government has done little to stop this type of racial discrimination.

57.     Systemic and cultural racism has an impact on all people of color: Asian, Native American and Hispanic. Because of Anti-black racism, however, Blacks suffer disproportionately. The burden that is being carried by descendants of Africans Enslaved in the United States (DAEUS) is unknown because the United States does not collect data specific to our status.