The Coronavirus Pandemic And the Demand for Reparations 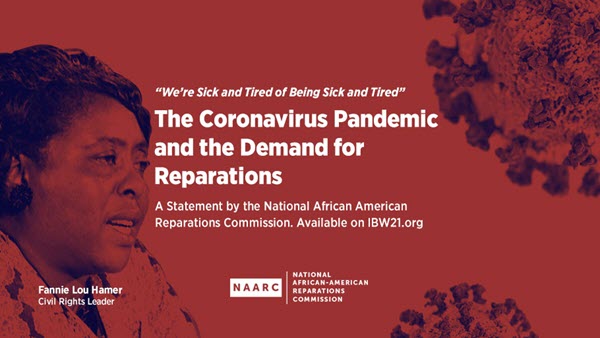 The novel Coronavirus Pandemic has revealed the longstanding disparities in health conditions for African Americans in the United States. Chicago Mayor Lori Lightfoot said she was “shocked” and “disturbed” upon learning that black Chicagoans, who make up 30 percent of the city’s residents, accounted for 70 percent of the fatalities. “Those numbers take your breath away,” she declared. These statistics were “among the most shocking things I think I have seen as mayor.” However, the situation in Chicago corresponds with what is occurring in cities and states throughout the nation. Detroit, Milwaukee, New York, and Newark report similar disparities in rates of infections and fatalities from the Pandemic. The state of Louisiana has a population of 4.6 million, and California has 39.5 million residents. Yet, as of April 6, 2020, California has reported less than 500 deaths from Covid-19, while Louisiana has over 850. African Americans are 34 percent of Louisiana’s population, but are 70 percent of the fatalities, in a state known for its unwillingness to prioritize health and welfare benefi ts for its residents. Many political leaders have expressed their dismay about the health conditions that underlie these statistics, yet anyone at all informed about health disparities for African Americans would not be surprised. The Coronavirus Pandemic has brought into bold display disparities that have existed and remained unaddressed since the founding of the Republic. African Americans have complained bitterly about their lack of access to adequate health care for decades. The National African American Reparations Commission and other champions of reparatory justice believe resources to eliminate health disparities must be a central component of reparations for African Americans [Full Document]