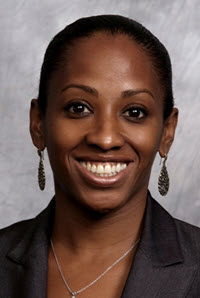 Joseph Garcia knows first-hand about the struggles facing young men of color. As a young man growing up in a predominately black neighborhood, he experienced constant harassment by police and was accustomed to being followed around in stores. Before he attended law school, he viewed the justice system as a fallacy for people that looked like him. He recalls thinking, “How are we supposed to get justice when the system is crooked and corrupt?” His experiences with racism fueled his desire to become an attorney; however, the path to becoming one was difficult as he did not know how to even begin the process. “I had no idea who to talk to [in order] to get into law school; I didn't even know you had to take the LSAT to apply.” Unfortunately, Garcia had to learn about the process on his own; he did not have any friends or relatives that he could ask for help. In fact, at the time, he did not even know anyone that looked like him that was an attorney.

Sadly, Garcia's story is not unique. Maria Cook, a first-generation college graduate who is now in her second year of law school, decided she wanted to be a lawyer after a life-altering event. When she was sixteen, her parents were facing foreclosure and she accompanied her father to court for the foreclosure hearing. She interpreted for him and had an opportunity to speak to the judge on his behalf. The experience left an indelible impression on her.

I saw the way a lot of the people there, who were facing the same situation, were treated; they didn't have anyone because they couldn't afford anyone. And I really felt like there had to be someone who could stand up for them or someone to be there to give them a voice, because I felt I couldn't help anybody else there; it was just me and my dad.

From that moment, Cook knew she wanted to use her voice to help others; she resolved to work hard to do well in school so she would be able to get into law school. However, she also had no idea how to begin the process.

On June 15, 2020, in the wake of the killing of George Floyd, the ABA launched a new Racial Equity in the Justice System website to provide “resources for attorneys, the legal profession and the public on a wealth of issues addressing bias, racism and prejudice in the justice system and society.” Subsequently, in its 2020 Annual Meeting, the ABA House of Delegates adopted several new policies aimed at attacking racial injustice. Among the 60 new policies adopted, there was Resolution 100B, urging governmental bodies to enact legislation banning discrimination on the basis of hair texture and encouraging implicit bias training, and Resolution 301B, supporting the establishment of a paid, national legal holiday on June 19--or Juneteenth--to commemorate the end of slavery. None of the resolutions addressed the ABA's own responsibility for establishing policies and procedures that further promote and facilitate racial injustice.

It is obvious that there is a problem. The entity responsible for regulating the entry into the profession must stop placing the task of the resolution on others and must instead address the policies it has enacted which have contributed to the lack of diversity in the profession. The path to ending the discrimination begins with the legal academy. To have a diverse profession, law schools must admit diverse students. The current standards, interpretations, and enforcement procedures prevent the diversity that is critical to addressing the pervasive inequities and injustices that are present in the system it has sworn to promote and uphold.

One solution is to allow schools, especially those that were created for the purpose of increasing representation in the profession and have been dedicated to that mission, to establish an admissions process with lower indicators. Strict adherence to the standards and interpretations should be revisited in order to allow these law schools, who have a history of educating Blacks and students of color, to enable those populations to become practicing attorneys.

At a minimum, law school attrition rates should only factor in academic attrition to determine compliance. Currently, the ABA factors in all non-transfer attrition when determining compliance. Thus, individuals that withdraw due to non-academic factors, such as personal illness, financial difficulties, and family emergencies, are unfairly included in the attrition rate. Attrition based on non-academic factors is not relevant in assessing whether the law school is admitting students who are incapable of successfully completing law school and passing the bar, and instead unfairly affect programs that enroll a significant number of non-traditional law students who are more likely to withdraw due to non-academic reasons.

A closer examination of the metrics used to assess academic performance is also needed. Any metrics that produce a discriminatory result and leads to the exclusion of minorities in law school and the profession, should be eliminated. It is no longer acceptable for the ABA to only acknowledge the problem while ignoring its own contribution and furthering prolonging the problem. Law schools must be able to attract, admit, train, and graduate students who will contribute to the diversity of the profession. Instead of policing schools, the ABA should work with them to support and pay for programs that assist students from diverse backgrounds. As Liane Jackson stated,

Whether it's women in the ranks or people of color, it's been perpetually easier to shut the gate than crack the door open to diversity. Lip service and platitudes don't make you an ally. It takes honest introspection and self-assessment to determine whether you are actively part of the problem or part of the solution.

The ABA, as the gatekeeper, must understand that “silence is complicity and inaction is collusion.” For us to benefit and improve the system, the ABA must look at its own standards and interpretations and examine what it can do to achieve the diversity it has committed to promote.

Joseph Garcia is a 2019 graduate of North Carolina Central University School of Law.