Open Letter on Single Parenting to President Bush and Vice-President Quayle, May 27, 1992 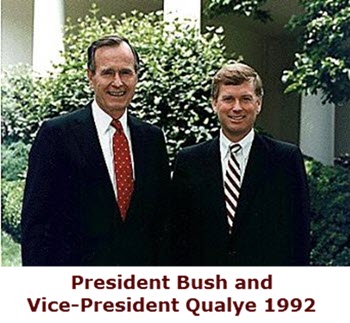 Your remarks about single parents is the last straw. For the last 10 - 15 years I have noticed an increasing tendency to blame single parents for the problems with our youth. If there is a moral deficit in families it is not confined to those families headed by single parents. To imply that single parents lack "family values" is ridiculous. As a single parent, I'm outraged and more than a little insulted.

I have worked hard to provide my sons with a stable family and I think that you should know more about the type of family you are insulting. Let me tell you a little about my background: I became pregnant with Tshaka (age 21) in 1970 my junior year in college. I was 22 years old, poor and had to apply for welfare. I myself had been raised in a foster home. If I quit school because of pregnancy I was looking at going to work as a maid or a nurse's aid. That was the best that I, an African-American without a college degree, could hope for.

In fact, I had to lie to get welfare because at the time Texas would not provide welfare payments to college students. So I lied and told them I was unemployed. I am not proud of having lied. But a welfare system which refused to encourage and reward self-sufficiency is the worst of two evils. I can remember being advised to either have an abortion, get married or quit school. I did none of those.

I can remember feeling like I was the only unmarried pregnant woman on the University of Texas at Austin campus. Perhaps, at the time, I was one of very few, since all of my friends who became pregnant either had an abortion, got married or quit school. Nevertheless, I persevered, had my son, took him to class with me, and graduated the next year from the University of Texas Nursing School.

Five years later (1976) when I became pregnant with Issa (age 14), I thought I couldn't' go through another pregnancy alone. So I married Issa's father. That's when I learned that there are situations worse than being a single parent. Officially, Charles and I were married a year and a half. However, I prefer to say in my official life story that I was never married. Since that time I have been a single parent. So, for the past twenty-two years, I raised my boys alone. I'll hold my sons up to children from a two-parent family any day. They are independent, self-reliant, honest, hard workers who have respect for themselves, respect for others and respect for GOD.

Tshaka is a junior in secondary education at the University of Dayton. He sings in Gospel Choir, Celebration! (UD's 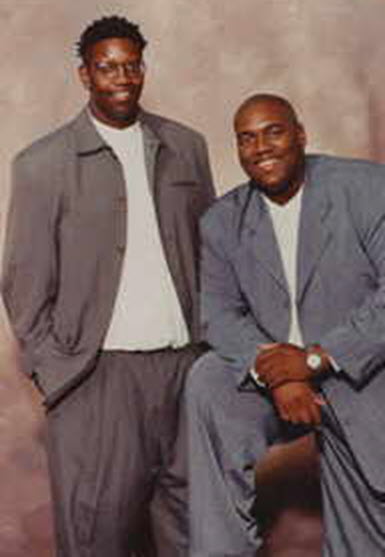 show choir). He works part-time as an assistant football and baseball coach at a suburban high school.. The high school is a white upper-middle class. This is his second year. He has worked with children since he was thirteen years old. He has a 3.0 average in school and has been accepted in the Institute for Teachers, a

program for minority undergraduate students who plan to pursue their doctorate and to teach on a secondary or college level.

[UPDATE:  2/18/06: Tshaka (right) has  a master's degree from University of Michigan, a JD/Ph.D. at the University of Pennsylvania and clerking for a federal court judge .

02/08/11: Tshaka is a law professor at FAMU Law school. He is married and his wife is a lawyer. He is the father of eight-month-old twins: A and M.

11/23/19: Tshaka teaches high school and though divorced he made the choice to stay in Florida and to have shared custody of his 10-year-old twins.]

Issa is an eighth grader. He plays in the band, plays football and baseball. He is a good student and is well-liked by both teachers and students. In fact, his teachers comment on his independence and his maturity.

[UPDATE: 2/18/06: Issa (left) graduated from the University of Dayton, is a fine arts photographer who has travel and worked in Asia, Africa, and Europe.

2/08/11: Issa is  a practicing artist having showings in Europe and AMerica.  He is doing a residence at the 510Project in Dayton and is scheduled to have a solo show at Dayton Visual Arts in 2012.

Even while raising these two fine young men, I have managed to accomplish quite a bit in my career. I completed my undergraduate degree, obtained a master's in nursing, worked 12 years as a public health nurse, completed law school, practiced 3 years in a large defense firm and I'm currently teaching at a law school. In addition, I was very active in civil affairs such as Oregon Women Lawyers, the Oregon Black Lawyers, and the Thurgood Marshall Law society. But I suppose that my accomplishments and those of my children mean nothing since we lack "family values".

I submit that it is not the structure of families that determine their success but whether the adult(s) in the family have a good education, make a decent income, have good emotional/social support for themselves and their children and have good parenting skills. Being a single parent is not the problem, it's the lack of these ingredients that is the problem.

Teenage pregnancy is a problem precisely because the pregnancy interrupts the girl's education and thus her opportunity to make a decent income. Welfare does not provide a decent income, neither does minimum wages. At best they provide only a subsistence living. In a country with such an abundance of wealth its incredible that we give many of our youth nothing more to look forward to than a third class education and a subsistence lifestyle.

Besides a decent income, many single parents lack the emotional and social support system necessary for child-rearing. Our transient society has weakened the infrastructure of many families. They do not have the aunts, uncles, mother and father around to provide support. If they are around, they themselves are struggling emotionally to survive and have little extra strength to support someone else. Many communities have not fully developed alternative support systems through their churches or through programs like Big Brothers/Big Sisters. I was fortunate to have available in my life the support systems necessary. Especially important were the male role models that were available through my church, through male teachers in elementary and secondary schools, and through community support programs. I agree that having male role models and confidants for children is very important. However, there is nothing that says that the person has to be sleeping in the mother's bed.

If you want to strengthen the family I suggest, Mr. Bush and Mr. Quayle, that you support the development and funding of programs that can provide alternative infrastructure for families. I suggest that you use whatever measures necessary to break the cycle of crime and violence in communities. I suggest that you support increased wages for teachers which would encourage the best and the brightest to return to elementary and secondary education and provide role models for children.

I have enclosed a picture of my sons. I hope that after looking at them perhaps you will rethink your ideas about "single parenting" and family values.. They are not mutually exclusive. By the way, Mr. Quayle, if you take a good look at the pictures, you won't find them marked with illegitimacy.

There are thousands of single parent families which demonstrate the same solid moral values which exist in my family and I think that you owe us an apology. Instead of criticizing those of us who chose to give birth to our children rather than to abort them, you should applaud the outstanding jobs that we are doing.