The Legacy of Slavery, Cognitive Shortcuts, and Biased News: The Mass Media's Vilification of Black Males and the Resulting "Reasonableness" of Excessive Force by Law Enforcement 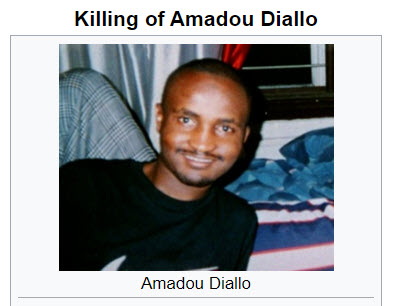 Kadiatou Diallo was thrilled to hear the excitement in her son's voice when he called her on January 31, 1999 from New York City. "I'm so happy right now, Mom! I am going to do it." "Do what?" she asked from her home in Guinea. "Enroll in college," he enthusiastically replied. She asked him if he needed her help, and he said, "No, I only need your prayers." That was the last phone call Kadiatou Diallo had with her son, Amadou.

Amadou Diallo was born on September 2, 1975 in Sinoe County, Liberia. Amadou grew up in Liberia where he attended kindergarten in Monrovia. From 1980 through 1986 he attended primary and secondary school in Lome, Togo. From 1987 through 1989, Amadou attended middle school in Gbessia, Conakry, Guinea. He was a well-rounded child who loved to read. From 1990 to 1994, he attended high school at the French International School in Bangkok, Thailand. As he grew older, his desire to go to college became of paramount importance to him. He continually encouraged his younger brothers and sister to attend college as well. He firmly believed that an education was key in the achievement of dreams.

Prior to leaving for the United States, he had not only lived in different countries with his family, but he also travelled to different countries on his own. In addition to Guinea, Liberia, Togo and Thailand, he had traveled to France, Asia, and Japan. He attended the Computer Institute in Singapore, which is an affiliate of The Cambridge University of England. He spoke five languages--Amadou was fluent in Fulani (the native language of Guinea), as well as English, French, Spanish and Thai.

In September 1996, Amadou departed for America seeking greater educational opportunities. He left behind a handwritten note for his mother that had only two lines, "The solution is U.S.A. Don't leave my brothers and sister here." Like the millions of people who embarked on this journey before him, Amadou believed in the opportunity America promised. He refused help from his parents because he wanted to make them proud and achieve success on his own--his goal was to earn a degree in computer science.

Once in New York, Amadou lived a simple life. He shared an apartment with two roommates and worked 10-12 hour days, six days a week, selling videotapes and other items from a table directly in front of a convenience store in lower Manhattan. He befriended many and always enjoyed conversations that stimulated the intellect as well as the spirit. He was an avid reader and enjoyed his books that ranged from subjects such as physics and technology to one of his favorites, a book titled, Guidelines for Dialogue Between Christians and Muslims. He was a devout Muslim who neither smoked nor drank alcohol. His uncle Mamadou told him to be careful because he heard stories of many families in Guinea who lost their sons to shootings on the streets in the United States. Amadou reassured him that the U.S. dealt with crime in an organized fashion. "'It is safe here,' said Amadou. 'I am not worried."'

In the early morning hours of February 4, 1999, after returning to his apartment in the Bronx, Amadou conversed with his roommate, Momodou Kujabi, and left the apartment. Momodou assumed Amadou was going out for something to eat, as he often did after coming home from work. Amadou, a man who stood at a mere 5 6 and weighed roughly 150 pounds, was confronted by four plain-clothes police officers while he was standing in the vestibule of his building. The confrontation ended with 41 shots fired at Amadou, 19 of which struck the 22-year-old, who was armed with a wallet.

The Chief Medical Examiner's Office determined through an autopsy that Diallo died from multiple gunshot wounds to the torso. While bullet wounds to major organs were the cause of death, what killed Amadou Diallo? Was it the impact that systemic racism perhaps had on the lens through which the police officers viewed Amadou--the systemic racism that that once outwardly, but now more covertly colors our views, our decisions, and the value we place on certain individuals? Did Amadou have knowledge of law enforcement's reliance on race to select which individuals will be subject to spontaneous investigatory activities--that racial profiling is arguably born out of the negative stereotypes most often applied to Black males, that they are more dangerous, more prone to violence, and more likely to be criminals than other members of society? Was it Amadou's ignorance of how residents of the Soundview section of the Bronx, or any area of low socio-economic status comprised of predominantly Black and brown people, were treated by law enforcement because of this American phenomenon? Did he lack the understanding that is typically gathered by Black American males early on in life, that he must consciously carry himself in a particular way so as to not appear suspicious or threatening? Was Amadou, an immigrant, completely unaware of the complexities of American society relating to his race? Was he naïve of the vilification of Black males that has been cultivated for centuries in the United States? Did Amadou not know that he "fit the description" and by virtue of the way he looked, could end up in the figurative and literal cross-hairs of law enforcement's sights?

"Americans share a common historical and cultural heritage in which racism has played and still plays a dominant role." This shared experience, the racial dimension of our history, and the American collective unconscious, results in the fact that we inevitably share many ideas, attitudes, and beliefs that attach significance to an individual's race, particularly, individuals of color. It is seemingly counterintuitive that, despite hundreds of years of exposure to racially charged societal stimuli, we oftentimes do not recognize the ways in which our cultural experience influences our beliefs and perceptions about race or--and perhaps more importantly in the context of law enforcement and the public--the occasions on which those beliefs affect peoples' actions and the centrifugal impact that results.

This Note will examine the inability or unwillingness of American society to look introspectively at how the nation's subcutaneous racism has communicated itself and continues to impart itself into areas of society-- namely our justice system--in which fair, impartial treatment fundamentally determines the quality and effectiveness of the institutions that comprise this system. Specifically, this Note will examine how these implicit feelings, which are both common and expected, manifest in the practices and actions of police officers; those with whom society has entrusted the privilege to serve and protect as well as the discretion to use force, deadly if necessary, to carry out their important objective. Because of themes within this Note and the inquiries raised therefrom, it must be noted that this piece is designed to incite an examination of human and institutional behavior using conceptual, interdisciplinary tools often unfamiliar or unembraced by those who study or practice law. This Note has a deliberately race-conscious orientation in part to dispel the notion of neutrality under the law.

Part II of this Note will provide a brief historical narrative of the policing and vilification of Blacks during slavery, as well as early laws and legal decisions that encouraged these behaviors. It will also discuss the majority's attitude in a post-slavery United States, how these attitudes bled into crucial decision-making processes during Reconstruction. Further, it will discuss how laws and policies related to policing Blacks, coupled with the way in which a newly freed people were portrayed in society, stifled their assimilation into American culture and effectively kept them outside of societal norms. Part II of this Note will also discuss the culture of American society in the 20 and 21 centuries relating to the continued media perpetuation of the "boogie man" concept and how it encourages racial profiling, as well as contemporary laws enacted to specifically target communities of color. Importantly, Part II will highlight the different ways in which systemic racism was forced to manifest itself during the emergence of its unacceptability in American society. Essentially, Part II will provide a historical analysis from the origination of this underlying problem to present day.

Part III will identify the problematic, establishment-backed schools of thought prevalent in America's justice system culture. Specifically, Part III will examine how the idea that the Black male is a threat dangerous enough to justify not only heightened policing by law enforcement, but the use of excessive force--which was created during slavery--is still prevalent in modern society and perpetuated in part by the modern news media. The identification of this problem will be illustrated through cases of police brutality and excessive force where the officers in question were indisputably the person responsible for the injury or fatality. Part III will also briefly examine statutory language and legal standards in these cases and the effect that implicit conceptions of a particular group can have on a purported race-neutral judicial system.

Part IV will discuss a proposed method to confront and remove implicit bias from the judicial aspect of the justice system and, by weaving in the themes of slavery-era tropes and the bias-driven reasoning that allows society to find excessive force against Black males reasonable, argue that the proposed test is not pragmatic in a purportedly colorblind America. Part IV will also recommend one method as a potential springboard towards race-neutral justice.

State v. Mann held that cruel and unreasonable battery on a slave by the hirer is not indictable because of the recognition of full dominance of the owner over the slave except where the exercise is forbidden by statute. men are viewed and, as this Note has illustrated, have been viewed for centuries as the profile of crime in America on virtually all fronts--from citizens' and police officers' suspicions, to the use of race in criminal profiles. The media, particularly television news, has perpetuated this profile. Television news programs are dominated by stories about crime, and the major message conveyed is that "street" crime is an extreme and imminent threat to our well-being. Politicians respond to the purported crisis by getting tough on "street crime," which includes deploying more law enforcement into concentrated areas, building more prisons, instituting more severe sentences, and federalizing many crimes.

As long as race continues to be considered the primary predictor of criminal propensity, brutality and disproportionate policing against Black males will continue unabated. Recognition that our society is not colorblind is the first mammoth hurdle that must be cleared to end this prophecy. While the cultural meaning test may be workable in, ironically, an egalitarian America, it acknowledges without addressing the systemic infiltration of race-driven conceptions of criminality into the consciousness of those expected to properly employ it. It is only through addressing and accepting the racially biased unconscious within us all, will we be able to implement an effective strategy to destroy the foundation of the system whose architects conceptualized it centuries ago and designed it to operate for centuries to come.