Financial Technology's Role in Exacerbating or Reducing the Wealth Gap 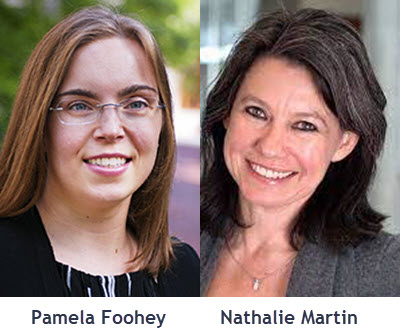 Good Girls, the popular American crime comedy-drama television series, follows the lives of three women living in Detroit, Michigan. The crime aspect of the show arises because all three women face financial crises and decide to rob a grocery store to acquire additional cash. Each woman also considers different solutions to her own compounding problems in light of their crime. Ruby Hill, a Black woman, takes out a payday loan. In Good Girls, fiction follows reality. People of color use payday loans and other fringe lending at a much higher rate than white Americans.

Reliance on high-cost credit and other nontraditional banking services is expensive. As described by two scholars at Georgetown Law's Center on Privacy & Technology, “[p]ayday loans hurt people .... [T]hese loans are for most borrowers grinding debt traps that ensnare families struggling to pay the regular costs of everyday life: rent, prescription medicine costs, the heating bill.” Writing about a workshop on sales lead generation organized by the Federal Trade Commission (“FTC”), they continue: “these and other harmful effects of payday loans were a recurring theme in panel discussions. But one issue was never raised in any of the discussions--the fact that payday loans do not hurt equally.”

These observations reflect another reality. Although scholars continue to write about the “debt trap” of high-cost credit, their discussions of these products often lack a robust linkage of the products' harms to larger issues of income and wealth inequality. Similarly, though research continues to draw attention to the racial and ethnic disparities in student loan debt repayment, redlining and subprime home loans, and other credit and banking products, each discussion often pays only passing attention to its place within extensive and long-standing issues of wealth accumulation in America.

Scholars and researchers cannot be faulted for this. Every link is part of a larger chain of discrimination that prevents people of color from converting their income into wealth, thereby deepening the wealth gap. Each link helps to explain how expensive credit and unequal access to banking services exacerbate the wealth gap. Each link also is needed to consider how innovations in banking and financial services, such as in the financial technology (“fintech”) area, may either remedy or exacerbate the wealth gap. Indeed, the details about each link have allowed policy makers to promote in-depth proposals designed to tackle income inequality and the wealth gap. The existence of multiple proposals creates an opportune moment to consider how to reverse unequal access to banking and lending services (that is, debt inequality), particularly in light of new innovations, which are largely marketed to Americans at the bottom of the wealth spectrum.

This Article connects those links in the wealth gap chain to propose key principles for the consumer banking and lending sector to follow in order to ameliorate the debt inequality that feeds wealth inequality. Part II sets the stage for our focus on unequal access to credit and banking services. It first examines the history of America's income inequality. The income gap has grown exponentially over recent decades, with both the middle class and working poor losing ground in terms of real wages, with the most loss accruing to racial and ethnic minorities.

Part II then links income inequality to America's persistent wealth gap. The United States now has more income and wealth inequality than any other developed country--and more than during the 1920s, just before the Great Depression. This gap has redistributed wealth from the poor and middle classes to the rich. To put this in perspective, the three wealthiest people in America have more than the bottom half of Americans, all 160 million combined. The wealth gap between white Americans and racial and ethnic minorities likewise has not diminished over past decades, despite the passage of anti-discrimination laws during the same period.

Income inequality and wealth building also connect with debt inequality. The inability of some Americans, particularly minorities, to access credit and banking services at a reasonable cost is a key reason why these households cannot transform their income into wealth. Parts III and IV explain why this remains the case by focusing on how debt inequality may aid wealth redistribution and exacerbate the wealth gap.

Part III reviews the rise of the use of debt in America. It focuses on the demographics of subprime home mortgages, student loans, payday loans, and other high-cost lending. Disparate use of these products by communities of color chips away at savings, prevents wealth accumulation, and exacerbates long-term economic losses across generations. This discussion also notes how government policies have contributed to this wealth redistribution, with an eye to understanding how regulation has failed in the past.

Part IV showcases a few “advances” in banking and credit services that rely on innovations in fintech: payroll cards, early wage access programs, and automobile loans, such as Uber's short-lived car financing program that ended after a $20 million settlement with the FTC. By delineating these products' mechanics, the history of their emergence, and the laws (or lack thereof) surrounding them, this Part draws out the basics of how regulation of banking and credit services can serve as a part of solutions to effectively tackle the wealth gap.

Having mapped a network among income inequality, the wealth gap, and discrimination in access to banking and credit services, Part V draws lessons from fintech products to set forth our four tenets for reducing debt inequality as an input to wealth inequality: providing access, delivering choice, accounting for discrimination across its variants, and creating a public option. In this discussion, we again focus on tackling racial and ethnic disparities in banking and credit.

The COVID-19 pandemic intensified the imperative to understand and combat debt inequality. Within in a couple months of the novel coronavirus's emergence, tens of millions of Americans lost their jobs, saw their hours cut, or were called on to perform essential tasks. People of color experienced job loss at higher rates, while also being more likely to be deemed essential workers, forcing them to put their lives on the line. Reports detailing how many people, and particularly Black and Latinx households, could not survive a few weeks or months without monetary help brought America's stark disparity in income and savings into focus. For instance, when Congress enacted the CARES Act, questions about how “relief rebate” payments would be delivered to the millions of unbanked Americans quickly emerged, highlighting how disparate access to electronic payment and banking systems exacerbates race and class differences. Minorities also worried more about debt collection if they defaulted on existing obligations, with coronavirus being termed a “new housing crisis for communities of color.”

As Lani Guiner and Gerald Torres wrote, race “is like a miner's canary.” “Miner's canary” describes how miners would carry canaries, which are more susceptible to toxic gases, into mines with them. If the canary collapsed, miners knew to leave. Focusing on Black, Latinx, and other minority Americans, allows for a detailed and sustained discussion of racial and ethnic disparities in access to debt, income inequality, and ability to build wealth. The distress of these households, as this Article sets forth, is, as Guiner and Torrres wrote, “the first sign of danger that threaten us all.” The exacerbation of income and wealth inequalities among communities of color in recent decades signals a potential coming economic and social collapse in the United States, potentially hastened by the economic fallout from the pandemic. This Article concludes by returning to the “miner's canary” metaphor to emphasize the gravity of adequately accounting for debt inequality's place in answering the income and wealth inequality conundrum.

For the past several decades, America has been in the midst of the greatest redistribution of wealth from the poor to the rich in its history. As outstanding debt has ballooned in reaction, debt inequality has played an increasingly important role in exacerbating the wealth distribution. The gap between the haves and have nots in America is so drastic that wealth and income inequality threaten to undermine the American economy and society, as recognized by some of the wealthiest Americans and by some policy makers.

This recognition brings a pivotal moment in the United States. This moment was evident before the COVID-19 pandemic, but now it is even more palpable in light of the depth and gravity of America's racial and ethnic economic inequality that the ensuing economic and health crisis has exposed. America may well be at the brink of deciding how to try to reverse the wealth gap, which makes this the time to address the interrelated factors that have fed the United States' widening wealth gap. Each of these factors is a link in the chain of events and struggles that prevent American households from building wealth. The need to take out credit at high interest rates and fees, and the need to pay for access to one's own money--that is, debt inequality--is one of these key factors. Debt inequality can result in a transfer of money from lower-income households (the have nots) to wealthier households (the already haves). Debt inequality thereby exacerbates the effects of income inequality and feeds the wealth gap.

Communities of color have been hit the hardest by these links in the chain that generate the wealth gap. Focusing on these communities allows for a robust assessment of the ways in which debt inequality has fed and may continue to feed the wealth gap. Both in the past and continuing into the present, communities of color face discrimination in home mortgages, student loans, alternative financial services, and access to mainstream banks. In recent years, fintech banking and lending companies have offered communities of color (and other lower-income Americans) new “advances” in accessing money and credit. A review of these advances shows that they likely replicate many long-standing banking and credit problems that foster debt inequality, while also raising new concerns about people's relationship with their employers and the use of big data.

That these new products are marketed as solutions to the problems that people previously have faced with banking and lending institutions only heightens the need for a comprehensive plan to address debt inequality. Otherwise, debt inequality will continue to feed wealth inequality, impeding other efforts to help communities of color and lower-income Americans build their wealth. The public discourse fostered by the recognition of the economic and social precipice America is teetering on has shone much-needed light on the most important tenets in tackling debt inequality. Now is the time to move forward with a broad set of plans for reforming Americans' access to banking and lending services necessary to close the wealth gap.