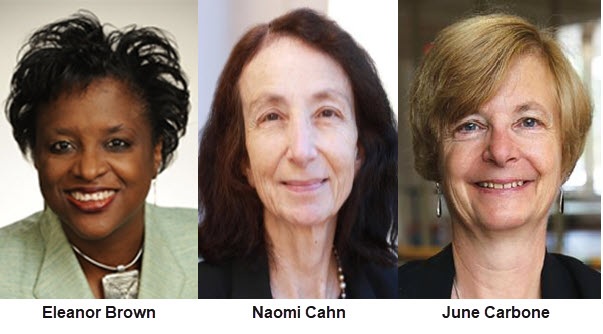 Do fertility rates converging by class reframe the debate about public support for parents and family care?

The debate about support for child-rearing in the United States has long foundered on the race and class divide. Since the Industrial Revolution, fertility has diverged by class with the well-off choosing to have fewer children while the working class has continued to have larger families.

The moment for family law convergence is at hand--and the reason is a remarkable convergence in fertility rates. As this Essay shows, the fertility discourse of the last half century deals with the profound effects that come from the transformation of the economy and the place of modern families within it. Discussions of race and class have been an important--and, often, pernicious--part of a transformation in family values, as the upper-middle-class efforts to channel ever greater investment into children have increased economic inequality and contributed to racial, ideological, and gender division. We see the convergence in fertility rates as an indication that, at a practical level, a much larger part of the country is embracing the new family ethos we have labeled “blue”--that is, postponement in childbearing that facilitates greater investment in both men's and women's earning capacity. This ethos, at its core, accepts women's critical role as wage earners and calls attention to the fact that societies cannot adequately support child-rearing without remaking the public infrastructure that supports family planning and care. Cultural values in the new regime reflect not just “family values” but also the larger demographic and economic trends that are remaking our society.

The modern story of family divergence--and of the “welfare queen” stereotype with the 1965 Moynihan Report, which described the increasing Black nonmarital birth rate as the result of a “tangle of pathology.” Later sociologists, with much less fanfare, described the results as the product of diverging fertility rates: married African Americans embraced contraception earlier than unmarried women, contributing to a change in the population having children.

A second divergence underlies differences between those who support immigration and those who do not, based in part on the latter's perception that white people will soon be a minority within the United States. Underlying this perception is not just increased immigration, but high birth rates among Latinx mothers. Latinx immigrants to the United States in fact have had higher fertility rates than Americans (including Latinx Americans) born in the United States. Their birth rates have also been higher than the women in their home countries who did not emigrate. By 2019, white people constituted less than 50 percent of children under the age of fifteen in the United States. In addition, while 14 percent of the U.S. population was foreign-born in 2017, 23 percent of all births were to immigrant women. The high birth rates among Latinx mothers were a principal reason why overall U.S. population growth remained above replacement (that is, the U.S. fertility rate remained above 2.1 children for every woman of childbearing age), making the United States an outlier among developed countries.

A third divergence involves class-based change in family formation. Demographers described a “second demographic transition” led by the developed world, characterized by falling overall fertility, a greater variety of household living arrangements, and a disconnection between marriage and reproduction. In the United States, conservative critics link these patterns to moral decay. Underlying the class-based divergences was an increased divergence in fertility timing. The average age of marriage and first birth for college graduates steadily increased. A later age of marriage lowered divorce rates, partly because of couples' greater maturity and partly because of assortative mating--those who waited longer to marry invested more in their careers and became more likely to marry similarly successful partners. During the same period, the average age of first birth for women who did not attend college remained the same. These changing fertility patterns contributed to a class divide that, over time, also became a cultural divide. The most economically prosperous and liberal areas of the country increasingly had lower overall fertility, less divorce, fewer teen births, and later ages of family formation than less prosperous (and more religious and conservative) areas of the country. The legal rift that followed has been described as a clash between “red families” and “blue families.”

These differences in fertility patterns and management are now shrinking. Beginning with the Great Recession in 2008, fertility rates began to drop, driven to a large degree by changes in fertility for younger, poorer, and minority women. They fell across the board for single, non-cohabiting women of all races. Rates have dropped dramatically for teens of all races, particularly Latinx teenagers. And the unintended pregnancy rates of women below the poverty line, which had increased substantially from the mid-nineties to the mid-aughts, dropped. In recent decades, women with a college degree or higher have seen their fertility rates rise. As a result, looking at completed fertility--that is, the total number of children born to each woman by the age of forty-four--educational differences have shrunk. These fertility shifts persisted through the post-2008 recovery and seem to have been exacerbated during the pandemic, setting the stage for a greater convergence in family patterns across race, region, and immigration status. They also have laid the foundation for a new era of family law.

Family support from adoption of the Aid to Dependent Children program in the 1930s to the abolition of “welfare as we know it” in 1996 has been integral to a debate about “'irresponsible’ reproduction.” “Family caps,” policies that deny benefits for additional children born to mothers on public assistance, were designed to remove what supporters saw as the “perverse incentive for welfare mothers to have more babies in order to get money.” In contrast, the adoption of European family allowances were often tied to pronatalist policies designed at least in part to encourage greater fertility. Converging (and declining) fertility rates may increase political support for investing more in all families; the role of children in our society has changed from matters of individual family values to the foundation for liberal democracies.

The other change is among well-educated women, with Black women leading the way. Black married women have had substantially lower fertility rates than white married women since the 1980s. And the birth rates for unmarried Black women dropped sharply after 1969, while the birth rates for unmarried white women increased, dramatically reducing the difference between the two.

Both Black and white college graduate nonmarital birth rates are increasing. In recent years, white college graduate birth rates have also increased, both within and outside of marriage. These changes may reflect both changing economic conditions and women's attitudes toward their biological clocks. The willingness to have children, alone if necessary, has become a sign of success rather than a sign of economic disadvantage.

This Essay examines how the convergence of fertility trends is likely to reset the debate about state support for child-rearing, against the background of an ongoing national conversation on supporting children and families, prompted most recently by the COVID-19 pandemic. First, it reviews how past failures to embrace such polices often foundered on diverging fertility patterns and how this time may be different. Second, it considers how the changing patterns among well-educated women may affect traditional family law doctrines underlying custody and support. Third, it explores the relationship between immigration, xenophobic backlash, and fertility rates, considering whether these factors may change with converging fertility rates. Finally, it considers the implications of the foregoing for family law.

The information age is effecting a transformation of the family on a scale comparable to the changes associated with industrialization. Scholars have mapped the global reductions in fertility, a leading indicator of the changes, but have not to date agreed on the causes or the broader societal implications. Instead, family scholars have posited that declining fertility reflects a cultural shift toward “self-actualization” and that fertility falls because of “workism.” Yet, the critics attributing declining fertility to these causes have failed to explain the increasing convergence in fertility rates or their interaction with the economic changes.

The fertility declines in the early years of both the first and second demographic transitions were associated with greater investment in children, as the upper middle classes of the nineteenth and twentieth centuries dealt with economic changes by adopting new family strategies that both limited the number of children and gave their children advantages in more competitive economies. These strategies, which were beyond the reach of the working class, produced greater inequality as greater investment in children increased adult opportunities. Reductions in fertility in both eras were associated with changes in adult roles that contributed to wealth acquisition, more intensive parental engagement with children, more effective reproductive control, greater educational opportunities from early childhood onward, and greater assistance in gaining the experience, training, and retraining that make adults “employable.”

Family support needs to be rebuilt on the terms of the new economy, an economy that depends on women's--as well as men's--market labor and that requires a new infrastructure to extend the benefits of the new system to all families. This new system rests on a series of elements. First, family planning is an imperative. It is a system that is most effective when contraceptive information and access is systematically made available to teens before they become sexually active. The Affordable Care Act has helped address contraceptive affordability; universal access and encouragement is the next step, and that step requires stronger protection from intimate partner violence.

Second, the nuclear family is no longer a necessary or sufficient measure to protect childhood well-being. Parents, acting on their own, cannot solve the problem of economic--and childhood--inequality.

Third, a critical period for investment is early childhood. Well-off parents have been able to realize the advantages of the SDT by intensive cultivation of their children, which requires increased parenting in the first year of life, affordable high-quality early childhood care, and universal pre-K. Universal early childhood education is today's equivalent of free secondary education in the nineteenth century.

Fourth, support for the transition to adulthood requires rethinking the pipelines to employment opportunities. Adults who finish school can no longer depend on completing their educations and walking into jobs that provide lifetime tenure. Instead, “employability” requires the ability to gain new skills, return to school, and if necessary, move to new locations.

Fifth, providing for the elderly. Elder care, like childcare, remains part of a gendered assignment of family responsibilities. Today, it is increasingly commercialized, dependent on immigrant caretakers, and unaffordable for many. Greater systematic provision of care is needed.

Taken together, these and other measures require providing a new family infrastructure built on the new model that we have termed “blue” and that others have called the SDT. It is important to recognize that this model is not just about the changing fertility rates--nor is it solely caused by, or concerned with, the changing roles of women--though those changes certainly are a necessary part of gender justice. Instead, it is about a fundamental change in the economic organization of society, which has eliminated many well-paid routine jobs and increased the rewards, both individual and societal, for greater human capital investment. These changes, by increasing the demand and compensation for many services women have traditionally performed, have increased the opportunity costs involved in providing childcare and thus contribute to falling fertility. The only solution that can extend the benefits of the new system to a larger portion of society requires rethinking the infrastructure underlying investment in children. The future of our society depends on it.