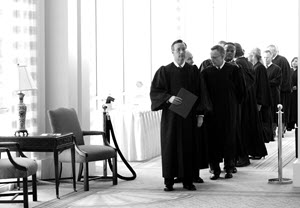 Imagine you are an immigration judge, and you are just assigned a case. The respondent is a foreign national from Honduras, and this is her first hearing. She speaks Spanish, so you have to use an interpreter--not a problem; you are used to this. Included in the advisal you give pro se respondents, you tell her that she can hire an attorney at no cost to the government. She asks for time to hire an attorney. Understandingly, you give her a list of approved pro bono agencies the court staff prepared and a new hearing date in a few months.

At her next hearing, she tells you that she has called all of the numbers on the list, but no one will return her calls. She has not prepared any applications, nor does she know what, if any, forms of relief from removal she qualifies for. You are irritated because it has been several months with little progress on this case. Nevertheless, you are having a good day and tell her that she has one more chance to come back with an attorney. You warn her that you will proceed next time whether or not she has representation.

A few months later, she returns with an attorney she hired. Well, she comes in with his associate. The associate tells your clerk that he has two other cases with different judges on different floors and asks to be called next. He reaches down and picks up three blank carbon-copy pleadings forms he is to submit when his client's name is called. He takes a seat in your very crowded gallery and begins to fill out the forms. After being called and entering his appearance, he waives a formal reading of the Notice to Appear. He states that he will explain the charges of removability to his client later and concedes them. He also asks for “attorney prep time,” as he does not have any applications for relief prepared for today's hearing. Frustrated that this case has made little progress, you begrudgingly agree to a short continuance.

The next few hearings are like pulling teeth. You learn that the respondent intends to seek asylum based on the harm she experienced in Honduras. You remind counsel that, apart from an application form, he must submit his client's written statement, criminal background checks, and corroborating evidence.

Compliance with these requests seems simple, and yet the record remains incomplete. At the next hearing, the associate will tell you that the fingerprinting was requested a few days before the hearing and an appointment has not been scheduled. The next time, the respondent's written statement is provided in Spanish but has not been translated for you. Excuses come in all shapes and colors: we have moved offices; the other associate didn't write it down; the client didn't go. Eventually, you have just enough in your file to schedule a hearing to hear the merits of the asylum claim.

When you are back on the record, you proceed to testimony. Counsel does not need to do much here because the respondent is ready to tell you her story. She tells you about the physical and sexual abuse she experienced at the hands of local gang members in her home village. She gives you the parts of her story that impacted her most and led her to flee Honduras. She is crying by the end of it and is pleading for help. Counsel ends his questioning.

Once the testimony is taken, you ask the attorney again if all of the documentation for this case is submitted. He says yes. You flip through the record and note that only a statement from the respondent, the application form, and some internet printouts regarding general violence in Honduras are submitted. You ask for a closing statement. He answers that he is submitting on the record. You ask him to articulate the protected ground. He says, “Women who have suffered gang violence.” You instantly experience an overwhelming feeling--“Are you kidding me?” You know this cannot work. You know that case law prohibits this articulation, and you must deny her application. You know that if counsel had articulated something better, this respondent might have a fighting chance.

The experiences of this hypothetical judge are not uncommon. In many instances, immigration attorneys rely on their years of experience and practice to allow them to coast through cases. Immigrants are denied relief because attorneys fail to provide adequate representation. While it is true that immigration lawyers have a hard job, particularly during and in the aftermath of the Trump Administration, and all denials in immigration cases cannot be chalked up to “bad lawyering,” some immigration lawyers are out there taking advantage of--and money from--unfortunate immigrants who do not know better.

What is worse is that the hypothetical judge is unable to sanction this attorney for his failure to advocate for his client. This attorney can now go on and provide the same kind of inadequate representation to the next person and the one after. In order to protect some of the most vulnerable individuals in our country, we must vest a power of contempt in immigration judges to hold underperforming attorneys accountable and prevent future generations of immigrants from suffering the same fate as our hypothetical respondent.

There are many problems for immigrants in the United States. The Trump Administration targeted different areas of immigration law and limited protections available under DACA, Asylum, and Temporary Protected Status, among others. Many passionate attorneys continue to fight back to ensure that fundamental constitutional rights are protected and seek to build a more humane approach to immigration law. At least that is what we know about the appellate level.

On the ground level, immigrants are not necessarily always provided the same caliber of lawyering. Immigration judges can speak to the many unprepared attorneys that appear in their courtrooms and the underdeveloped cases they are forced to rule on. Unfortunately, the immigration private bar contains many attorneys providing subpar representation and are effectively “getting away with it” because the immigration judges supervising these attorneys are unable to sanction them for their inadequacies. Future generations of immigrants suffer the consequences of this.

Now I recognize that some generalizations are being made. Not every private bar immigration attorney is abusing the system and exploiting immigrants. There are many passionate advocates who bury their heart and souls into their direct service immigration cases despite being slapped time and time again by a harsh administration devoted to promoting a racist and elitist immigration agenda. This call for reform is not directed at or motivated by them.

Nonetheless, this call for reform of the rules governing attorney competence and diligence by providing more punitive options to immigration judges arises due to an unfortunate sect of the private bar getting away with providing low quality service to immigrants. The quality of lawyering should not be so disparate that immigrants are essentially playing Russian Roulette when hiring a lawyer. The present safeguards are insufficient.