Re-defining Race: Addressing the Consequences of the Law's Failure to Define Race 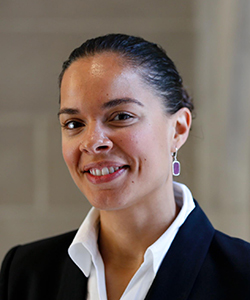 Imagine a person for whom the following things are true. This person is often asked, "What are you?" and is faced with many guesses as to the answer: mixed race, Indian, Puerto Rican, Dominican, Black, White with a tan. It is not uncommon for others to approach this person with questions in multiple languages. This person would say that she has a White mother and a Black father. This person has a diverse social network, and at different times can be seen associating with groups that are predominantly White, predominantly Black, or racially mixed. This person self-identifies as multiracial, as Black, and as White, depending on the situation, the context, or perhaps the layout of the particular form asking the question. Now imagine that you were asked to identify the race of this person. Which of the available pieces of information, assuming you had access to all described above, would you rely on? One could make a case for the dominance or superiority of any one piece of information, but it would also be difficult to argue that reliance on any of the others was objectively wrong. While this hypothetical person could be considered the most extreme version of racial ambiguity, this person's ambiguity highlights the variety of ways we think about racial identity and cues to racial group membership. Depending on which piece of information someone has access to or prefers to base racial categorizations on, as well as the particular manifestation of the cue in the moment, different perceivers/categorizers may come to different conclusions about the racial identity of the above-described person.

Like people in everyday life, the law also pervasively categorizes people by race and has done so for centuries, yet if we asked Chief Justice Roberts, for example, about how to identify the above hypothetical person, he would be just as confused. The pervasive need to categorize creates discomfort among many, including jurists like Chief Justice Roberts, particularly when they subscribe to a colorblind ideal. Thus, Roberts, who invokes a colorblind society in arguing that we must stop discrimination on the basis of race by refusing to see racial categories or identities, still muses about what it means to be Hispanic in Fisher v. University of Texas, even though the rumination on the meaning of race unsurprisingly found no place in the final decision of that case.

Despite the Court's relative silence on the meaning and construction of race, the law relies on conceptions of race to sort out a wide range of conflicts. For example, imagine the above hypothetical person is a plaintiff in a discrimination case. How do (or should) courts go about making a determination about which aspects of this person's identity are relevant to making a determination about whether something has occurred because of this person's race? In this example, in the absence of guidance from discrimination laws themselves about what is meant by race, the answer is unclear. And the answer is not only unclear now, since legal history is filled with numerous stories about individuals living at the boundaries of racial categories and the law's clumsy attempts to reconcile their complex identities, particularly in light of legal definitions of race that were hard to apply in practice, inconsistent, and/or non-existent. In this particular type of discrimination case, racial identities most often pass without dispute or reflection. But for a growing number of individuals, those that exist at the margins of existing racial categories, their protection against racial discrimination may not be guaranteed in light of the law's internal discomfort with confronting the complex and ambiguous nature of the legal construction of race. Therefore, this Article discusses both the cognitive and legal origins of race and the implications of race as a concept that is multiply-determined (by multiple racial cues and definitions) at a time when the law is generally hesitant to engage in definitional discussions of race even in areas of race-conscious law.

"[L]aw provides the raw materials through which the mechanisms of social categorization act." In other words, the law has helped shape race, and it has also made race matter. Not only does the law play the role of creator and maintainer of social understandings about race, among other things, it also reflects existing psychological and social realities back to society. The law influences and reflects how we experience and define social categories like race, and it is also being shaped by the psychological underpinnings of social categorization processes. Understanding the reality of this bidirectional relationship is the necessary starting point for any discussion about the relationship between legal and psychological conceptions of race. Drawing on social psychological research into how race as a concept is psychologically constructed, this Article attempts to provide a framework for better defining race as a legal construct. This highlights both the role of law in defining race and the implications of the law's current approach to racial definition for legal outcomes and society's psychological experiences of race.

Race is a loaded and ubiquitous word, social category, and concept in American culture. Everyday interactions, academic and scientific research, law and politics, and popular media are regular domains for its discussion, yet the discussion in any domain rarely begins with an understanding of what "race" is perceived to be or what it represents in any precise terms. A dictionary definition of race says it is "[e]ach of the major divisions of humankind, having distinct physical characteristics." This definition suggests that race is defined by physical characteristics, but other definitions suggest that race is evident from ancestry or descent (e.g., race is a "group of people descended from a common ancestor" Taken together, these definitions allude to the biological roots of race, evident either through biologically-determined physical attributes or ancestry. As a social category and concept, though, there must be elements of social construction. Robin D. G. Kelley said: "Race [i]s never just a matter of how you look, it's about how people assign meaning to how you look." This quote succinctly suggests that race is about biology to the extent that people assign meaning to certain biologically-determined attributes. This perspective highlights a nuanced understanding often lost in discussions about whether race is biologically-determined or socially-constructed.

The lack of discussion about what race is (rather than just what race leads to) leaves everyone to operate on the basis of their own perspectives and assumptions about race, whether that is a biological, social construction, or other view. Most people seem to come to discussions of race assuming that everyone else has a similar understanding of how to define race and how to apply it to individuals and groups. For example, even in an assumed simple racial categorization situation, the presumption is that everyone knows who is Black and who is White, for example, even with no prior discussion of what it means to be Black or be White. More specifically, most people assume that everyone will agree on who belongs in which category and which characteristics make individuals members of the category. As hinted at above, even a simple disagreement over whether race is biologically-determined or socially-constructed may lead people to differ in making seemingly simple racial categorizations because they are using different information. In addition, all of the discussion thus far assumes that there are, in fact, distinct lines to be drawn even if they are drawn on the basis of different information. This assumption is further tested by the ever-increasing population of multiracial people, which blurs the lines between racial groups, however they are constructed, rather than simply moving them around.

From lived experience, we know that perceptions of racial distinctions are associated not only with appearance and ancestry, but also social behaviors like clothing and hairstyle selection and manner of speaking, as well as class markers like education and income. We also know that in lay discussions of race, the more someone conforms to the prototype of a particular race on multiple dimensions, the more likely they are to be perceived as representative of the racial group in question. For example, someone with more Afrocentric facial features, Black ancestry, stereotypically Black clothing and manner of speaking, little education, and low income is likely to be considered "more" Black than someone with fewer of these characteristics. The seemingly additive nature of these cues suggests that race is not based only on "obvious" biologically-based cues such as appearance and ancestry, but that other cues also affect perceptions of race. Considering the ways lay people talk about race raises questions about what types of information about a person serve as cues to race, how these different types of information might be prioritized relative to each other, and how they may interact to affect racial categorization.

These examples indicate that race is not simply made up of one piece of information or based on one theory of origin. Instead, race can be defined in accordance with multiple theories about its origins (biological and/or social) as well as on the basis of multiple cues (ancestry, appearance, self-identification, etc.). Not surprisingly, these distinctions between theories of race and the multiple cues to race that we observe in everyday life also show up in the law. The same debates about biological determinism versus social construction and the appropriate cues for racial categorization play out in legal discourse and individual cases. Unlike day-to-day conversation, which does not purport to offer clear and efficient rules for dealing with social issues, the law aims to provide clear and efficient means for interpreting concepts relevant to law and policy and guiding people's behavior in ways that conform to the ideals set out in law. For this reason, it is important that the law take seriously the statements it makes, explicitly and implicitly, with regard to these debates about racial definitions, for the law is a powerful influencer of our understandings of social concepts, including race.

The law's failure to define race more clearly, perhaps due to the discomfort these efforts can engender, results in omitted cases and remedial gaps. And Chief Justice Roberts's struggle with the definition of race in Fisher I mirrors a larger discomfort in the law. This Article, then, examines how the law's racial definitions (or lack thereof) shape understandings of race as a psychologically and socially important category through discussion of relevant psychological research on the colorblind ideal and racial categorization processes, as well as an illustration of the issues caused by contemporary failures of law to define race even in race-conscious domains. It calls attention to the need for definitions of race in law and proposes that these definitions be tailored to the domain of the relevant law or policy, tied to the goals of the law (and its reasons for implicating race), and cognizant of relevant evidence about how racial perception and categorization processes operate.

Part I briefly discusses the historical and contemporary approaches to the colorblind ideal, including a short survey of the psychological research demonstrating the effects of colorblindness on racial attitudes and intergroup relations. Part I also discusses how the colorblind ideal has possibly led to the law's hesitance to define race by encouraging a view that talking about or acknowledging race is problematic in and of itself.

Part III examines the implications of failing to define race through examination of an ongoing struggle in Title VII anti-discrimination law as highlighted by plaintiffs at the boundaries of racial categories who find themselves without protection against discrimination due to judicial disputes about how to interpret Title VII's use and meaning of race as a category.

Part IV discusses the social cognitive origins of race as illustrated through psychological and social science research, offering this evidence as a foundation for new legal definitions of race.

Part V concludes with the normative implications of refusals to define race and calls for more goal-driven, intentional uses and definitions of race throughout the law.