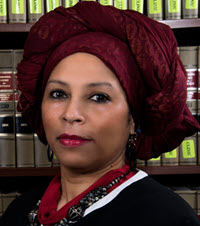 “Good morning, Your Honor, AA, here on behalf of the United States government.” AA recounted her proudest moment: appearing in federal district court as an attorney for the Department of Justice (DOJ) in a religious accommodation case under Title VII of the Civil Rights Act of 1964. There she stood, an Ivy League graduate and the granddaughter of sharecroppers. She appeared before the court as an African-American Muslim woman in hijab representing the government to uphold the constitutional rights of another Muslim woman. The complainant, Safoorah Khan, was employed as a teacher in a small Illinois school district and had requested a religious accommodation to make the annual Islamic pilgrimage to Mecca (hajj). The school district denied Ms. Khan's request.

Although the employer raised economic hardship as its legal defense, trends suggest that the school district may have denied Khan's request because her secular practices, in its view, did not align with her claim that she had a religious obligation to make hajj. AA successfully settled Khan's case against her employer and secured $75,000 for Khan in lost wages. I argue that because Khan did not perform her religion as the employer expected, such as by wearing hijab, the employer challenged the sincerity of her religious belief. Specifically, I argue that Khan experienced the effects of what I refer to as inverted masking when the school district denied her request. In the inverted masking paradigm, employers are more prone to challenge employees' religious accommodation requests when the employee is inconsistent in religious practices or fails to perform a religious identity as the employer would expect. An array of large-scale employment litigation over discrimination against specifically Muslim employees provides evidence of the inverted masking paradigm in action.

Muslims, especially Muslim women, face special difficulties in a post-Trump v. Hawaii America. Since the election of Donald Trump, assaults against Muslims are higher even than they were immediately after the September 11, 2001, attacks, and 50 percent of Muslims have experienced discrimination. Donald Trump has perpetuated negative stereotypes about Muslim women, and some argue that Muslim women are particularly susceptible to hate crimes because of the intersection of their gender and Muslim identities.

As a safeguard against mounting employment discrimination, rising anti-Islamic sentiments, and new anti-Islamic policies in the United States, Muslims increasingly engage in the tradition of masking their identity. On airplanes, many Muslims hesitate to speak Arabic or to carry books on the Middle East, for fear doing so might trigger the Transportation Security Administration (TSA) to perform extra screenings or prompt airline personnel to remove them from the plane for additional vetting. Some Muslim women stop wearing their headscarves (hijab) by choice, while others stop as a disguise mechanism. Undoubtedly, wearing hijab or the veil has become a visible signal of defiance to assimilation, and their involuntary removal an attempt to mask aspects of an outsider religious identity.

In his seminal article Covering, Professor Kenji Yoshino analyzed the covering of identity in the context of race, sexual orientation, and gender. He also questioned the benefits of assimilation for those who experience identity- based discrimination. Meanwhile, other scholars, particularly Sara Ahmed, Sahar Aziz, and Khaled Beydoun, have examined assimilation and specifically Muslim identity markers, including what it means to “act[] Muslim.” I build upon and link these two strains of scholarship by introducing the new theoretical framework of inverted masking.

Inverted masking is a legal consequence of masking identity, whether through covering, passing, or converting. Inverted masking's legal ramifications emerge when a group masks or misperforms its identity to shield against discrimination. While most attempts at masking are protective, inverted masking creates legal barriers when claimants attempt to challenge identity-based discrimination. I argue that employees, particularly Muslims, who mask their religious identity or fail to perform their religious identity as employers expect are more likely to have employers deny their religious accommodation requests under Title VII of the Civil Rights Act of 1964. The scant judicial record suggests that an employer is more likely to grant a religious accommodation if the request aligns with their expectations of the religion and the claimant is consistent with her religious practices.

Significantly, Title VII provides that an employer may not “discriminate against any individual with respect to h[er] compensation, terms, conditions, or privileges of employment” because of her religion. The term “religion” is broadly defined. The Supreme Court has interpreted religion to create an affirmative duty on employers to accommodate an employee or applicant's sincerely held religious beliefs unless it creates an undue hardship on the employer's business. Yet, it is this broad definition of religion, which in essence amounts to no definition, that has increasingly led employers to scrutinize the sincerity of an employee's beliefs. The trend suggests that employers are assessing claimants' religiosity and consistent application of religious doctrine.

Since the framing of identity narratives shape policies and judicial decisions, I examine the different theories of what makes identity and which theory American law more closely embraces in Part I of this Article. The rest of Part I focuses on the correlation between ascribed gender identities and the legal barriers associated with binary classifications of gender, race, and religion. Policies that align with the binaries of gender (male/female), race (white/non-white), and religion (Christian/non-Christian) tend to conflict with each other when nondominant identities converge in individuals--particularly African-American Muslim women.

Part II surveys forms of identity masking. This survey includes Muslims who mask to assimilate into society and escape potential discrimination. This Part provides additional background for the inverted masking thesis. This background includes contemporary examples of legislated masking, a paradigm in which individuals mask their identity to benefit from fundamental civil rights in employment, military service, and religious practices. Part II also discusses legislation that requires Muslim women to remove visible symbols of religious identity, such as the hijab and other forms of veiling.

It is difficult to believe that which we cannot see. Yet faith is just that-- belief in the unseen. Identity is also often complicated, multilayered, and invisible to employers. It is the coerced covering of identity--our ethnicity, religion, and culture--that Title VII and other anti-discrimination laws seek to protect, a protection grounded in the belief that the American fabric is woven with multiple threads.

Well-intentioned employers must overcome identity stereotypes to recognize that religiosity is as diverse as societal fiber. Even if courts do not want to measure religiosity, society and employers do. And Muslim women are acutely aware of the need to mask religious identity to make others feel comfortable. Intracommunity and intercommunity racism, gender inequity, Islamophobia, and binary identity markers have pushed Muslim women to the margins.

Thus, when employers inappropriately use identity markers as a barometer to assess religious sincerity in the Title VII framework, they should remember Billie Holiday's words: “If I go to church on Sunday / then cabaret all day Monday / ain't nobody's business if I do.”

Professor of Law, University of the District of Columbia David A. Clarke School of Law.