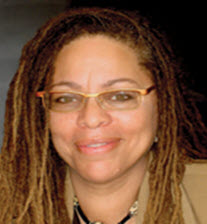 In the 1930s, some years after my mother's family became part of the great river of Black migration that flowed north, my Mississippi-born grandmother was confronted with the harsh matter of economic survival for herself and her two daughters. Having separated from my grandfather, who himself was trapped on the fringes of economic marginality, she took one long hard look at her choices and presented herself for employment at a major retail store in Chicago's central business district. This decision would have been unremarkable for a white woman in similar circumstances, but for my grandmother, it was an act of both great daring and self-denial, for in so doing she was presenting herself as a white woman. In the parlance of racist America, she was “passing.”

Her fair skin, straight hair, and aquiline features had not spared her from the life of sharecropping into which she had been born in anywhere/nowhere, Mississippi - the outskirts of Yazoo City. But in the burgeoning landscape of urban America, anonymity was possible for a Black person with “white” features. She was transgressing boundaries, crossing borders, spinning on margins, traveling between dualities of Manichean space, rigidly bifurcated into light/dark, good/bad, white/Black. No longer immediately identifiable as “Lula's daughter,” she could thus enter the white world, albeit on a false passport, not merely passing, but trespassing.

Every day my grandmother rose from her bed in her house in a Black enclave on the south side of Chicago, sent her children off to a Black school, boarded a bus full of Black passengers, and rode to work. No one at her job ever asked if she was Black; the question was unthinkable. By virtue of the employment practices of the “fine establishment” in which she worked, she could not have been. Catering to the upper-middle class, understated tastes required that Blacks not be allowed.

She quietly went about her clerical tasks, not once revealing her true identity. She listened to the women with whom she worked discuss their worries - their children's illnesses, their husband's disappointments, their boyfriends' infidelities - all of the mundane yet critical things that made up their lives. She came to know them but they did not know her, for my grandmother occupied a completely different place. That place - where white supremacy and economic domination meet - was unknown turf to her white co-workers. They remained oblivious to the worlds within worlds that existed just beyond the edge of their awareness and yet were present in their very midst.

Each evening, my grandmother, tired and worn, retraced her steps home, laid aside her mask, and reentered herself. Day in and day out, she made herself invisible, then visible again, for a price too inconsequential to do more than barely sustain her family and at a cost too precious to conceive. She left the job some years later, finding the strain too much to bear.

From time to time, as I later sat with her, she would recollect that period, and the cloud of some painful memory would pass across her face. Her voice would remain subdued, as if to contain the still remembered tension. On rare occasions she would wince, recalling some particularly racist comment made in her presence because of her presumed, shared group affiliation. Whatever retort might have been called for had been suppressed long before it reached her lips, for the price of her family's well-being was her silence. Accepting the risk of self-annihilation was the only way to survive.

Although she never would have stated it this way, the clear and ringing denunciations of racism she delivered from her chair when advanced arthritis had rendered her unable to work were informed by those experiences. The fact that self-denial had been a logical choice and had made her complicit in her own oppression at times fed the fire in her eyes when she confronted some daily outrage inflicted on Black people. Later, these painful memories forged her total identification with the civil rights movement. Learning about the world at her knee as I did, these experiences also came to inform my outlook and my understanding of the world.

My grandmother's story is far from unique. Indeed, there are many who crossed the color line never to return. Passing is well-known among Black people in the United States and is a feature of race subordination in all societies structured on white supremacy. Notwithstanding the purported benefits of Black heritage in an era of affirmative action, passing is not an obsolete phenomenon that has slipped into history.

The persistence of passing is related to the historical and continuing pattern of white racial domination and economic exploitation that has given passing a certain economic logic. It was a given to my grandmother that being white automatically ensured higher economic returns in the short term, as well as greater economic, political, and social security in the long run. Becoming white meant gaining access to a whole set of public and private privileges that materially and permanently guaranteed basic subsistence needs and, therefore, survival. Becoming white increased the possibility of controlling critical aspects of one's life rather than being the object of others' domination.

My grandmother's story illustrates the valorization of whiteness as treasured property in a society structured on racial caste. In ways so embedded that it is rarely apparent, the set of assumptions, privileges, and benefits that accompany the status of being white have become a valuable asset that whites sought to protect and that those who passed sought to attain - by fraud if necessary. Whites have come to expect and rely on these benefits, and over time these expectations have been affirmed, legitimated, and protected by the law. Even though the law is neither uniform nor explicit in all instances, in protecting settled expectations based on white privilege, American law has recognized a property interest in whiteness that, although unacknowledged, now forms the background against which legal disputes are framed, argued, and adjudicated.

My Article investigates the relationships between concepts of race and property and reflects on how rights in property are contingent on, intertwined with, and conflated with race. Through this entangled relationship between race and property, historical forms of domination have evolved to reproduce subordination in the present.

In Part II, I examine the emergence of whiteness as property and trace the evolution of whiteness from color to race to status to property as a progression historically rooted in white supremacy and economic hegemony over Black and Native American peoples. The origins of whiteness as property lie in the parallel systems of domination of Black and Native American peoples out of which were created racially contingent forms of property and property rights. I further argue that whiteness shares the critical characteristics of property even as the meaning of property has changed over time. In particular, whiteness and property share a common premise - a conceptual nucleus - of a right to exclude. This conceptual nucleus has proven to be a powerful center around which whiteness as property has taken shape. Following the period of slavery and conquest, white identity became the basis of racialized privilege that was ratified and legitimated in law as a type of status property. After legalized segregation was overturned, whiteness as property evolved into a more modern form through the law's ratification of the settled expectations of relative white privilege as a legitimate and natural baseline.

Part III examines the two forms of whiteness as property - status property and modern property - that are the submerged text of two paradigmatic cases on the race question in American law, Plessy v. Ferguson and Brown v. Board of Education. As legal history, they illustrate an important transition from old to new forms of whiteness as property. Although these cases take opposite interpretive stances regarding the constitutional legitimacy of legalized racial segregation, the property interest in whiteness was transformed, but not discarded, in the Court's new equal protection jurisprudence.

Part IV considers the persistence of whiteness as property. I first examine how subordination is reinstituted through modern conceptions of race and identity embraced in law. Whiteness as property has taken on more subtle forms, but retains its core characteristic - the legal legitimation of expectations of power and control that enshrine the status quo as a neutral baseline, while masking the maintenance of white privilege and domination. I further identify the property interest in whiteness as the unspoken center of current polarities around the issue of affirmative action. As a legacy of slavery and de jure and de facto race segregation, the concept of a protectable property interest in whiteness permeates affirmative action doctrine in a manner illustrated by the reasoning of three important affirmative action cases - Regents of the University of California v. Bakke, City of Richmond v. J.A. Croson & Co., and Wygant v. Jackson Board of Education.

Whiteness as property has carried and produced a heavy legacy. It is a ghost that has haunted the political and legal domains in which claims for justice have been inadequately addressed for far too long. Only rarely declaring its presence, it has warped efforts to remediate racial exploitation. It has blinded society to the systems of domination that work against so many by retaining an unvarying focus on vestiges of systemic racialized privilege that subordinates those perceived as a particularized few - the “others.” It has thwarted not only conceptions of racial justice but also conceptions of property that embrace more equitable possibilities. In protecting the property interest in whiteness, property is assumed to be no more than the right to prohibit infringement on settled expectations, ignoring countervailing equitable claims that are predicated on a right to inclusion. It is long past time to put the property interest in whiteness to rest. Affirmative action can assist in that task. Affirmative action, if properly conceived and implemented, is not only consistent with norms of equality, but is essential to shedding the legacy of oppression.