Reconstruction and Racial Nativism: Chinese Immigrants and the Debates on the Thirteenth, Fourteenth, and Fifteenth Amendments and Civil Rights Laws 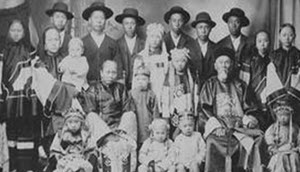 [T]he Chinese do not desire to become citizens of this country, and have no knowledge or appreciation of our institutions. Very few of them learn to speak our language.... To admit these vast numbers of aliens to citizenship and the ballot would practically destroy republican institutions on the Pacific coast, for the Chinese have no comprehension of any form of government but despotism, and have not the words in their own language to describe intelligibly the principles of our representative system.

This statement from the 1877 Report of the Joint Special Committee to Investigate Chinese Immigration reflected widespread perceptions of Chinese immigrants, who were the principal group of Asian immigrants present in the United States during the late nineteenth century. During the congressional debates on the Reconstruction amendments, members of Congress articulated concerns and fears about the threat posed by Chinese immigration to American institutions and society. Their statements in these debates prefigured the arguments used to justify exclusion in subsequent legislative enactments and the perceptions and treatment of other Asian immigrant groups. This Article shows that members of Congress during the Reconstruction debates perceived the threat posed by Chinese immigrant suffrage to “republican institutions” as based on cultural and “racial” differences.

The Article will also explore the limited protection that these constitutional and legal developments, which preceded the Chinese exclusion acts by several years, extended to Asian immigrants in the broader context of judicial decisions concerning citizenship and the citizenship status of Blacks. Historically, the locus of racially discriminatory law has been the states. For example, the law of slavery was principally a matter of colonial and then state law. The Reconstruction amendments created the federal power to police discriminatory state laws. However, later judicial interpretations limited the reach of that federal power, making possible the new regime of state discrimination known as “Jim Crow” laws. Thus federalism and arguments about the scope of federal power are central to the questions of equal citizenship and minority rights.

Three important themes emerge from the debates on the constitutional amendments and civil rights laws. First, while the discussion on Asian American history at the federal level often starts with Chinese exclusion in 1882, the presence of Chinese immigrants affected earlier federal legislation. The deliberate and careful choice of language in the Reconstruction amendments and laws, regarding words such as “citizens,” “aliens,” or “inhabitants,” was made with these immigrants in mind and is particularly significant given the continuing debate on immigration. Second, contradictory views were held of Chinese immigrants. On the one hand, they were viewed as racially inferior and in need of protection. On the other hand, there was a deep fear of granting them political power as they were seen as threatening white Christian hegemony. Third, American citizenship was redefined to include persons other than white men. The congressional debates on citizenship for Blacks included discussions of Chinese immigrants because they were in the United States, and their very presence made necessary a determination of their possible inclusion as citizens. I focus on the suffrage and naturalization discussions because the relationship between these issues and the Chinese immigrants' presence were most troubling to white supremacist Congress members.

Congress members' statements during Reconstruction represent some early articulations of what legal scholar Neil Gotanda calls the “racial association of Other non-Whites with foreignness.” For this reason, Asian Americans are often not recognized as “American.” Being positioned as “foreign” is something that Asian Americans, even to the fifth generation in this country, constantly face. As Gotanda has shown, the “separability of the juridical categories of 'citizen’ and 'alien’ [related to] the parallel [racialized] social distinction between 'American’ and 'foreign,”’ creating an ideological presumption of “foreignness” based on “Other non-White” racial status that influenced judicial outcomes in the nineteenth and twentieth centuries. Gotanda illustrates his thesis by discussing the 1854 People v. Hall and the 1898 United States v. Wong Kim Ark decisions.

In this Article, I demonstrate that this system of categorization (American/foreign) informed (1) Reconstruction era congressional discussions about legislative initiatives and proposed constitutional amendments, and (2) the post-Reconstruction Supreme Court decisions upholding the Chinese exclusion laws. I start from the premise that “race” is socially constructed. “Race” can be conceptualized as “an unstable and 'decentered’ complex of social meanings constantly being... formed and transformed... through political contestation over racial meanings.” “Race” includes systems of racial categorization. Changes in the meanings attached to racial categories can occur in constitutional, judicial, legislative, academic, and popular discourse. Law can be seen as ideological, “both constitutive of, and structured by, society” and existing “as part of the complex of implicit and explicit understandings within which we live and act.” If law constitutes “race” by providing authoritative understandings and definitions of “race,” then the examination of historical statements from legislative and judicial discourse about Asian immigrants itself allows for a better understanding of historical and contemporary “race.” The premises that (1) “race” is socially constructed and transformed through political contestation and (2) the law's ideological dimension has continuing significance for “race” account for the extensive quotations about Chinese immigrants from the debates. Chinese immigrants were “race-ed” (defined as a racial category and their political status as a “race” demarcated) in part through the congressional discussions of Chinese immigrants during Reconstruction. This racialization of Chinese immigrants in turn affected the legal outcomes in the Supreme Court decisions which upheld the Chinese Exclusion Laws.

In this Article, “Asian” is used to denote the racial category used in Anglo-American and European societies to describe persons whose ancestors lived in “Asia.” The legally and discursively constructed boundary of the geographical and/or racial category “Asia” and “Asians” has varied over time in American immigration and naturalization law and public discourse. “Chinese” is often used as shorthand to represent heterogenous Asian groups. Such use is inappropriate given the diversity of the immigrant stream from Asia since the late nineteenth century. I use the term here because Chinese immigrants are the relevant group in the historical period that is the focus of this Article. I use the term Chinese “immigrant” deliberately. Much of the post-Reconstruction, anti-Chinese rhetoric and agitation were premised upon a claim that Chinese were not in fact immigrants, but mere “sojourners,” unlike European migrants to the United States. This alleged difference in these groups' relative interest in becoming “American” was one basis for the systematic denial of rights and opportunities to, and the enactment of discriminatory laws directed at, Chinese immigrants.

Part I of this Article provides background on (a) the historiography of Reconstruction scholarship and its relationship to racial history, (b) a historiography of the definition of racial nativism particularly with respect to Asian Americans, and (c) the state-level legal-historical background for the later federal legislative exclusion of Chinese immigrants.

Part II summarizes the congressional debates on the Reconstruction constitutional amendments and laws, focusing on the discussion of Chinese immigrants then to show that racial nativist views were prevalent.

Part III examines the Supreme Court decisions which upheld the Chinese Exclusion Laws to show that racial nativist rationales similar to those articulated in the earlier congressional debates were a factor in these decisions as well. I conclude with a brief discussion on the relationship of the contemporary resurgence of racial nativism to these historical phenomena.

Congress and the courts were arenas in which “race-based” determinations about membership and access to membership in the American polity were made. Reconstruction-era Congress members' perceptions about Chinese immigrants reflected an ideological construction of the Chinese as a “foreign” group whose deep-seated, ineradicable cultural, political, and religious differences rendered them undesirable as prospective members of the polity. Congress members expressed fear that Chinese migration and suffrage threatened white supremacy on the west coast. The subsequent enactment of Chinese exclusion laws may have rendered moot the fears of Chinese “inundation.”

Reconstruction era constitutional amendments and civil rights laws did provide some protection to Asians in the United States. In particular, the provisions of the first Enforcement Act in 1870 relating to testimonial exclusion and selective taxation benefited Chinese immigrants. Later judicial interpretations of the Fourteenth Amendment also benefited them. However, legal protections for Asians in the United States were circumscribed along with those of the African freedmen and women by the Supreme Court's interpretations of the scope of protection afforded by these amendments and laws.

In recent years there has been increasing discussion of immigration issues in national political and intellectual discourse. This in turn has led to legislative initiatives at the state and the federal level, to restrict immigration. The views expressed by contemporary advocates of immigration restriction resonate with the historical constructions of Chinese immigrants as unassimilable, foreign, inferior, dangerous and ineligible to be “American.” Both the historic and the contemporary views reflect an ideological construction of the American nation as “white.” This white supremacist national identity, if it exists, was created in part through the exclusion of immigrant groups, particularly Asians, deemed racially inferior and undesirable.

A sampling of the contemporary views which illustrates the resurgence of racial nativism as a significant factor in American public life includes the following recent events. Senator Alan Simpson, Republican of Wyoming, a leading immigration reformer, stated in a 1981 Select Commission report that

[a]lthough the subject of the immediate economic impact receives great attention, assimilation to fundamental American public values and institutions may be of far more importance to the future of the United States. If... a substantial portion of the newcomers and their descendants do not assimilate... [and] linguistic and cultural separatism rise above a certain level, the unity and political stability of the nation will in time be seriously eroded.

In a June 1993 program on immigration, news commentator David Brinkley read a letter from “a middle-aged woman” which stated:

Will I or my children see the end of our United States, as we have known it? Will we see the end of our 350-year-old legal and social system and our language, washed away in a flood of immigrants, legal and illegal, while we who have lived here for generations are allowed to have nothing whatever to say about it?

Racial nativist attitudes have been brought to the surface in the 1996 primaries to the presidential race by Republican candidate Patrick Buchanan. On the topic of immigrants and assimilability to American institutions, Buchanan stated:

“If we had to take a million immigrants in, say, Zulus, next year or Englishmen, and put them in Virginia, what group would be easier to assimilate and cause less problems?”

During the 1992 presidential election, Buchanan proposed building a “Buchanan ditch,” a concrete-buttressed fence and ditch along the U.S.-Mexican border to stop Mexican immigration.

In 1993 Governor Wilson of California proposed that children of “illegal aliens” born in the United States should be excluded from birthright citizenship. He blamed California's budget problems on refugee and immigrants of color welfare recipients, and proposed reducing recent immigrants' eligibility for benefits. In 1994, California voters passed “Proposition 187,” which provides for, among other things, a system of cooperation and notification between state agencies and the Immigration and Naturalization Service when “illegal aliens” seek primary, secondary or post-secondary education, publicly-funded non-emergency health care, or other benefits, and for criminal penalties for the production or use of false documentation for immigration purposes. Section one of the proposition states:

The People of California find and declare as follows:

This initiative resonates with historic state anti-Chinese legislation directed towards preventing or reducing Chinese immigration to California. The impetus for Proposition 187 was the contemporary resurgence of racial nativism. Relief from this product of state-level majoritarian processes is being sought through the courts, a development which also is consistent with the history of litigation challenges to restrictive immigration legislation. “Race” has as at least as much to do with these political developments, as the current economic climate. Deep-seated views about the racial inferiority of non-white immigrants are a factor that needs to be understood as influential, and perhaps central, in the current debates on and legislative changes affecting United States immigration policy.