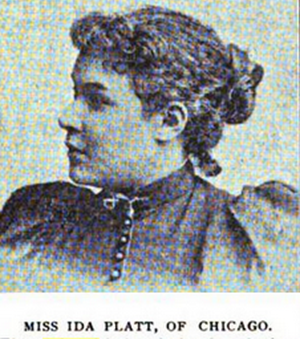 Ida Platt was admitted to the Illinois bar in 1894. She was one of approximately 8000 attorneys in the state, but just the forty-third woman, the thirtieth African American, and the first African American woman to win a law license. Those who participated in her admission were aware of the significance of the occasion. One of the state supreme court justices who signed Platt's license explained, “We have done today what we have never done before--admitted a colored woman to the bar; and it may now truly be said that persons are admitted to the Illinois bar without regard to race, sex or color.” Black civil rights activists used Platt's achievement as an example of the intellectual ability of African Americans and considered it a milestone in the movement for racial and sex equality. But society nevertheless continued to discriminate based on race, sex, and color, especially against those who stood at the intersection of race and gender prejudices.

Over the next several decades, Platt was able to overcome some of that discrimination by choosing to pass as white in her professional life and deciding not to take on the role of wife or mother. These choices allowed her to maintain a law practice in Chicago for thirty-three years, but required her to remain mostly isolated from the Black legal community, the community of white women lawyers, and the community of Black intellectuals and activists that were operating in the city.

This Article attempts to explain Ida Platt's agency and to uncover how she established and negotiated her own identity through time. There are no known documents, however, in which Platt discusses or acknowledges any of her choices or decisions. She did not give public speeches, publish articles, write editorials, or speak with reporters. In all the known writings that survive regarding Ida Platt, only a few legal documents include her words; Platt's personal voice remains virtually silent. This Article, therefore, reconstructs Platt's life through examination of census records, city and legal directories, death and cemetery records, newspaper accounts, corporate records, and association minutes and reports. It then uses this evidence of Platt's actions to examine her choices and to percolate on what they suggest about her lived experience of race and gender in American society during the critical period when it moved from a social and legal system of Reconstruction and equality to an era of Jim Crow segregation and discrimination.

Platt's life is an illustration of the inconsistencies of race and gender in American history. Her story is important because of Platt's choice to become a lawyer, an official actor within a system that sought to oppress her. As Edith Sampson, one of Chicago's earliest and most accomplished Black women lawyers, articulated in 1935: “[Our] entrance into this conservative profession is a part of that larger effort of women to become oriented in modern society, a society in which, whether praised or condemned, the profession of law plays one of the vivid parts.”

Platt's story is also important because of her refusal to remain within a single racial identity in a society that required it. American society has, from its inception, created and maintained a social hierarchy based on race and sex that places Black women on one of its lowest rungs. Platt refused to stay there.

The first two Parts of this Article focus on the development of Platt's racial and gender identity and her career. Part I explores Platt's life as a “colored” woman who came of age in the decades after the Civil War. Platt's initial identity was formed during the historical moment of Reconstruction's ideology of equality, but she decided to become a lawyer after that moment had given way to a Jim Crow inequality. Part I situates Platt's experiences among those of Black women lawyers and the activism of white and Black women at the turn of the twentieth century. It argues that the racist and sexist regimes that dominated at this time led Platt to employ a more fluid racial identity to avert some of the exclusions and discriminations those regimes perpetuated. Part II examines the constructions of race in the United States and the phenomenon of passing, exploring Platt's choice to employ this fluid racial identity. It further assesses her acts of passing to illustrate how Platt's lived experience of race, as it intersected with gender, contested the dominant constructions and adherent limitations of those statuses.

The next three Parts of this Article examine the effects of Platt's choice to use a fluid racial identity, offer a comparative analysis, and assess how Platt's life informs twenty-first century debates on the role of race in law. Part III examines Platt's passing as temporary and explores the response of the Black community to her passing and her career. It argues that the Black community did not view Platt as a race traitor, but rather accepted Platt's fluid racial identity as necessary to overcome the inequalities and limitations attendant to the dominant racist and sexist regime. Part IV explores Platt's choice to move to England at the end of her life. It examines the experiences of Anglo and colonial women lawyers in the United Kingdom and race discrimination in Britain, demonstrating a hostility to women lawyers, particularly women lawyers of color, in the first half of the twentieth century that further encouraged Platt's passing. Part V explores how Platt's life has been misused in the twenty-first century as an example of race progress and assesses how Platt's life informs the twenty-first century debate on race identity, race unity, and the movement for a colorblind society. Platt's story suggests that allowing individuals to choose their own identities and pathways is important to the recognition of the diversity of Black experiences, but that eliminating legal categories of race does not eliminate race discrimination.

This Article concludes that Platt's identity choices allowed her to overcome the laws and practices of race and gender discrimination that denied her opportunities to work in her chosen profession, live where she wanted to live, and marry whom she wanted to marry. Even as her self-identification empowered her, it came at a cost, restricting her from engaging in the movements for racial and gender justice. Though her personal choices contested systemic oppressions, racial and gender hierarchies that discriminated against Black women remained in place.

In the decades after the Civil War, white and Black women lawyers in the United States struggled against the masculine character of the legal profession. They fought to break down the barriers that prevented women from practicing law. By the 1890s, the number of women lawyers in Illinois had grown sufficiently to allow some women to believe that they could focus on their practices rather than spend their time as activists. Platt was one of these women lawyers who entered the profession in Chicago in the 1890s. Although most who wrote about her admission focused on her unique position as the state's first African American woman lawyer, Platt's activities suggest that she identified herself as just one of the many new women in the field.

The intersection of Platt's race and sex, however, presented tremendous obstacles. Her contemporaries, Black women lawyers admitted to the bar during the nineteenth century, were unable to overcome these obstacles. Instead they worked primarily as teachers, a more traditionally gender-appropriate profession. Platt developed an alternative path. Taking advantage of her education, light skin color, and European appearance, Platt passed as white in her professional life. Those who pass without incident or disclosure rarely tell their stories. Platt's story provides unique insight into this kind of passing. It serves as one case study of an individual who chose to pass pragmatically during “the period in which 'passing’ was a significant feature” of overcoming race discrimination.

Platt's story should not be construed as either a celebration or a condemnation of passing. Her choice allowed her to pursue her chosen occupation and support her family, but it did not undermine race discrimination against Black women lawyers. The act of passing or having a fluid racial identity was a means of race destabilization, which was one aspect of the campaign for racial justice. But Platt's story demonstrates what critical race theorists portend: that destabilizing race alone will not secure racial justice.

For those who believe that race consciousness is critical to consolidating and motivating a collective consciousness to fight against the “structural misuse of race,” Platt's story is frustrating. She failed to openly engage in her “obligation to pursue [ ] antiracism through black solidarity.” She did not ultimately reveal her Black identity. But rather than view her story through that perspective, one should see that her story illustrates the complexity of the lived experience of race and gender and one woman's agency in overcoming the racist and sexist barriers she encountered. The extreme prejudice and discrimination that Black women experienced caused all other Black women lawyers of Platt's generation to leave the legal profession. Platt, alone, persevered because she chose her own identity.