Lawyering from a Deportation Abolition Ethic 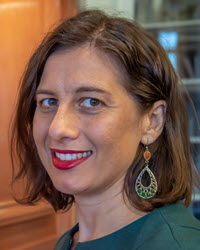 Calls for police abolition have taken a national stage due to uprisings after the killing of George Floyd and many other Black people at the hands of police. Protestors target the institution of policing--rather than individual bad actors--and assert that the key to addressing police violence is less policing, perhaps even no police. Many of these protestors identify as carceral abolitionists, who seek to end “the overlapping interests of government and industry that use surveillance, policing, and imprisonment as solutions to economic, social, and political problems,” also called the “prison industrial complex.” Carceral abolitionists assert that racist state violence is inherent in policing systems and that policing has been used historically through the present to control and punish Black and Brown communities. Rather than seeking reforms, carceral abolitionists seek the complete dismantling of the prison industrial complex in furtherance of a positive vision of community safety and healing. This is true within the immigration landscape as well. Immigration policing, surveillance, and detention centers are one part of the prison industrial complex's larger interlocking systems of racist social control. Deportation abolitionists seek to end immigrant detention and deportation, explicitly understanding immigrant justice as part of a larger struggle for racial justice.

Momentum is growing in the immigrant rights community with advocates offering a vision of deportation abolition. As early as 2013, the #Not1More Deportation campaign called for the end of deportation of all immigrants, challenging the premise of President Obama's immigration plan that called for protecting worthy immigrants while increasing militarization of the border and expanding enforcement. He famously articulated this plan of prioritizing deportations for “Felons, not families. Criminals, not children. Gang members, not a mom who's working hard to provide for her kids.” While mainstream immigrant advocacy largely supported these plans, some immigrant organizers critiqued President Obama's immigration agenda of expanding enforcement and criminalization of migrants, calling him the “Deporter-in-Chief.” By the summer of 2018, campaigns to “Defund Hate” and “Abolish ICE” had gained traction in a national dialogue over defunding immigration enforcement couched in deportation abolition. In 2020, a national campaign to “Free them All” followed, which advocated for releasing detained immigrants as well as all other people serving time in prisons and jails. In July 2020, more than four hundred immigrant rights and ally organizations wrote an open letter pledging to “[w]ork[] to dismantle white supremacy, white nationalism, and the anti-Blackness that permeates our society, including within the immigrant justice movement” and stand in solidarity with Black communities. These actions fall within the spectrum of a deportation abolition agenda in solidarity with immigrant communities to defund, delegitimize, and dismantle immigration law enforcement, particularly Immigration and Customs Enforcement (ICE). ICE is the immigration agency tasked with interior enforcement, which includes arresting, detaining, and deporting those suspected of violating immigration laws. Deportation abolitionists reject criminalizing language that relies upon and legitimizes stereotypes of good immigrants deserving of protections and undeserving ones who should be deported.

The confluence of the uprisings in the aftermath of George Floyd's death, anti-Asian violence, and xenophobia, combined with the focus on the immigration detention system during the COVID-19 crisis have made calls for abolition more urgent. In recent years, some “unapologetically abolitionist” immigrant rights initiatives have emerged, as well as individual immigrant defense attorneys who may personally identify as “abolitionist.” This is in stark contrast to the major immigration lawyer associations which seemingly reinforce the carceral system by focusing on due process reforms at the expense of advocating for abolition of detention and deportation.

The few legal scholars examining carceral abolition theory in the immigration context have flushed out the contours of deportation abolition theory, without mapping that theory specifically into lawyering practice. This Article addresses the need to apply theory to practice. It also engages with broader crimmigration scholarship, which provides an expansive and detailed accounting of the parallels in the immigration and criminal legal systems, the punitive nature of immigration surveillance, imprisonment, enforcement, and the racial animus animating immigration law design and implementation. Yet, crimmigration scholars, including myself, have largely focused on reforms to expand access to counsel, shift to alternatives to detention including the use of ankle bracelets, train judges, prosecutors, and officers, and suggest tweaks to specific regulations and statutes. While these reforms may have immediate incremental benefits to some individuals, they may also inadvertently serve to legitimize the immigration deportation system, specifically immigration surveillance, policing, prisons and prosecution. Some of these reforms necessitate investing more funds into agency budgets with the unintended consequence of expanding, rather than contracting, the deportation state.

Carceral abolition stems from a deep critique of the prison industrial complex--broadcasting an objection to the combined power of state and private markets working together to profit from subjugating Black and Brown people. Small but increasing numbers of immigration lawyers who practice and advocate within the immigration legal system are engaging with deportation abolition, seeking to end immigration policing, prisons, and deportation. This Article identifies tensions that exist for lawyers who are practicing within a system they seek to upend, and how these tensions can be addressed. Relying upon the strategies of current deportation abolition initiatives, this Article illuminates how lawyers can practice a deportation abolition ethic by following an antiracist orientation, building community power, and insisting on structural change and non-reformist reforms. By employing this ethic, immigration lawyers can and should work simultaneously to mitigate daily harms in the immigration legal system while also holding broader visions to dismantle immigration enforcement and detention. This Article calls on immigration lawyers, organizations, and associations to play their part in dismantling the racist immigration detention and deportation system and demanding investment in immigrant communities. Ultimately, lawyers can help shift toward the horizon of abolition and a society grounded in liberation and justice.