Excerpted From: Derek H. Kauanoe and Breann Swann Nu'uhiwa, We Are Who We Thought We Were: Congress' Authority to Recognize a Native Hawaiian Polity United by Common Descent, 13 Asian-Pacific Law and Policy Journal 117 (2012) (222 Footnotes Omitted) (Full Document) 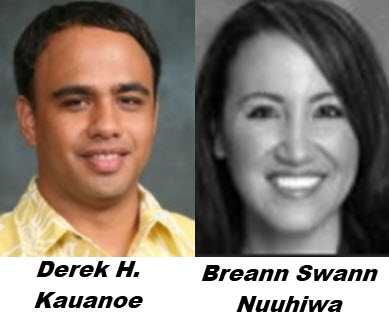 During a floor debate in the United States House of Representatives, Congressman Eni Faleomavaega of American Samoa explained that, of the three distinct indigenous groups living within the United States proper, only Native Americans and Alaska Natives possess formal government-to-government relationships with the United States federal government. Native Hawaiians, on the other hand, have yet to be afforded the same treatment as our other first Americans. As Congressman Faleomavaega subsequently pointed out, the responsibility to rectify this disparity is a moral imperative on the part of our government.

[Native Hawaiians] deserve this. They are not begging for anything. Just give them proper recognition .... [T]he status of the indigenous Native Hawaiians was never properly addressed by the United States Congress. And it is within Congress' constitutional authority to do so.

Ryan Garcia, a 2010 graduate of the California Western School of Law who describes himself as a citizen of the United States of America and an Ethnic Hawaiian, takes issue with the proposed Act's use of Native Hawaiian descent as a criterion for participation in the initial reorganization of the Native Hawaiian polity. Using a standard anti-discrimination analysis that is inapplicable in the context of Native governance issues, Garcia mischaracterizes the Native Hawaiian people as an ethnic group without a shared political history, and proceeds to challenge the federal government's authority to acknowledge such a group as self-governing. Garcia further argues that, to the extent Native Hawaiian descent is treated as a permissible membership criterion, it must be accompanied by a high blood quantum requirement to ensure that the members of the initial Native Hawaiian polity are asserting a legitimate racial identity, as opposed to a mere ideological self-identification. Dehumanizingly comparing Native Hawaiian people to cups of Kona coffee, Garcia contends that [a]n ethnic blood quantum of 50.01% ... is logically necessary to establish a legitimate racial identity, but ultimately suggests that a fifty percent blood quantum may be more practicable, given the quandary posed by persons with fifty percent Native Hawaiian blood.

Opponents of Native Hawaiian self-governance who seek to maintain the current imbalance of material wealth and political power in Hawai'i will likely attempt to promote Garcia's comment as an authoritative historical and legal analysis in furtherance of their own agendas. Therefore, the comment's errors and omissions must be exposed in order to prevent undue interference with the already protracted and difficult struggle of the Native Hawaiian community to repatriate its self-governing authority.

The comment's main deficiency is its consistent failure to provide sufficient support and context for its most controversial assertions. For example, when discussing the issue of blood quantum, Garcia asserts as a basic fact the notion that possession of a relatively greater proportion of ethnic blood more closely ties an individual to a particular ethnic history or genealogy as compared to an individual possessing a lesser proportion of ethnic blood. The sole authority that Garcia cites for this proposition carefully points out that she is simply expressing her personal opinion, not a fact, and she directs her readers to the recently published book of an esteemed colleague who would probably disagree with her. Garcia does not meaningfully address that book or any other part of the large body of scholarship that explores the complex relationship between blood quantum, identity, and community membership.

Similarly, Garcia asserts that the United States Supreme Court cases of United States v. Sandoval and Montoya v. United States, and the Ninth Circuit Court of Appeals case of Native Village of Tyonek v. Puckett, collectively require legislative acknowledgments of Native polities to pass muster under an Express Grants Parameter--a four-pronged test of Garcia's own creation that he acknowledges has never been applied by any court. Pursuant to this fictional test, Garcia purports to invalidate not only the proposed Native Hawaiian Government Reorganization Act, but also the legislative acknowledgements of the Ponca Tribe, Ysleta del Sur Pueblo, and the Alabama and Coushatta Indian Tribes of Texas. Garcia's analysis of this issue lacks any careful legal or historical analysis of the interaction between the executive, legislative, and judicial branches with regard to the federal acknowledgment of Native peoples, especially as that interaction pertains to Native Hawaiians. Such analysis is crucial to understanding the process of federal acknowledgment and the proposed Native Hawaiian Government Reorganization Act.

Garcia's crafting of the so-called Express Grants Parameter exemplifies another global issue with the comment-- its unusually heavy reliance on invented legal concepts and terms of art. Throughout the comment, terms like ethnic Hawaiian, Blood Trust, and Hawaiian Blood Trust are used as though they have an established meaning in law and legal discourse. In truth, Garcia crafted these terms, without meaningful explanation or authority, for purposes of the comment. Moreover, where Garcia uses terms and concepts that do have an established meaning in law and legal discourse--such as cultural sovereignty--he does not always use them correctly, leading the reader to misunderstand certain fundamental ideas about Native self-governance.

The comment is also rife with plain misstatements of fact. For instance, Garcia asserts that the proposed Native Hawaiian Government Reorganization Act is novel in that it is the first Congressional attempt to federally recognize a non-Indian entity, and to do so in a fashion inconsistent with the political history of the former governing entity it is ostensibly recognizing. To the contrary, the Alaska Native Claims Settlement Act, passed by the United States Congress in 1971, recognizes the unique political status of Alaska Natives and provides for the exercise of Alaska Native self-governance through contemporary Native corporations. Such misstatements of fact delegitimize Garcia's claims.

Garcia also misrepresents that a majority of Hawaii's residents oppose the proposed Native Hawaiian Government Reorganization Act. Garcia bases this statement primarily on the findings of an online survey commissioned by the Grassroot Institute of Hawaii, a conservative think tank opposed to the Act. The Institute's survey of 501 registered voters found that fifty-one percent of the polled voters opposed the proposed Act. However, the corporation commissioned to conduct the poll admits that the survey's margin of error is +/- 4.5 percentage points. Therefore, even if one were to assume for the sake of argument that the corporation's sampling produced an accurate representation of Hawai'i's residents, the 4.5 percentage point margin of error would render the survey results inconclusive as to whether more than fifty percent of Hawai'i's residents oppose the proposed Act.

Based on these questionable facts and contentions, among others, Garcia concludes that the United States Congress may not properly enact the proposed Native Hawaiian Government Reorganization Act in recognition of the self-governing authority of the Native Hawaiian people, united by common descent. Garcia further concludes that squaring Native descent-based membership criteria with the equal protection components of the United States Constitution would require the imposition of a high blood quantum requirement of fifty percent or more. Garcia would prefer, however, to see Native Hawaiian descent eliminated as a marker of community membership and replaced with need-based eligibility criteria for remedial programs, cultural criteria for cultural programs, and political history for federal recognition.

Part IV outlines the authority of the United States Congress to recognize a Native Hawaiian polity united by common descent.

Part V describes how blood quantum has been used consistently throughout United States history to preserve the dominant elite's power over marginalized communities such as African-American slaves and Native peoples. Part V concludes by explaining that an additional blood quantum criterion is not needed to establish legitimate Native Hawaiian identity or to bring Congress' recognition of the Native Hawaiian people within the scope of its constitutional authority.

While Congress' authority to transform a group into a domestic dependent nation and establish a trust relationship with that group might raise difficult questions under constitutional law, Congress' authority to acknowledge formally the existence of a preexisting Native polity with whom Congress has maintained a consistent trust relationship since the United States claimed the polity's territory is much less controversial. According to federal law, Congress has constitutional authority to federally recognize a Native people, such as the Native Hawaiian people, whose ancestors exercised governing authority within an area that the United States now claims as part of its territory. The Native people need not have an undisturbed history of self-governance in order to receive congressional recognition, but if such political continuity were an absolute legal requirement, the Native Hawaiian people would be able to satisfy that requirement, given the persistence of Native Hawaiian self-governance from historical times through the present.

[m]embership in a federally recognized tribe is a political, not racial, classification and is judicially significant. As the Supreme Court explained in Morton v. Mancari, the political nature of the relationship between the United States and federally recognized tribes requires courts to apply rational basis judicial scrutiny to, and thus uphold, laws rationally related to fulfilling that political relationship .... Mancari's distinction between political entities and racial groups is not a mere legal fiction.

A Native polity has the inherent authority to define its membership according to common descent, and Congress has the authority to legislate to extend federal recognition to a Native polity so constituted, so long as Congress' action is rationally related to fulfilling the federal government's trust relationship with that Native polity. Accordingly, Congress even has the authority to take actions that incorporate the concept of blood quantum--which is decidedly more racial in nature than the notion of descent--provided that there is a rational basis for considering blood quantum.

We do not mean to suggest, in conclusion, that federal recognition is the best way to protect the land, resources, and sovereignty of the Native Hawaiian people. The potential benefits and detriments that may flow from federal recognition must be carefully weighed in the context of the social, political, and economic goals that the community seeks to achieve. Our intent is simply to demonstrate that, to the extent that the community wants to avail itself of the benefits that federal recognition has to offer, Congress possesses the constitutional authority to extend that recognition, and the community's decision to exercise its inherent authority to define its membership according to common descent, without blood quantum requirements, does not preclude Congress from exercising its recognition authority.