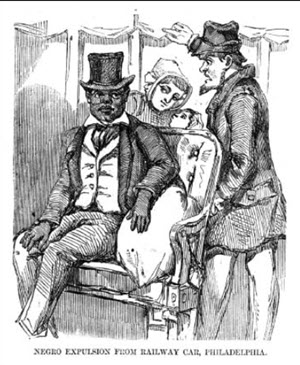 "Plessy v. Ferguson, 163 U.S. 537 (1896), was a landmark decision of the U.S. Supreme Court issued in 1896. It upheld the constitutionality of racial segregation laws for public facilities as long as the segregated facilities were equal in quality – a doctrine that came to be known as "separate but equal". The decision legitimized the many state laws re-establishing racial segregation that had been passed in the American South after the end of the Reconstruction Era (1865–1877). Wikipedia

"The decision was handed down by a vote of 7 to 1, with the majority opinion written by Justice Henry Billings Brown and the lone dissent written by Justice John Marshall Harlan. The Court ruled that the Louisiana law did not violate the Fourteenth Amendment to the U.S. Constitution, stating that although the Fourteenth Amendment established the legal equality of white and black Americans, it did not and could not require the elimination of all social or other "distinctions based upon color". The Court rejected Plessy's lawyers' arguments that the Louisiana law inherently implied that black people were inferior, and gave great deference to American state legislatures' inherent power to make laws regulating health, safety, and morals—the "police power"—and to determine the reasonableness of the laws they passed. . Wikipedia

"Plessy is widely regarded as one of the worst decisions in U.S. Supreme Court history. Despite its infamy, the decision itself has never been explicitly overruled. However, a series of subsequent decisions beginning with the 1954 case Brown v. Board of Education—which held that the "separate but equal" doctrine is unconstitutional in the context of public schools and educational facilities—have severely weakened Plessy to the point that it is generally considered to have been de facto overruled.. Wikipedia