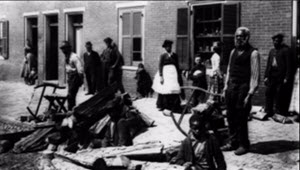 "The Civil Rights Cases, 109 U.S. 3 (1883), were a group of five cases in which the Supreme Court of the United States held that the Thirteenth and Fourteenth Amendments did not empower Congress to outlaw racial discrimination by private individuals. The decision has never been overturned, but in the 1965 case of Heart of Atlanta Motel, Inc. v. United States, the Supreme Court held that Congress could prohibit racial discrimination by private actors under the Commerce Clause. Wikipedia

During Reconstruction, Congress had passed the Civil Rights Act of 1875, which entitled everyone to access accommodation, public transport, and theaters regardless of race or color. In his majority opinion in the Civil Rights Cases, Associate Justice Joseph P. Bradley struck down the Civil Rights Act of 1875, holding that the Thirteenth Amendment "merely abolishes slavery" and that the Fourteenth Amendment did not give Congress the power to outlaw private acts of racial discrimination. Associate Justice John Marshall Harlan was the lone dissenter in the case, writing that the "substance and spirit of the recent amendments of the constitution have been sacrificed by a subtle and ingenious verbal criticism." The decision ushered in the widespread segregation of blacks in housing, employment, and public life that confined them to second-class citizenship throughout much of the United States until the passage of civil rights legislation in the 1960s." Wikipedia